Where have all these Oilers gone?

The Edmonton Oilers made their first seven cuts yesterday, but I wanted to look back a little bit farther than that and talk about all of the players that were employed by the Oilers during Steve Tambellini's tenure who have since left the organization. Amazingly, even though Tambellini was only the team's general manager for five seasons, 65 different players appeared in at least one NHL game while Tambellini was around only to have left the organization since.

Now, some of these players are very likely going to catch on somewhere: Tom Gilbert is likely to sign an NHL contract with somebody, Ryan Potulny has piled up points in his last two AHL seasons so he'll sign a pro contract somewhere eventually, and Colten Teubert seems like a strong candidate for an AHL contract after a trying summer is in the rearview mirror and things are mostly sorted out with his family.

One rung up the ladder are the twelve players attending an NHL camp, or on a contract that's likely to see them land in the AHL: 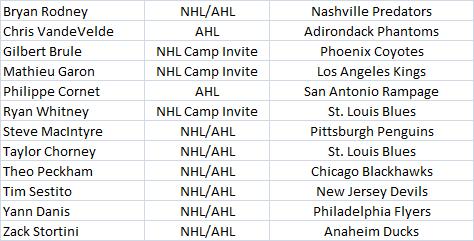 Do you remember who the Oilers traded for Bryan Rodney? Or what they got for Tim Sestito? This list is a trivia nightmare! The most surprising thing is perhaps how random it seems that these guys have survived. Steve MacIntyre, Zack Stortini, and Tim Sestito aren't better players than many on the unsigned list, but they're still going, and in all three cases, pulling down a six figure salary in the AHL. The guy in the best situation to move up? Probably Yann Danis. He may not make the team out of camp, but Ray Emery isn't exactly the most durable guy, and Steve Mason probably isn't a better goalie. The situation may have been similar when Danis first joined the Oilers, but this is another great opportunity for him.

Next up is a group of seventeen guys playing in Europe: 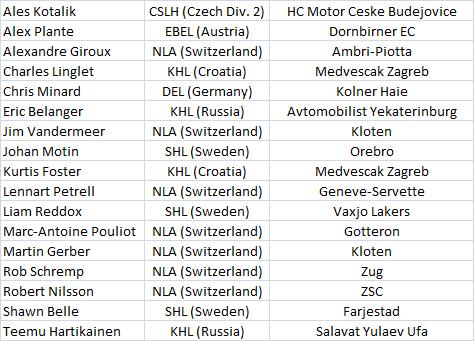 There are quite a few players on this list that I would have guessed had retired. Jim Vandermeer, Kurtis Foster, and Ales Kotalik are still finding work, and good for them. Alex Plante is also finding work, but I'm less convinced it's good for him (he didn't end up becoming an NHL player, but he did sustain a number of concussions). Then again, who am I to rag on a guy for making money playing hockey while spending a year in Austria. It sounds kind of awesome. As for the disconnect with Finland, that apparently goes both ways now as not a single former Oiler is playing in Finland.

Finally, we've got the thirteen Oilers who are still in the NHL: 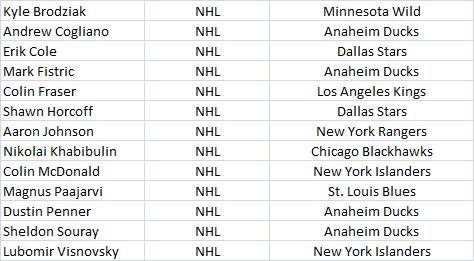 Most of these players were sent away for draft picks via trade, so there isn't actually a lot of cross-pollination here. If the Oilers could get their names on contracts, players like Erik Cole, Dustin Penner, and Lubomir Visnovsky may well be making this team a whole lot better even now. Assuming current cap hits with the exception of Eberle for whom I've assumed a bridge contract at 3.5M per season and Tom Gilbert for whom I've assumed his previous contract which carried a cap hit of 4.0M, an alternate version of the club could look like this today:

Now, a team that retained players like Cole and Visnovsky probably doesn't get the draft picks the Oilers got, so this alternate universe team is likely impossible, but it's a good reminder for me that anyone complaining about a lack of size up front or the need for a top pairing defender need only look to the players the Oilers have sent away for a fix.