Not an easy thing to do.

Share All sharing options for: Predicting Playoff Save Percentage 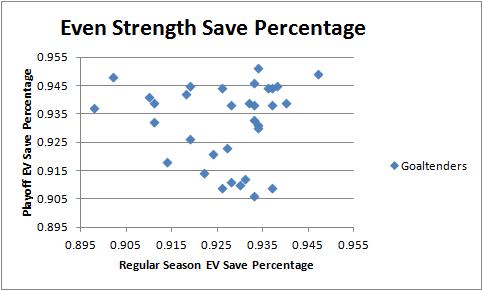 For whatever reason, regular season performance doesn't seem to be a good predictor of playoff performance in the same year. Now, twenty-three of the thirty-three goaltenders who qualified had an even strength save percentage of .923 or better during the regular season, so above-average starters were more likely to see at least 300 shots in the playoffs than their counterparts, but that's probably due in part to the fact that more above-average starters make the playoffs. I haven't yet collected the data on that, but will do so in a follow-up article this weekend.

So what's the takeaway here? For me it's that, if you're good enough to be a starting goalie in the NHL, you're good enough to play really well over a short sample but not so good that you couldn't be terrible. The playoffs are just too small a sample to separate the wheat from the chaff. Also of interest: these same goaltenders tended to save a higher even strength save percentage during the playoffs than they did during the regular season: 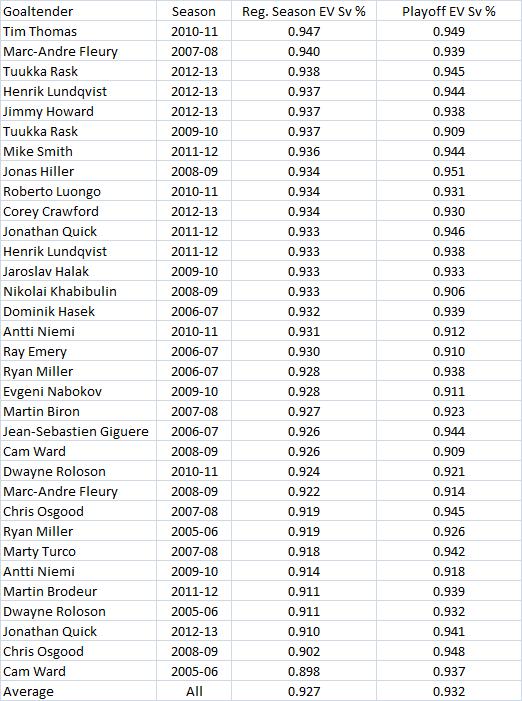 Hard to know why that would be the case. My first guess would be chance, but I suppose it's also possible that shot quality goes down slightly in the playoffs. That doesn't seem intuitive to me, but it could be the result of lengthy overtime games if players are more inclined to shoot from less desirable areas in that situation. What's not hard to know: Cam Ward is a terrible person for what he did in 2005-06.