Jason Smith's trade chain is a lesson in how not to manage a roster.

It's not often that a team turns their team captain and a 25-goal scorer into hired knuckles in the ECHL, but in trading Jason Smith, that's exactly what the Edmonton Oilers did. Smith served the Oilers valiantly on the blueline for 7 seasons after landing to Edmonton at the trade deadline in March of 1999. Smith served as team captain from 2001 until the day he was traded, including an outstanding playoff performance in 2006. Smith was nearing the end, and as a "playoff-type" veteran, he had no place on a directionless Oilers team.

But he, along with Lupul who was traded because he thought that hockey only existed in the offensive zone, above the high slot, brought back tremendous value for the Oilers: top-pairing defender Joni Pitkanen. From that point on, it was all downhill, and Smith's trade chain is a brutal reminder of the Lowe/Tambellini years in Edmonton.

*Click to enlarge the chart below. Get the full-sized chart here. 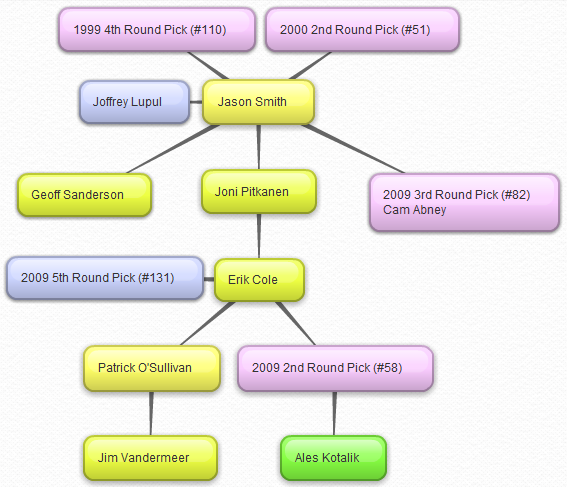 At various times in this chain the Oilers held: Jason Smith & Joffrey Lupul, Joni Pitkanen and Geoff Sanderson, Erik Cole, Patrick O'Sullivan, Ales Kotalik & Jim Vandermeer and in the end they managed to turn all of that into nothing, leaving behind Cam Abney.