Five years after being drafted, it seems as though Harski's time with the Oilers has come to a close

Sometimes when writing this series, it's obvious why a player moves down in the Top 25 Under 25 rankings. It could be that he had a bad season, or that he had bad luck, or that he got jerked around a bit by his coach, or that other players entered the pipeline, or that a player's relationship with the team reaches an impasse. In Teemu Hartikainen's case, it's probably a combination of all of these factors, which is why it's kind of impressive he only fell two spots, from #9 in February to #11 today.

In the previous rankings during last season, all nine writers had him within the top 10 -- now, only 2 of us do (Ben and Derek B), yet he's still within the top 14 of everyone's list after a season that could probably be referenced in the dictionary under the word "unfortunate". It was so unfortunate that he's decided to pull up stakes and play for Ufa in the KHL for the next two seasons.

Being 23 already, if by some miracle he actually comes back to play with the Oilers at the end of that 2-year contract, he'll be too old to qualify for this ranking. I'm guessing this means that unless he leads his KHL team in scoring or some other great feat, his widening distance from the club can only hurt his rankings from this point on. But give the guy some credit -- he's had a decent run! Here's a chart outlining Teemu's trajectory through these rankings over the last 3.5 years.

Outside of one 17th overall ranking halfway through Taylor Hall's first season in the NHL, Harski has consistently been a well-regarded prospect by the writers of CnB. The fact that he's maintained a near top-10 ranking in the face of all the new top-tier talent being added to the pipeline via perpetual top 10 picks in the draft is especially impressive. The #11 ranking today is MUCH more impressive than the #10 ranking in summer 2010, for instance.

He represented one of Stu's only decent shots at getting a non-first round pick to 200 NHL games played, having appeared in 52 so far in his career. Outside of Anton Lander's 67 games, the next nearest player Stu's selected after the first round to 200 games is Philippe Cornet, who maxed out at 2. And let's be honest, this isn't exclusively a Stu problem -- the Oilers haven't had a non-first round pick make it to 200 games in the NHL since Stortini & Brodziak in 2003.... players taken a decade ago.

So what happened? He was almost universally liked by the oilogosphere, as I'm sure some bloggers have written him into their wills at this point. From the outside looking in, he looks like a slam dunk. He's large. He's Finnish. He's got decent hands. He's not slow. He's physical. He drives to the net well. He can complement skill players. He's Finnish. Seriously, him not panning out with the team sounds like it requires a forensic investigation.

Firstly, let me just say that I was disappointed with his performance this season, especially in his 23 games with the Oilers. Objectively speaking, 1 goal and 2 assists in 23 games are only considered acceptable levels of output if you're talking about the worst of the worst NHL regulars, like Steve MacIntyre or Eric Belanger. And it's not like he was playing with crap -- his top linemates at even strength in order of ice time were: Magnus Paajarvi, Anton Lander, Eric Belanger, Sam Gagner, Shawn Horcoff, Jordan Eberle, and Ryan Nugent-Hopkins.

Secondly, he was unlucky. As in, historically unlucky. In over 196 minutes of icetime at 5 on 5 play, he was not on the ice for one goal for. Zero. Zero goals were scored while he was on the ice. Teemu skated around an NHL rink for three hours and 16 minutes of even strength gameplay, and not one goal was scored. I'm not making this up -- you could literally have watched Titanic through the end credits (195 minutes) in the time that Harski was on the ice at even strength this year without being on the ice for a goal. That has to be some kind of record. 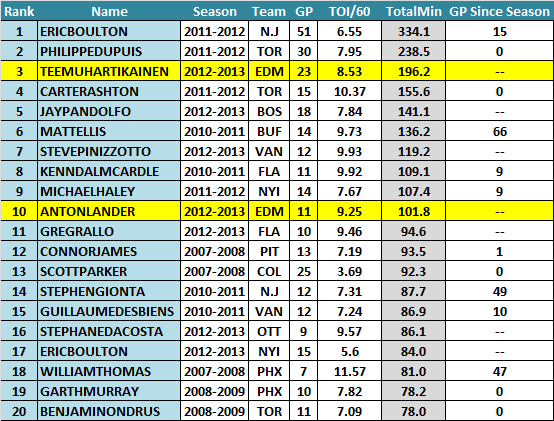 It's a pretty fascinating list, like a scrap heap of lost NHL souls. I added the "GP Since Season" column to show how many NHL games these guys got into since their disaster seasons, and it's really not that pretty. I'd imagine coaches tend to notice things like "seriously never being on the ice when a goal is scored, ever", especially when he's getting some icetime on your first and second lines, like Harski was given this season. Not a lot of guys on this list could likely make a similar claim.

His career Corsi% is 46.1%, which isn't bad considering the teams he played on, but isn't all that great either, considering Darcy Hordichuk had a 47.4% Corsi in similar minutes over the same time frame. The alchemy involved here shouldn't be all that surprising -- combine a middling rate of shot production with a quite putrid on-ice shooting percentage, and you have a guy who's out of the NHL. Have a look at the table I created above, and you realize that this stuff happens all the time. He was unlucky, sure, but you've got a window of opportunity to prove yourself when you're not a first round type of player, and let's be honest here: he didn't. I like the player a lot, I think he looked fine in the NHL, and likely would be better with a larger sample size, but the cold fact is that he had an open window and couldn't jump through it.

So, where does he go from here? Neal over at Tend the Farm just posted a great article where he asks Teemu directly about what happened and what his plans are. I won't get into too much detail so you'll click through the link, but Teemu wasn't offered a one-way deal by the Oilers, and doesn't sound all that much in a hurry to come back here. He'll get a chance to play with some skilled players in Ufa, and perhaps get some sustained time in the top 6 of their forward corps. As mentioned, he is only 23, and the Oilers have his RFA rights for the foreseeable future.

I'd be surprised if he makes it back over here in the next two seasons, since that's the length of his new contract in the KHL. Part of me would also be very surprised if he ever plays another game with the Oilers. Yesterday's signing of Jujhar Khaira signals that the organization is already moving on in their quest to find a true power forward. MacT brought in almost a clone of Harski in fellow Finn Jesse Joensuu. I'd be amazed if MacT doesn't try to get his hands on another "power" type forward over the next year. For anyone hoping that Harski finds his way back onto the team, you'd better hope he's a top 25 scorer in the KHL, because even then it would be a long road.