Toni Rajala is a television broadcaster's dream. He seems to get better against better competition.

Toni Rajala is the second player in the Top 25 Under 25 ranked in the top 20 by our entire panel and the fastest rising player within the summer top 25. Rajala was closer to #15 than he was to #17, so he's certainly captured the attention of our panel.

Alan, Bruce and myself helped to push Rajala up the list the most, raising him 11, 10 and 9 spots. In fact, Alan and Bruce both pushed Rajala into their top 15. It was Alan's 8 point differential between the David Musil that accounted for their 16/17 ranking. Everyone moved Rajala up except Michael, who has Rajala in neutral at 20.

Rajala came back to North America for his 21-year old season after two years in the SM-Liiga and his offense went off like a rocket. His NHL equivalencies are listed in the table below:

His 34 points was good for 8th on the 2012-13 Edmonton Oilers. His equivalencies increased, but was it a result of luck? Prior to last season, Rajala hadn't demonstrated that level of offensive production. Did he get lucky with a hot streak, or his individual point percentage? Was he carried by a good linemate or two? Or was the increased production a result of a maturing player?

One way to measure his luck is by looking at his shots per game, a stat that's tough to fudge and shows a strong correlation with offensive production. The table below shots Rajala's shots per game since turning pro:

"[Rajala] took more shots on goal than either Taylor Hall or Jordan Eberle."

This is incredible, and highly significant to our ranking and discussion. In each of his three seasons since leaving the WHL for Finland for his 19-year old season, Rajala has led his team in shots. That includes the 2012-13 Oklahoma City Barons where though their paths did not cross, he took more shots on goal than either Taylor Hall or Jordan Eberle. Rajala continued to pepper the goalie in the face of better competition in the AHL playoffs as well.

His shooting percentage has remained relatively stable as well. It seems the ability to generate offense underlies Rajala's game. Why, then, isn't Rajala considered the best player under 25 not already on the team?

The first strike against Rajala is stature. Rajala was listed at 5'10" 163 lbs on the Oklahoma City Barons website, and from viewings, he seems smaller than that. Though perspective is skewed in Candace's outstanding photo above, Rajala is small to the eye. At 163 lbs, Rajala would be one of the lightest players in the NHL.

The second and more concerning strike against Rajala is figure 1. 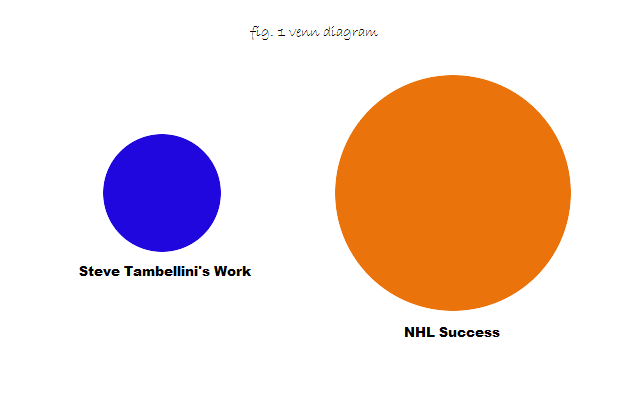 Rajala was drafted by the Steve Tambellini regime. As explained by figure 1, in his 4 years and 9 months as General Manager of the Edmonton Oilers, Steve Tambellini contributed nothing to the success of the NHL club. Rajala does have one advantage over others within the organization - until this season, he avoided being controlled by the Oilers during the developmental phase of his career.

The Oilers have an extremely interesting prospect in Toni Rajala. He's able to generate offense on his own but that's not all. Neal Livingston has called Rajala the Oilers' best prospect in the AHL and described him thusly:

...he’s dangerous when carrying the puck alone.
...has a creative gene. The prospects that stand out in the AHL, at least on the offensive side of the puck, tend to do things no one else does.
...[he] does swooping shootout moves
...slices sideways in front of the net
...he’s unafraid to shoot the puck
...[he] can skate at full throttle
...[he can] stop on a dime, and cut the other direction.
He’s fun to watch.
...he plays intelligent hockey for a rookie. Winger prospects usually are all over the map in terms of consistency. [he] isn’t going to playing mind-bending defense, but at least he’s steadily learned how to tone down the over-aggressiveness just enough to not leave his team hanging when the puck rushes the other direction.

That sounds like someone who can help the bottom six in the near future.