Steve Tambellini Was So Bad...

Steve Tambellini was handed the keys to an NHL team. He turned it into a pile of rubble.

Share All sharing options for: Steve Tambellini Was So Bad...

Steve Tambellini was hired as the Edmonton Oilers General Manager on July 31st, 2008, 31 days after Kevin Lowe madly tried to trade Dustin Penner, Andrew Cogliano and Ladislav Smid for Dany Heatley and 30 days after Lowe went crazy attempting to sign Marian Hossa for $81 million. This was a year after he tried to give Michael Nylander, 34 years old at the time, $22 million and signed Dustin Penner away from Anaheim as a restricted free agent via an offer sheet. Lowe clearly needed a break from the player acquisition demons that were tormenting him.

Enter Steve Tambellini, a decade-long Canucks company man that could never be mistaken for tormented. In fact he was often mistaken for conscious. Tambellini was not a guy to fly around the country, chasing players and throwing millions at other teams and free agents, in fact, his first two acquisitions were claiming Steve MacIntyre and Jesse Boulerice on waivers. The trademark of Tambellini's reign in Edmonton was losing trades, so when the Oilers announced (through whatever sports writer was hanging around Rexall Place) that they were interested in moving a player, it was a white-knuckle ride. To show the damage done during Tambellini's time as General Manager, I present to you a pair of simple, yet self-explanatory images.

First up is the lineup Steve Tambellini inherited when he began his job: 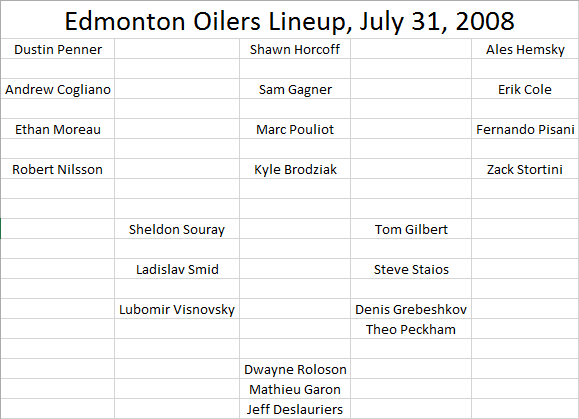 Next up is the lineup, minus draft picks, Steve Tambellini left behind after being fired and replaced by Craig MacTavish: 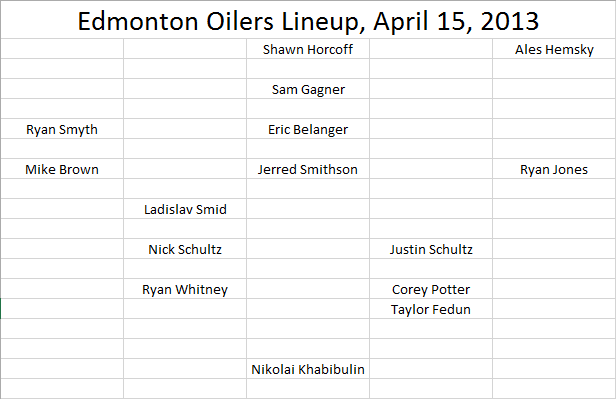 Ryan Smyth traded himself back to Edmonton and Sam Gagner recruited Justin Schultz. Other than that, five years later, Tambellini's moves were all on cement blocks in the neighbor's yard.

It's improbable, but not impossible for Craig MacTavish to be worse than Steve Tambellini.