Superstar or abject failure? Sorry, we seem to be all out of other options.

Some of you might feel that the writers at this site have an overly negative view of Jordan Eberle based on what's been published here over the last few weeks, but as you can see in the chart below, only one us hates the young man:

I kid, I kid. Derek has Eberle behind Sam Gagner, Taylor Hall, Ryan Nugent-Hopkins, Darnell Nurse, Justin Schultz, and Nail Yakupov. All six of those guys either are or project to be very good players. He doesn't hate him, but he has raised some concerns, and those concerns are worth addressing.

Since we've spoken about this several times, I think it's probably wise to go back to the beginning and set the context in order to avoid talking in circles. The discussion began (well... this time) when Zdeno's Cigar said the following:

As Lowetide would say, a King in the deck with a couple of Aces. I guess that makes Eberle a Queen.

The metaphor here isn't precise, but it's pretty clear that Eberle is being framed as a talented player a notch or two below the first overall picks. Derek didn't much like this characterization:

Derek then spent the next several posts describing Eberle as a passenger, which drew the ire of a large percentage of our commentariat, though it often seemed to me like folks were talking past one another and that the gap between Derek's position and the position of most others was smaller than one might suppose. So far as I know, everyone agrees that Taylor Hall is the superior player. The question is how much better.

One of the things that Derek has brought up several times is Eberle's possession statistics when playing without Taylor Hall. When he's playing with Hall, the pair can drive possession (they have a Corsi percentage of 51.7% at five-on-five over the last three seasons), but when they're separated, Eberle's numbers suffer more than Hall's (45.7% compared to 48.7%).

There are a few things that I'd like to point out here. The first is that they're better together. This is significant. The two players help each other to perform well.

There are a few things that I'd like to point out here. The first is that they're better together. This is significant. The two players help each other to perform well. It's a good thing for them and for the Oilers. That Hall sees a smaller drop when they're separated simply reinforces what we already know, namely that Hall is the superior player. In other words, Hall should be doing better when the two players are separated; that this happens doesn't make Eberle a poor player.

The second thing to consider is each player's linemates when they're separated. Over the last three seasons, Eberle played most often five-on-five with Ryan Smyth (12% of his ice time), Magnus Paajarvi (11%), Ryan Jones (8%), or Teemu Hartikainen (5%). Hall, on the other hand, played most often with Ales Hemsky (26%) or Dustin Penner (6%). I don't think anyone here will need to be convinced that Hall's group is vastly superior, and that this will account for at least some of the gap between Hall and Eberle when the two players are separated. Further supporting this conclusion is the performance of Ales Hemsky. In the past, we've been able to agree that Ales Hemsky has an established ability to drive possession, and over the last three seasons, his Corsi percentage with (50.8%) and without (46.4%) Hall is very similar to Eberle's.

The third thing to consider is that Taylor Hall is the team's Corsi leader, and is thus well-positioned to make Eberle's numbers look poor given the quality of the rest of the team when doing a WOWY analysis. When we look at the Corsi leaders and their top linemates on other teams over the last three-year period (2010-11 to 2012-13), we see that the situation is very similar to that of Hall and Eberle: the top players are generally more dominant in terms of possession alongside their most common forward linemate, and the pair generally suffers when separated: 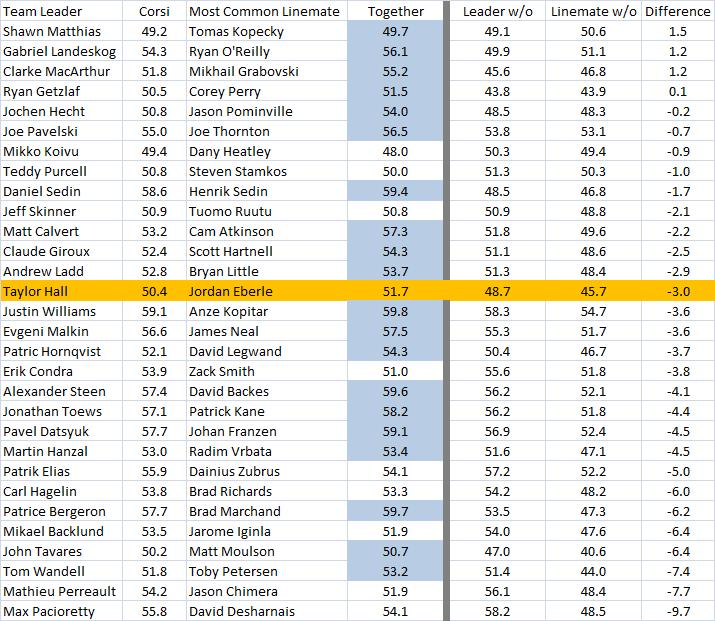 In 21 of 30 cases, the team's Corsi leader was better with his most common linemate, and in 26 of 30 cases, the most common linemate suffered more (or profited less in a couple of instances) when he was separated from the team's Corsi leader. This group of top linemates includes a wide variety of players, including very talented ones like David Backes, Patrick Kane, Anze Kopitar, and James Neal. In other words, Eberle's decline when away from his team's Corsi leader isn't unique among even very good players. And when you look at Eberle's five-on-five Corsi WOWY with all of Edmonton's forwards over the last three seasons, it becomes clear that Eberle can play a meaningful role in helping good players drive possession (players listed in order of ice time spent with Eberle):

With the exception of Hall, Eberle performs better than or equal to the forward he leaves behind, and Eberle helps his most frequent linemates perform better. It's not overwhemingly positive, but it points to Eberle being a legitimate top-line talent. Wherever the discussion goes from here (some will want to add the adjective "overpaid"), I think "legitimate top-line talent" is a wonderful place to start.