Anton Slepyshev and Bogdan Yakimov were drafted five picks apart by the Oilers this past June. On draft day, Yakimov got top billing by being selected ahead of his countryman, but on the C&B Top 25 Under 25, the tables have turned and Slepyshev sneaks in one spot ahead of Yak2.

While the two have draft position and nationality in common, they are two vastly different players. Scott did a fantastic job of profiling both players after the draft (Slepyshev here and Yakimov here), so, as Michael noted in his article on Yak2 at #19 yesterday, you probably won't learn anything from this article that you wouldn't have gotten from Scott's piece.

The odd item about Slepyshev is that he was rated as high as a 2nd round pick for the 2012 NHL draft only to fall all the way through the draft without being taken, most likely due to signability concerns. So what changed? Did his skill set become so compelling that the team couldn't pass him up this year? Not exactly.

In fact, his performance somewhat slipped this year, although that could be due to a tough first half after battling a collarbone injury.

To help in our evaluation, we're lucky enough to have the scouting report from Corey Pronman of Hockey Prospectus, who just recently profiled the Oilers' top 10 prospects outside the NHL, where he ranked Slepyshev 5th. Here is what Pronman had to say:

Year in Review: Slepyshev was just average to start the year, and he also suffered a nasty collarbone injury. He returned to play on the second line for Russia at the World Juniors, and he was better in the KHL when he was traded to Ufa. He was one of the only U19 players to be a KHL regular all year.

The Good: Slepyshev is a gifted all-around offensive forward. He is a good skater, as he displays great agility, edge work, and first few steps. He is a skilled puck handler, with the coordination to make above-average to plus plays with the puck. He also has a great shot and can score from mid-distance.

The Bad: Slepyshev's defensive game is below average, and he needs to continue to gain strength. His playmaking can be solid at times, but other times, he can be a little selfish.

Projection: He could be a second line winger.

There's a lot to like in that scouting report, although I'm sure fans will shudder at the negatives listed above. European players who lack a complete two-way game are among the most frequently targeted and maligned players in hockey. Right in Don Cherry's wheelhouse.

That said, for a player taken in the late third round as an overager, I think he's about as solid a prospect as you could hope for. Of course you could make the argument that it would have been worth a 6th rounder last year to scoop him up, but given this was MacTavish's first draft as GM, he can't be faulted for previous oversights. (To briefly point out the fact that this was, in fact, an oversight by the previous regime, here is Derek pointing out that the team could have been better served by using a late round pick on Slepyshev after the 2012 draft). With his second 3rd round choice this year, MacT got a highly skilled player with loads of potential, but whose game has some flaws in it. Overall, a player like Slepyshev has a much higher ceiling than previous 3rd rounders like Cam Abney Troy Hesketh and Travis Ewanyk. It remains to be seen if he'll reach that level, but the fact that the potential is there is a big step forward.

Slepyshev has another year on his KHL contract, so we should get a chance to monitor his development again this year before having to ask the question about his desire to come over to play in North America. Regardless of how it turns out, this player gets a pass on the Oiler Draft Choice Evaluation Flowchart (pictured below), and I think a guy with his skill level was worth the risk at the point in the draft where he was selected. 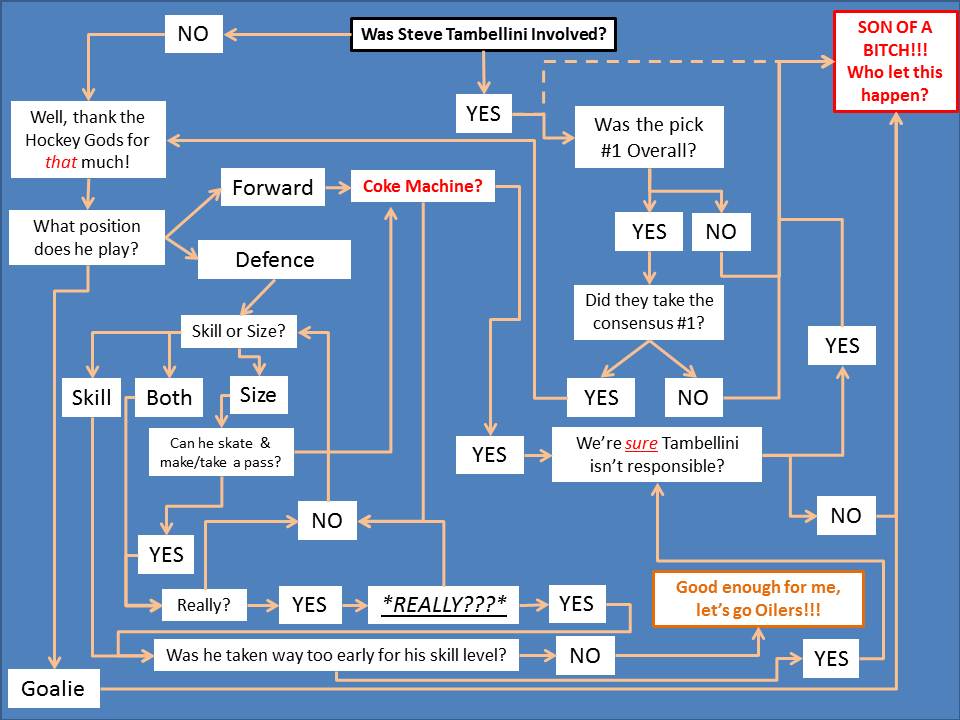