The Length of the Andrew Ference Contract

By the time Andrew Ference's contract with the Oilers expires he will be 38 years old; is there any chance the Oilers can get value out of a deal that long.

Share All sharing options for: The Length of the Andrew Ference Contract

There is some disagreement among Oilers fans when it comes to Andrew Ference and whether or not the team did the right thing signing him to a four-year contract worth $13M. Personally, I'm not a huge fan of the deal because I don't see a significant enough gap between Ference and Nick Schultz to justify the risk in both dollars and term that the Oilers have taken here. If Ference were a significant upgrade and pushed Schultz into a third pairing role this deal might make a little bit of sense, but I'm not sure that is the case.

That is, of course, a question about the immediate term value of the contract, and with this post I wanted to look at the tail end of the contract to see if there is a chance that the Oilers can get value out of a four year deal which seems a little long for a defenceman who is already 34, or if as Derek suggested, the Oilers will be buying him out in a couple seasons.

As a staring point, I determined the total number of seasons played (minimum 20 games played) by defencemen since 2000/01 based on the players age. For this I used hockey-reference.com so the age of the player is as of February 1 of the year in question. For Ference this means he was 33 during the most recent season. If this sounds familiar to you it's likely because James Mirtle did the same thing yesterday when looking at the David Clarkson abomination contract. I wasn't originally sure about going through this exercise, but when I saw that someone much smarter than myself had gone down a similar path I decided this might be worth a look. This is what the graph looks like. 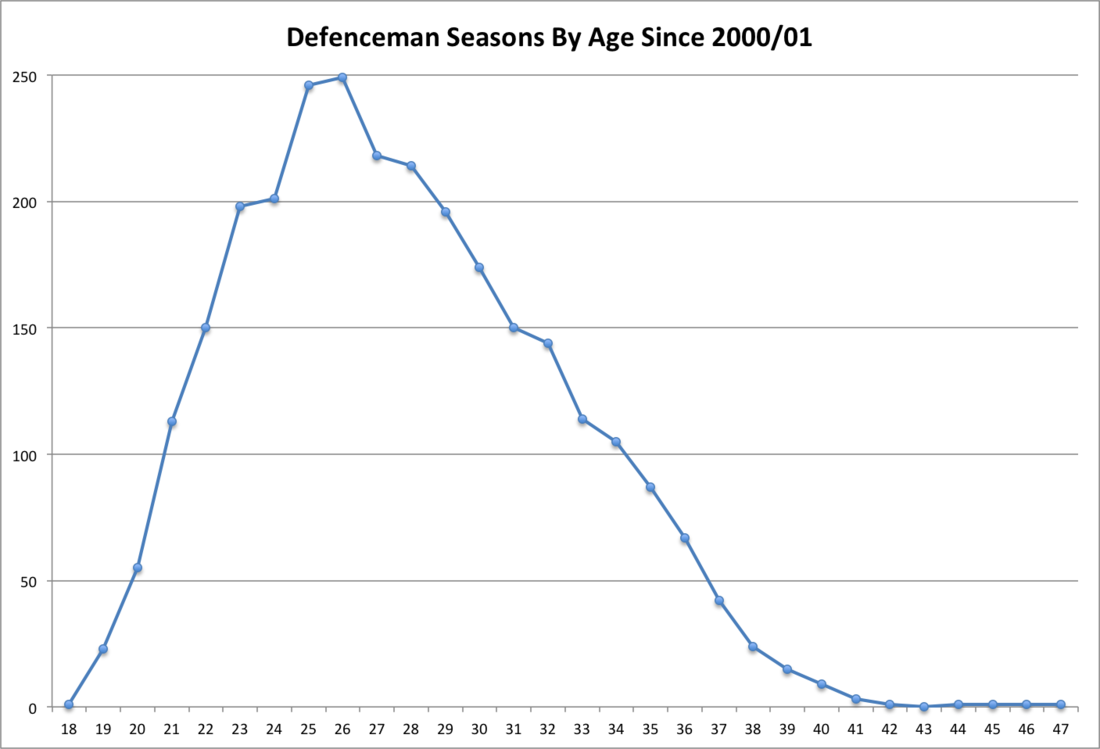 As you probably expected the graph shows that there aren't a lot of NHL defencemen in their mid to late 30s. This doesn't speak at all to the contributions of these players, just that there aren't many of them. In raw numbers I found 77 players who played in the NHL at 33; of those only 31 were still in the league four years later. Less than half - four-in-ten - were able to do what the Oilers are banking on Ference doing. Looking just at those numbers that seems like a bad bet to me.

If I was going to pick a defenceman who would be able to survive where so many others like him fail I would be looking for someone still playing top pairing minutes at 33. The players in that group , it seems to me, would be more able to lose a step or see their production fall off, and still continue to be an effective, or at least useful, player. Ference is obviously not in that group at this stage of his career. But maybe the Oilers know something I don't and a couple of comparable players will put things in a better light.

For comparables I looked for players who over their 32 and 33 year-old seasons averaged between 85% and 115% of Ference's 0.31 point per game average over the last two seasons. Any time you go through this process the criteria is important as it defines everything that comes after. In this case I thought about using ice time, but felt that playing on a team with someone like Zdeno Chara who is capable of playing half the game would sell Ference a little short, so I ultimately decided against using it as a criteria.

In total I found 12 players that fit the criteria. I would have preferred more, but given the attrition rate for NHL defenders I didn't feel it was possible to do much better without significantly expanding the criteria which in turn would reduce the usefulness of the comparison. Of the 12 players who matched the criteria only five would still be be in the NHL to play their 37 year old season. Interestingly the survival rate for this group was four-in-ten just like we saw for defencemen as a whole. These five players along with their points per game and time on ice averages are presented in the table below.

Again I don't think there is much here that should come as a surprise to anyone.Older defencemen play less and, as a result contribute less. What I found interesting was just how much less these players were playing at 37 compared to just four years earlier. As a group they averaged an almost 20% reduction in ice time. For Ference this would result in him played less than 16 minutes a night, a total that would have put him in Mark Fistric territory on the 2013 Oilers. Although, as I said above, his playing on a team with Chara may have reduced his ice time slightly over the last few seasons so the drop off might not be as pronounced. But a drop off should be expected.

It's a small sample of players, but the picture this paints is not an encouraging one. I think there is every reason to expect that the Oilers will be taking a cap hit of $3.25M for a 6/7 defenceman in just a couple of seasons. I can't see how that can be viewed as a positive. Especially if you line that up with when they might be taking their first real shot at the Stanley Cup. Perhaps if they'd front loaded the deal as suggested by speeds they would be able to trade Ference in the later years of this deal to a team looking for some help to reach the floor, but according to capgeek.com that isn't what they did. And to make things even worse they included a no movement clause in the contract which limits their options even more.

I would love to know what the Oilers were looking at when they decided to roll the dice on this deal. If this was a two year deal Ference could possibly live up to it, but at four years I think that is very unlikely. If I had to guess I would say that this is a deal that a lot of fans are going to dislike in just a couple years.