We've already got Hall & Ebs, why not Nail and Bogs?

Bogdan Yakimov. Just saying his name out loud makes you think it was built in a laboratory from the parts of lesser names. The Oilers are in the middle of a Russian renaissance, and part of their future belongs to a man whose name is two letters away from requiring the "of no relation" qualifier every time he's brought up in Edmonton. But while their names are similar, Yak2's style of play really couldn't be more different than his near-namesake, Yak1. 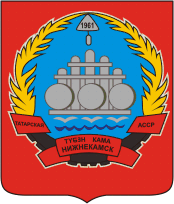 Interestingly, both players hail from the same hometown: Nizhnekamsk, Russia. I've embedded the coat of arms of their city to the left -- it looks like a concrete Atlantis! Are those seagulls holding the city in the air?? Neat!
Apparently the two players actually played together as young boys in a local hockey school run by Nail's father Rail (not making that name up).
That's interesting enough, but the Oilers haven't exactly been a haven for Russian players over the years. Here's a histogram of Russian players who've suited up for the Oilers ranked by franchise games played: 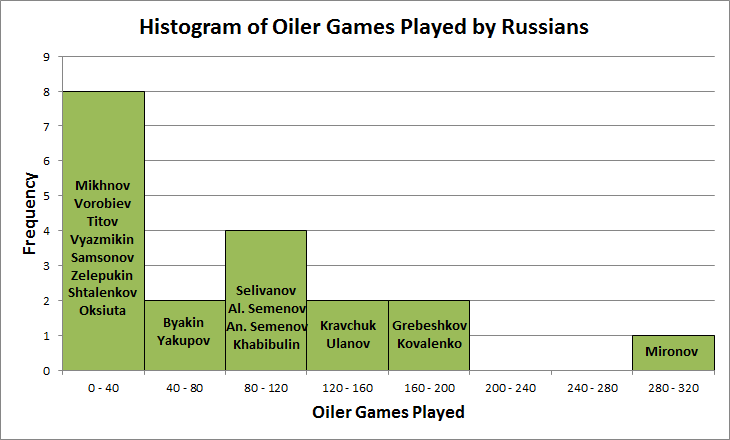 There have been 19 players of Russian (or USSR) nationality to play for the Oilers. Fully 10 of them played less than one season's worth of games with the team. Way out in front is a colourful character affectionately known as Bobo (Boris Mironov). Something that surprised me was Grebeshkov already being 2nd overall in team games played by a Russian, but he's got essentially two full seasons to play in order to catch up to Bobo Fett.

With Grebs back in the fold, along with newcomer Anton Belov and Yakupov, the Oilers are in the odd position of having multiple Russians on the team. Is there some kind of franchise maximum for the number of Russian players tolerable before space-time collapses? Let's have a look at a Gantt-type chart to show the timeline of Russian players through Oilers history: 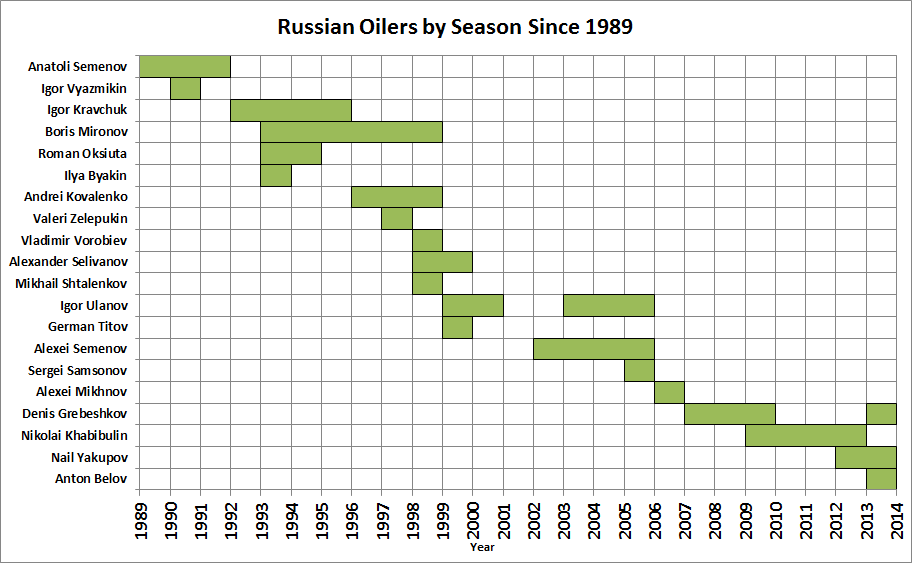 Here you can witness the evolution of Russian players in Edmonton since the time of Glasnost. You may be surprised to find out that the three Russians suiting up for the team this year is not a record for a concurrent number of players from that country. 1993-94 saw four Russians skate for the Oil, while the 1998-99 version of the team had FIVE Russians at the same time. My conclusion? Even though the Oilers have three Russians on the team right now, there is clearly room for some more. Bring on the Bogdan.

So what kind of player is he? I'm not going to be so uppity as to pretend I can do a better job of outlining this than Scott Reynolds did in July after his draft day, so I'd urge you to click on that link to check it out. My takeaway from that article was that he put up pretty good numbers in a newly-formed league where players his age are rather rare. In his draft-1 season in Russia's top junior league, he posted numbers that were (kind of) comparable to those of Grigorenko and Nichushkin. It's obvious that he's not just a humongous player. Which he is.

Here's a list of the tallest NHL forwards from Russia since the 2005 lockout, along with their career games played and career point production:

Bogdan is listed at 6'4" on Elite Prospects and 6'5" on HockeyDB and the Edmonton Oilers website. No matter how you slice it, a Russian forward of his size is a pretty rare breed for the NHL. He's listed at over 200 lbs as well, which shows he has been eating his Kremlin-controlled ration of gruel.

What's even better is that he's a big man who seems to have a lot of skill. Corey Pronman recently placed Bogdan at #9 on the Oilers list of top 10 prospects, ahead of players we've yet to see on our Top 25 Under 25 series. Here's what Corey had to say about him:

Year in Review: Yakimov was an above-average player in the KHL's minor league, but he was a last cut from the Russian World Junior team.

The Good: Yakimov is a huge, skilled center. He is a legit 6'5'', and he can protect the puck well with his frame. He will not blow anyone away with flash, but Yakimov has solid puck skills, and above-average hockey sense. He can make a lot of plays, he sees the ice well, and his decisions are quick. He is effective in the cycle game, and he wins battles.

The Bad: Yakimov's skating is his most notable concern. He is a sluggish, big man who needs work on his first few steps. He also needs to continue to gain strength.

Any Oiler fan worth his salt should have the phrase "huge, skilled center" tattooed on their own palms to remember the car wreck we've been through who had those tags (Bonsignore). But it's important to realize that this kind of potential came with a 3rd round pick, which in my opinion represents fairly good value. May I remind you that 4 years ago the Oilers were taking Troy Hesketh and Cam Abney in the 3rd round. Those were poor bets on players with low ceilings -- Bogdan is a fair bet on a player with a high ceiling.

I don't think there's any question that Russian players are now carrying a bias in the entry draft because of the KHL threat, which is causing their draft stock to fall. As they should -- as a drafting team your primary assumption is that all potential draftees have similarly high motivations to make and play in the NHL. With Russians, the equation has now changed -- players who very well could have played in the league are now staying home. It's really hard to blame clubs for passing on them -- what's the point in taking them if they immediately flatline in terms of career potential with your team?

But this situation does present opportunities, in terms of being able to exploit other teams' risk aversion. After all, a player with a 50% chance of having NHL talent with a 50% likelihood of coming over to play here still has a 25% chance of being a useful NHL player, for instance. Compare that with the much lower probability of pulling a useful non-Russian player out of the 3rd round, and you can see where the opportunity emerges. That the Oilers took two of these good Russian bets within a few selections of each other should give fans some heart that the team is being creative and not simply throwing their 3rd rounders away on half-digested animal remains. They're trying to pull in impact players. This is good.

And, hilariously enough, I've actually seen Bogdan play in person -- I attended the first session of the summer development camp a few weeks ago. I arrived without a player listing sheet, and had to peer over the shoulder of the person in front of me to confirm that the sauropod playing centre was indeed Yakimov. I'll just echo the comments from Pronman earlier. He has fantastic creativity with the puck.

His strongest drill was surely the one-on-one type challenges, where he would use his size, reach, quick hands, and shiftiness to send players looking for their own jocks. He didn't particularly excel at the skating drills, and seemed a step behind on line rushes. But it's that raw ability the Oilers are banking on, and hopefully some time in the KHL and dutiful work on his skating stride will bring that part of his game to at least a passable grade. I also noticed he was using one of those neon sticks that of course only a Russian would be using. I half-expected Pavel Bure to rollerblade into the rink with stone-washed cutoffs.

As Lowetide would say, this is a classic "draft and follow" type player. We'll learn a ton this year when he plays in the KHL, as we'll get to see what kind of role he earns in a top-tier league. After next year, I'll be interested to see if the Yakupov connection pays dividends in Russian players being more patient with the NHL process in order to make the club. Maybe players like Yakimov will be open to coming over and spending some time in the AHL to acclimatize to the North American game. It's hard to know, but it'll be fun to follow this kid's progress regardless.