Share All sharing options for: Marc-Olivier Roy - A Closer Look

We've talked quite a bit about Craig MacTavish's decision to trade out of the second round twice during the 2013 draft, and at this point I think we've come to agree that (1) MacTavish felt he was taking advantage of a market that overvalued second round picks and undervalued selections in the third and fourth round, and (2) MacTavish got less value for his second round picks than what has historically been available for trading down. If we can agree on those two things, we should be able to agree on one more: the fact that the Oilers took Marc-Olivier Roy 56th overall instead of trading down (again) suggests that the team really likes this player.

This is particularly interesting when you consider MacTavish's comments about Roy after the draft (emphasis mine):

Marc-Olivier I don't know all that well. I've never seen him play, but he really fit the criteria of a skill guy that has a chance to be an impact player.

So the team has fallen in love with a player that the General Manager has never seen play. That means the GM is relying on his amateur scouts and/or some kind of analytical formula to tell him that Roy has a chance to be an impact player at the NHL level. Roy did bring quite a bit of offense in the QMJHL this year, so I'm not immediately skeptical, but let's take a look at Roy's comparables to see if there are any impact players who had similar offensive numbers in the CHL.

In this case a comparable player was someone who was drafted in his first year of eligibility in 1983 or later, played his draft year in the CHL, had an adjusted goals per game rate (regular season and playoffs) between 0.39 and 0.48, an adjusted points per game rate between 0.96 and 1.17 (90% to 110% of Roy's production), and was selected somewhere between 41st and 71st overall.

None of these names are really jumping out at me here. Let's see how this group did in the NHL. 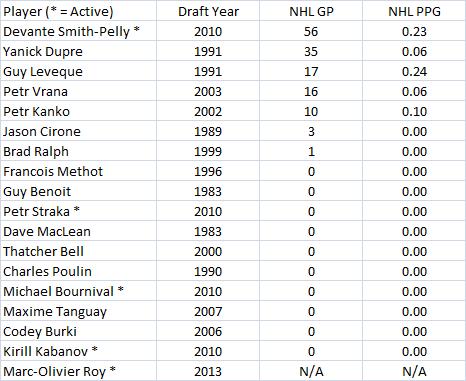 Well that's not good at all. Four of the seventeen comparable players are still prospects, but the other thirteen didn't become any kind of NHL player let alone an impact player. Roy is toward the top of the list in terms of his junior scoring, but he was also one of the oldest players when drafted. Overall, not a lot of reason for optimism.

Are the scouts saying anything that might get us excited? Corey Pronman had Roy ranked 70th, so he obviously saw some problems, but also offered some strong compliments about Roy's skating:

Roy's best skill is his skating, which is plus, as he can jet through the neutral zone with impressive top speed. He is a technically sound skater, and he is very elusive in tight.... Roy has roughly average size, and his physical game can be inconsistent. He will, at times, show fine on-ice effort, but there will be times where he can drift off to the perimeter, while not overly impressing.

Future Considerations liked him quite a bit more, presumably seeing more offensive potential, ranking him 43rd overall, but several parts of the scouting report are quite similar:

He skates very well both in terms of lateral agility and speed and explodes out of the gate with his first few steps and has a solid change of pace that keeps defenders on their toes.... Roy plays with a surprising physicality to his game where he finishes hits, often surprising bigger opponents, and is not afraid to get gritty for pucks or mix it up after whistles. He supports his defense well by consistently coming back into his zone and proving an outlet. The biggest problem with Roy’s game is his defensive willingness to pick up a check and his consistency level from shift to shift.

Overall, I'm not particularly optimistic about Roy's chances of getting to the NHL. The fact that none of the seventeen guys with a similar draft and scoring profile have become NHL players is, to some extent, just bad luck, but it's also indicative of the long road any second round pick faces. I was hopeful that the offense he showed might make him a better bet than most players taken at that point in the draft, but that doesn't seem to be the case.