Share All sharing options for: Aidan Muir - A Closer Look

The Oilers selected 17-year-old Aidan Muir with the 113th pick in the 2013 entry draft, which seems awfully high for a player who was cut by the Erie Otters in training camp and played the 2012-13 season in the Midwest Elite Hockey League. In the lead-up to the draft, International Scouting Services, Future Considerations, and Corey Pronman all agreed that there were at least 210 prospects better than Muir available, and in an interview with his local paper, Muir himself didn't seem sure about whether or not he was going to be drafted:

Everything has come together so fast. I don't really have the biggest expectations. I'm just glad to have all my family coming to visit. If I don't get drafted, I'll be cool with that.... In some ways, not getting drafted can be an advantage, because then you can negotiate to play where you want when your time comes.

As it turns out, the Oilers stepped up in the fourth round. So how did Muir go from being cut by the Otters in September to being drafted in June? As you might expect, he took a huge step forward this season. Muir said that being cut at the start of the season "worked out for the best" because he "would have been fourth liner there and wouldn't have developed". The extra year in Midget hockey certainly seems to have helped. In 2011-12, Muir finished sixth in points per game on his team at the U-16 level with 0.50; in 2012-13, he finished sixth in the league at the U-18 level with 1.08.

Those much better results were obvious early on, and Muir began to receive offers from the OHL and USHL to join a team mid-season, but he declined, deciding to stay with the coaches who "pushed [him] in the right direction and gave [him] the coaching [he] needed". Muir's season also got the attention of NCAA teams, and Muir committed to Western Michigan in February for the 2015-16 season. With that date still two years off, it became clear that Muir would be spending some time in the USHL, and the Indiana Ice made him the first overall pick in the USHL entry draft. When the last Central Scouting list arrived, Muir debuted as the 108th-ranked North American skater.

It's quite the story, but Muir is going to need to keep getting better at a torrid pace if he hopes to make it to the NHL. Muir was the only player from MWEHL to get drafted, but as was noted earlier, he didn't lead the league in scoring, and was a long way from the best offensive seasons that league his seen since it re-launched in 2008-09: 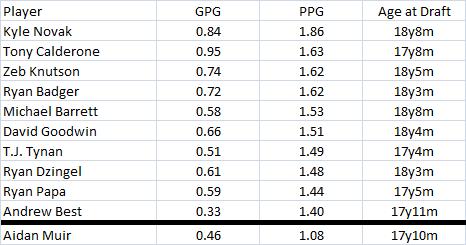 None of the players in that top ten were drafted in their first year of eligibility, though Ryan Dzingel and T.J. Tynan were taken in later drafts. Both Dzingel and Tynan are legitimate prospects now playing in the NCAA and do have some hope of one day playing in the NHL. If Muir wants to get even that far, he'll need to keep developing his skills while at the same time putting some more muscle on his 6'3'' frame.

The Oilers obviously feel that Muir has the potential to make the necessary improvements. I'm not going to say that he absolutely can't make it, but would consider Muir to have some of the longest odds to make the NHL among prospects currently in the organization.