Share All sharing options for: Devan Dubnyk - Replace or Re-Sign?

When Craig MacTavish took over as General Manager of the Edmonton Oilers, it was pretty clear that the team was going to need an upgrade between the pipes. Most fans figured that upgrade would come in the form of a more reliable back-up goaltender. After all, Devan Dubnyk was coming off his best NHL season ever -- it was also his first as the team's full-time starter -- and he was signed for the 2013-14 season, so the starting job looked set in stone.

As it turns out, that wasn't (and perhaps isn't) the case. First, Craig MacTavish attempted to trade for Jonathan Bernier; when that didn't work out, he made an attempt to acquire Cory Schneider at the draft. Dubnyk was left feeling understandably anxious as he waited to see whether or not one of the more sought-after young goaltenders in the league would be sharing his crease. In an interview with Jim Matheson shortly after the draft, Dubnyk offered the following comment:

My job is to try to stop pucks, but it was surprising and disappointing, but right now, not much has changed.

It's not surprising to hear something like that from Dubnyk. In fact, it's totally predictable. So why would MacTavish, knowing that there was some risk of alienating Dubnyk, pursue these other goalies? There's only one answer that seems reasonable to me: MacTavish isn't yet convinced that he's got a good starting goaltender in the fold.

On one level, that's clearly true. No matter what you think of Dubnyk, it's a fact that he's set to become an unrestricted free agent a little less than a year from now, and if the Oilers aren't prepared to sign him to a long-term extension before the start of the upcoming season, that leaves them awfully exposed at the position. In that light, MacTavish's pursuit of another talented young goaltender makes sense. Even if he decided to keep Dubnyk in the end, the added competition would provide MacTavish with a lot more leverage as he negotiates a new deal.

Things obviously haven't turned out that way. MacTavish ended up making the more predictable move, adding a strong back-up in Jason LaBarbera. But I think his original idea was a really good one, and left him in a better position to either re-sign or replace Dubnyk in the future. 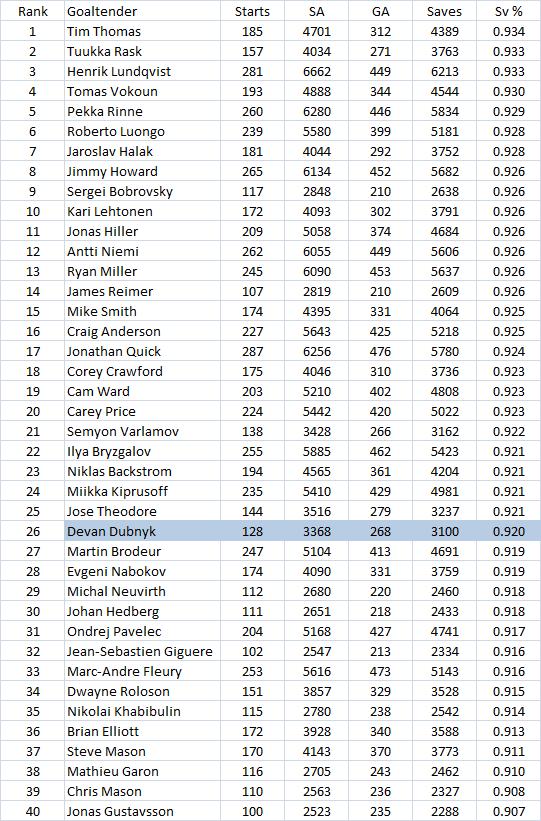 I think this chart is a good indication of why MacTavish might be feeling nervous and why he was looking at alternatives earlier this summer. Removing Dubnyk's rookie season moves him up to .923, a better number but still not among the league's top fifteen starters. With unrestricted free agency on the horizon, the Oilers probably shouldn't be confident enough in Dubnyk to pay him big money on a long-term contract, and yet that's likely what it's going to cost to get him signed before the summer ends. If the Oilers wait a year and Dubnyk plays well, they risk watching Dubnyk leave for nothing, or paying through the nose to keep him around.

It's a tough situation, and I think MacTavish deserves some credit for trying to give himself some wiggle room. Unfortunately, he didn't succeed. So what should the Oilers do now? Let's say Dubnyk's agent is looking for $5M per season for five years to sign an extension today. Would you do it?