Earlier today the Edmonton Oilers announced that forward David Perron has been acquired from the St. Louis Blues with forward Magnus Paajarvi and a second round pick in 2014 going the other way.

Magnus Paajarvi was a restricted free agent this summer after having completed his entry-level contract, which means that he's four years away from unrestricted free agency. After scoring 34 points in 80 games as a 19-year-old rookie, Paajarvi has struggled offensively. He scored just 24 points in 83 games over the next two seasons in addition to spending significant time in Oklahoma City where he scored 56 points in 86 games over parts of two seasons. When I looked at what comparable players earned in their second contracts, it seemed likely that Paajarvi would end up with a two-year deal for something in the range of $1.2M to $1.5M per season, making him a relatively inexpensive middle six forward.

David Perron is three years older than Paajarvi, but he still has three years remaining on a contract signed in July of 2012 at a cap hit of $3,812,500 per season. His track record at the NHL level is much stronger with a career goals per game rate of 0.25 and career points per game rate of 0.58 in 340 regular season games. The biggest fly in the ointment is that Perron missed 96 games at the end of 2010-11 and start of 2011-12 because of post-concussion syndrome. After returning to the lineup in 2011-12, Perron scored 42 points in 57 regular season games and was subsequently signed to his new contract extension. That new contract is very encouraging because it indicates that the Blues were comfortable with his health. He followed that by playing in all of St. Louis's 48 games in 2013, scoring at close to his career average. Since returning from the concussion, Perron has been one of St. Louis's most impactful forwards: 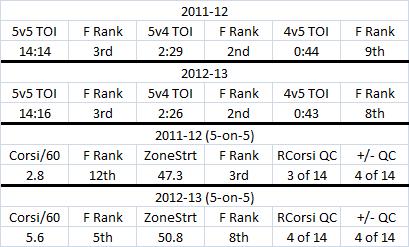 The time on ice totals show that Perron has been a top-six forward on one of the league's better teams, playing big minutes at both even strength and on the power play. That's mostly good, but it also means that if the Oilers expect Perron to produce at previous levels, he'll need to be given similar opportunities in Edmonton. That said, if Perron plays on one of the top two lines in Edmonton, it's likely that he'll be playing with more dynamic offensive players than he was with the Blues. In an interview with Bob Stauffer, Craig MacTavish mentioned an ability to kill penalties, but his role in that area over the last couple of seasons has actually been very small.

In terms of the possession data (Corsi/60 is Perron's shot attempt differential per 60 minutes of 5-on-5 ice time), Perron looks solid. He doesn't need shelter in order to keep the puck moving the right way (ZoneStrt is the percentage of end-zone faceoffs Perron had in the offensive zone), and he has generally been part of a forward unit that has outplayed top six opposition.

As for Perron's place in the team's structure longer term, he has played mostly on left wing despite being a right-handed shot, which makes him an ideal fit for the Oilers who are much stronger on the right side. The $3,812,500 cap hit should be very manageable for the team over the next three seasons even if the club decides to add another major component in the $4.5M range on defense (which they should definitely be trying to do). Given Perron's superior performance, the fact that he should be cost effective over the next three seasons, and the fact that his presence will likely prevent Edmonton from making a huge blunder in free agency to "fill out the top six" over the next several off-seasons, my first impression is that, even though I quite liked Magnus Paajarvi, this is an excellent trade by Craig MacTavish if the team is willing to spend to the cap ceiling.