Share All sharing options for: Anton Slepyshev - A Closer Look

Anton Slepyshev was one of Edmonton's more interesting selections in the 2013 entry draft simply because he was selected 88th overall after being passed over completely in 2012. That's the kind of thing that happens when a player is an unknown quantity in his draft year and then has a break-out season, but that wasn't the case with Slepyshev who was ranked 38th overall in the final NHL Numbers Consensus Rankings before the 2012 draft. Every other player ranked inside the top 50 on that list was selected inside the top 100 with the exception of Andreas Athanasiou who was taken 110th overall, and just five other players ranked inside the top 100 went unselected (Dane Fox, Emil Lundberg, Vyacheslav Osnovin, Dominik Volek, and A.J. Michaelson), none of whom were drafted in 2013.

So Slepyshev's situation is a bit odd. He was a known quantity that no one wanted in 2012 only to become the 88th selection the following year. It's especially odd because Slepyshev didn't really perform all that well in 2013. In 2012 he captained Russia to a 5th place finish in the U-18 World Championships, and led his team in scoring with seven points in six games. In 2013 he made the U-20 team, but played a lesser role and had just one assist in seven games. In 2012 he scored seven points in thirty-nine KHL games, which doesn't sound impressive, but is actually one of the better seasons by a draft-eligible player since the KHL came into existence in 2008-09.

In 2013, he improved on that output marginally, but was caught by several of his peers. 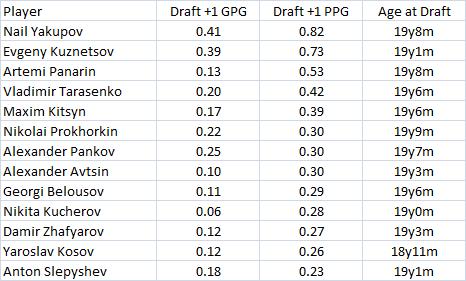 To my eye, Slepyshev looks far less impressive in 2012-13 than he did in 2011-12, and yet the Oilers drafted him this year. I can think of two possible reasons for the change of heart. The first is the perceived likelihood of Slepyshev coming to North America. The fact that he wasn't selected in 2012 suggests that teams felt he wasn't likely to come over. The Oilers, it seems, now feel differently. The other possible change is Edmonton's stated emphasis on skill in the draft. Whereas in the past they might have passed on a player from the KHL because he might not come to North America, they're now more willing to take a risk in order to select the player with the best chance of becoming a significant contributor at the NHL level.

So how good are Slepyshev's chances? Thankfully, the KHL keeps more detailed statistics than some leagues, and so we can look at that last chart again, but this time add in time on ice per game and shots on goal per game to get a sense of how involved Slepyshev is on his team compared to some of the other prospects.

The extra data is a mix of both encouraging and discouraging. On the one hand, the fact that the lag in offense can't be attributed to a lack of ice time is a bit discouraging. On the other hand, the fact that he played 12:04 per game suggests that he'll likely continue to get the ice time he needs to develop his game in Russia, which is important because he's already got a contract to play there in 2013-14 and may stay even longer. The shots per game totals are decent, which is good, but well short of the totals amassed by Kuznetsov, Yakupov, and Tarasenko, the only three players on the list who look like they'll have significant NHL careers.

The numbers leave me feeling like Slepyshev has some catching up to do if he hopes to make it as an impact player in the NHL, but that's probably to be expected at this point in the draft. And even if Slepyshev is something of a long shot, I'm still pleased that the Oilers picked him because it's the kind of selection that's indicative of a shift in draft strategy towards selecting players who, if everything breaks right, could be real difference-makers.