The Oilers Without Hemsky and Horcoff

With Craig MacTavish's revelation yesterday that he is admittedly trying to move Shawn Horcoff and Ales Hemsky before the start of next season, how does their departure affect the team's needs this summer?

Share All sharing options for: The Oilers Without Hemsky and Horcoff

In his piece this morning, Scott Reynolds (whose "Comparables" series on draft eligible players is is simply fantastic) offered his take on Craig MacTavish's comments yesterday in his interview on the Mark Spector Show. I won't re-quote the text here as Scott already did so this morning, but I'll briefly re-iterate that MacT was very candid in his belief that it is in the best interests of both the team and each of the two players if everyone moves on.

Other than briefly wanting to express my extreme happiness that the Oilers finally have a GM who can articulate his plan clearly and who appears decisive and ready for the task at hand, I want to take the next step in analyzing these comments by looking at how the expected departure of these two long-time Oilers affects the team's off-season shopping list.

From previous statements, it is already apparent that the team is going to attempt to shed a lot of excess baggage this off-season and will re-make the team around the established core of Taylor Hall, Jordan Eberle, Ryan Nugent-Hopkins, Nail Yakupov and Justin Schultz. (Plus potential long-term pieces Magnus Paajarvi, Sam Gagner, Jeff Petry, Ladislav Smid, Oscar Klefbom and Devan Dubnyk).

For long-time Oiler fans who have become exasperated by the team's ineptitude and lack of depth beyond the Young Gunz, the list of likely outgoing players should read like a laundry list of condemnations of Steve Tambellini's tenure in Edmonton. With the exception of Horcoff and Hemsky, who are both still useful players on a team in the right role, others expected not to return include:

Including #10 and #83, that's 18 names out of a possible 50 contracts that MacTavish is likely to attempt to turn over in a single off-season, or almost 40% of the entire pro-level organizational roster. That's a huge amount of change for one season. I have absolutely no problem with this as the only useful pieces in that list are Horcoff, Hemsky and Yan Danis as a depth goaltender (who could possibly return, though it sounds unlikely). Talk about clearing the dead wood!

So, what does this mean for the team's shopping list this summer? Below I have provided a table with the players who at this point are considered likely to return (barring any large trades, which could open the floor to anyone departing, even one of the past #1 overall picks.) Players under contract are left in white, while RFA players are highlighted Yellow and open roster spots are highlighted in Red. 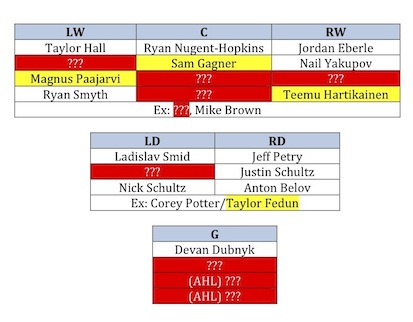 The team's top six forwards are close to set, and could be entirely locked in if the team decides to start Paajarvi alongside Gagner and Yakupov next season. That trio had some nice auditions together down the stretch this year, but I suspect they will try to bring in a secondary scoring winger and move MPS down a peg, which isn't the worst decision in the world provided they acquire the right player to slot in ahead of him. The other option here is to move Sam Gagner over to the wing and bring in a #2C. Gagner has struggled greatly in the face-off circle and could potentially serve as a solid option on the wing, which may involve flipping Nail Yakupov back to the left side where he started his rookie season. The biggest down side to this scenario is that it opens yet another hole down the middle, where the team already has significant needs.

The third line is now a gaping hole in the line-up. Horcoff and Hemsky being moved out blows a massive hole in the team's bottom six and leaves a glaring lack of players who can be counted on to play difficult zone starts and/or tough minutes against the opposition's top players. The top line proved capable of coming out on the positive end in tough minute situations this year, but its fairly obvious they will be counted on to produce offensively and therefore will likely receive at least 50% offensive zone starts. Gagner and Yakupov have both shown some indicators that they may eventually be able to drive possession (though certainly not this past season for Gagner) but counting on them in this regard heading into next season is certainly not something I am expecting from the new Oilers' GM. Their line will need some mild protection, which will need to come from Paajarvi and his linemates. As a result, the team will need a tough minutes centre and right winger to address the departure of their current Captain and the Pardubice Prince.

The fourth line, which has been a massive source of frustration and ineptitude in the past is shaping up quite well heading into the summer with veteran Ryan Smyth heading into what will likely be his final season in Edmonton on the left side and Temmu Hartikainen, who has done everything he can at the AHL level to prove he deserves a full season with the Oilers (and who will be waiver eligible) slotted on the right side. The need here, and it is not insignificant, is an effective 4th line centre who can contribute to a cycle game which is set up well with Smyth and Hartikainen on the wings. A player fitting this mold will help the Oilers balance the possession equation a little better than in the past. Perhaps more importantly, the team needs somebody who can contribute to winning face-offs and killing penalties. Shawn Horcoff carried an awfully heavy load in Edmonton the last few seasons and if he is not back, they may need to share those responsibilities among a wider group of players this coming season. An effective 4th line centre can go a log way to easing the burden carried by others on the team.

Before moving on to the defence corps, the team should also be targeting someone to play the 13th forward role. With names like Eager, Petrell and Hordichuk out of the mix it seems, Mike Brown is left to be the designated muscle to join the line-up when the coach feels it is needed. With Nugent-Hopkins' status for opening night up in the air following his shoulder surgery, I would recommend they add a depth centre who can step in and contribute and allow them to leave Marc Arcobello and Anton Lander in the AHL to continue their development.

On the blueline, the team needed to add two, if not three players to the mix and purge a lot of players who could not contribute. Of the large group of 6/7/8 defenders, only Corey Potter is back, and if he is considered the #7 guy on the depth chart this year, then I think there is a place for him...at least until the team's emerging prospects pass him by. Taylor Fedun may give him a run for his money to make the club in September. The Oilers have three bona fide top 4 blueliners (if you are willing to acknowledge that Justin Schultz will be treated as such going forward). Schultz, Petry and Smid form a pretty solid middle line-up. I would rather they were considered the 3,4,5 group than the 2, 3, 4 group as I think the team is still asking too much of Schultz at this stage in his career, but I believe that ship has sailed to some degree.

The recent signing of Anton Belov adds a bit of a wild card as well as some potential to the mix. Given that MacTavish has stated outright that he expects Belov to be on the team opening night, and he has yet to play in North American pro hockey, I think slotting him in a third paring with Nick Schultz is about the right call. Schultz is someone who could be included in trade discussions, but if he is back, he is certainly still a more than serviceable (though overpaid for the role) third pairing blueliner. This leaves one spot in the top four for an off-season acquisition. Personally, I would still rather see two more additions, but the influx of Belov and a top 4D plus the impending arrival of Oscar Klefbom who MacT seems to believe will be contributing at the NHL level before the end of next season andthe continued development of Martin Marincin and Taylor Fedun (not to mention the host of prospects soon to follow behind them) provides enough depth that the team should be competitive with just one more significant add on the back-end.

In goal, the team appears to be reasonably set in the number one slot as Craig MacTavish has spoken multiple times that he feels this coming season will be Devan Dubnyk's chance to cement himself as a #1 NHL goaltender. MacTavish's endorsement of Dubnyk is not as strong as I expected, but he certainly gave no indication that the game plan moving forward did not involve their current starter.

Once the organization gets beyond #1 on the goaltending depth chart, there's a grand canyon sized hole to be filled. The Khabibulin experiment has mercifully ended and the team has stated publicly that the plan is to move on. We should expect to see a goaltender brought in who is not just accepting of a back-up role, but one that will challenge Dubnyk for playing time and try to force him to be at his best. I don't personally expect Yan Danis to be back as I believe based on his comments that MacTavish wants a third viable NHL option as his top guy in Oklahoma City and I don't think he feels that Danis meets that criteria. Time will tell if I'm right in that assessment. With Niko Hoivinen's contract also up, the team is likely to have a completely new tandem to play in Oklahoma City next year.

In the same Mark Spector interview noted above, MacTavish referred to Olivier Roy and Tyler Bunz as the team's "East Coast goalies" which suggests that they may begin the season together in Stockton in the fall. I think that is the right call. The lone remaining member of the organization playing pro hockey is Frans Tuohimaa, but a decision has not been clarfiied publicly about whether he will play next season in North America (as an AHL back-up?) or stay in Europe to continue his development.

I won't delve into coaching in this discussion, but it appears obvious from the team being linked to Dallas Eakins and Paul Maurice in recent days that there is a plan to add some depth to the coaching roster as well.

That's a heck of a list. If Craig MacTavish can cross off everything above before October, the Oilers will be a vastly improved hockey club next season. If last off-season was called the "Summer of Steve" in reference to former GM Tambellini, then this one could be the "Summer of Change".
For most Oiler fans, I imagine that would be a good thing.

I'll return after the weekend with a look at some of the potential players for the Oilers to add to address these needs and how they would need to be acquired. Please feel free to suggest any off-season targets in the comments section and I'll look into any that are viable.