In the consensus rankings, there's a pretty clear line between the top seven players and everybody else, but that doesn't mean every single scout is in agreement about the gaps in talent. The man ranked eighth in those consensus rankings, Darnell Nurse, is one of the few players who could sneak past one or more of the top seven at the draft. Even among the sources used for the consensus rankings, there's some disagreement: Future Considerations has Nurse ahead of Sean Monahan, Craig Button has him ahead of Elias Lindholm, and International Scouting Services has him ahead of both Monahan and Lindholm. Other sources, meanwhile, have him outside of the top ten entirely. So where does he really belong?

Let's begin our search for an answer by looking at some comparables to better understand what Nurse's potential might be in the NHL. In this case, a comparable player was someone who played his draft year in the CHL, had an adjusted points per game rate between 0.56 and 0.69 (90% to 110% of Nurse's offensive production), and was selected somewhere between 3rd and 13th overall. A player with similar goal-scoring is highlighted in blue.

This is a solid list, no doubt, but it's not a wildly exciting list. The best player in the group is probably *spits* Derian Hatcher, and there are some physical and stylistic similarities between Hatcher and Nurse. Like Hatcher, Nurse claims physical strength and stature as a major plus, and like Hatcher, Nurse is known more for his work in the defensive zone than he is for his work in the offensive zone. Unlike Hatcher, Nurse is considered a good skater and has strong mobility, things that will likely help him to be as effective as Hatcher was in a different, clutchier, grabbier era.

But Hatcher didn't have an elite all-around game, and judging from these comparables, Nurse probably won't either. In the chart below, I've listed each player's number of regular season games, his time on ice per game (if the NHL was recording TOI for more than half of the games he played), his points per game, and the first season he played in at least forty games. 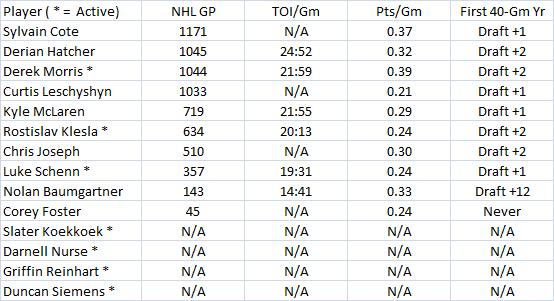 The offensive numbers are consistently adequate, but never great. That jives well with the various scouting reports, which say that he "makes great outlet passes" (The Scouting Report) but also say that he "won't be a dynamic offensive threat" (Corey Pronman). In other words, he's not a game-changer. He is, however, a pretty safe pick. If you'll permit a generous assumption with regard to Luke Schenn, eight of the ten players listed have had lengthy careers spent partially (mostly) as top four defenders, and all eight made it to the NHL quite quickly. That doesn't speak to the effectiveness of their minutes as rookies, but with teams wanting to maximize the value of their entry-level contracts before free agency, knowing that similar players didn't need a long apprenticeship in the minor leagues is a definite plus.

So does Darnell Nurse belong ahead of any of the top seven? I don't think so. Should he be pushed out of the top ten? That's one of the big questions I'll begin to answer when this series continues next week.

Next up Monday morning: Hunter Shinkaruk