Sean Monahan played for a horrendous team. It's the kind of thing that you know matters, but you don't really know how it matters. Did Monahan benefit from getting way more ice time than he might get otherwise? Did he benefit from the fact that everyone on the team knew that offense would usually run through Monahan? Was he negatively impacted by the fact that opposing teams could focus on him alone or by the fact that he didn't have really talented linemates to work with?

I won't try to answer those specific questions, but in order to get some idea of how playing for an awful team might impact a player, I decided to look for other players drafted with one of the first thirty picks over the last thirty entry drafts who also played for a team with a points percentage of 30% or worse. Perhaps unsurprisingly, there aren't very many, and even fewer who were drafted in the top ten. The chart below includes all of them, along with their adjusted points per game in their draft year, number of NHL regular season games, and unadjusted NHL points per game:

By eye, this list looks like it has way too many busts, but my study on finding top players at various points in the draft (which is admittedly a bit out of date and doesn't include all of the seasons we're looking at here), suggests that we should expect to see two strong offensive players come out of the group (excluding Monahan and Scheifele), and that's pretty much what we get with Scott Gomez and Daniel Marois both qualifying. The group doesn't have a single long-term role player, so that will definitely make this group below average overall, but not frighteningly so for a team interested in Monahan, at least in part because his offense is safely clear of everyone else in the group. 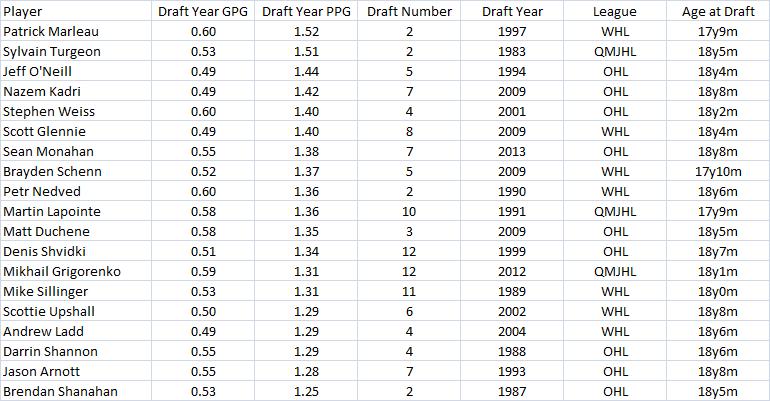 It's a much bigger group than what we saw for MacKinnon or Drouin, which speaks to the fact that those two are more uniquely talented players. Along with that, we don't see the same superstar talent that those previous lists included. Some of that is just bad luck (there are superstars with much worse junior numbers than this, and someone will eventually put together a draft season like this one before turning into a superstar), but it's also a reflection of the fact that Monahan can't reasonably be expected to become a true superstar in the NHL.

That said, it's also a pretty safe list of top nine forwards with some top line upside. There are a couple of busts in the group (Scott Glennie, Denis Shvidki), but guys like Brendan Shanahan and Patrick Marleau really help to balance that out. Monahan strikes me as a safe pick, and I could see him going ahead of some of the folks I've already profiled, but the lack of superstar potential has him behind them on my list.

Next up tomorrow afternoon: Darnell Nurse