In the last edition of the consensus rankings, Elias Lindholm was ranked sixth, but in this case, there didn't look to be a lot of upward mobility. Of the eight sources used for the consensus list (Bob McKenzie, Future Considerations, ISS, Ryan Kennedy, Craig Button, Corey Pronman, and The Scouting Report), The Scouting Report is the only one with Lindholm ranked higher than sixth overall, placing him fifth. This comes as a bit of a shock to me because Lindholm had a truly amazing season in the Swedish Elite League.

Let's look at Lindholm's comparables. In this case, a comparable player was someone who played his draft year in the SEL, had a goals per game rate between 0.21 and 0.25 a points per game rate between 0.57 and 0.69 (90% to 110% of Lindholm's production), and was selected with one of the draft's first eleven selections. Since I couldn't find anyone that matched all of these criteria, I've listed all of the players who were drafted out of the SEL during the last thirty years with one of the first thirty picks in the draft, and highlighted the players who are closest to being a match, barely missing on just one criterion: 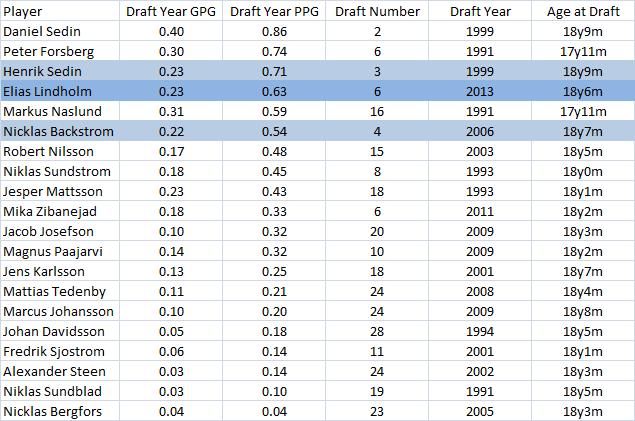 Those are two pretty good comparables, and interestingly, Lindholm is actually the youngest of those three players. To me, everything looks good! He played 16:17 per game this season, which made him one of Brynas's top forwards, but it's not like he was being run into the ground and piling up points because of it. It also sounds like he'll be a player that can be counted on in all areas of the ice -- Corey Pronman's scouting report notes that Lindholm is gifted both offensively and defensively, and that he's a player willing to engage in battles for the puck with the ability to win it frequently.

So what are the concerns? Lindholm might be nicked because he played mostly on the wing in Sweden this year, taking just 67 faceoffs (and winning 58%). Taking into consideration that centers are generally more impactful than wingers, that might function as a tiebreaker between Lindholm and Barkov. Pronman notes size and strength as his primary concerns, and this seems like the big one to me. To be honest, I don't think it's a big issue. 6'0'' and 190 lbs. certainly isn't small for a player of that age, and the fact that he's been effective against men in one of the best leagues in the world would also seem to be an important mitigating factor. It seems like Lindholm is suffering when compared to some of the other players available around him (Barkov, Nichushkin, even Monahan).

Now, when I was writing about Barkov, I discussed the increasing gap between the SM-Liiga (and European leagues in general) and the NHL; the Swedish Elite League is in the same boat. There are a lot of possible reasons for this, but my working hypothesis is that the two biggest reasons are the rise of the United States as a developmental country and the lack of NHL expansion providing the top North American league with a lot of stability (the last season with less than thirty teams was 1999-00). That doesn't mean that what Barkov and Lindholm are doing is unimpressive, just that their offense may not translate quite as well as it has for players who have come from those leagues in the past.

Next up tomorrow afternoon: Darnell Nurse