I wrote about Jonathan Drouin earlier today in a post that had Nathan MacKinnon in the title role, but that kind of cross-pollination certainly isn't anything new for these two. Drouin and MacKinnon started the year as teammates in Halifax, played together in the World Junior Championships, and then dueled each other at the top of the draft rankings while helping Halifax to the Memorial Cup. But is the fact that these two players played so much together a concern? Fortunately (or unfortunately if small samples make you want to pull your hair out), from 1983 through 2010 there have been eight occasions when CHL forward teammates have both been chosen in the top ten: 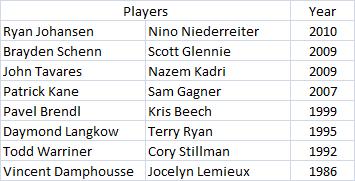 There are some rather obvious disappointments in the group, but that would probably be true with any random sampling of sixteen top-ten picks. The real question is whether or not this group's offense translates less well to the NHL in some kind of systematic way. With such a small sample, the pattern would need to be pretty consistent in order to hold much value, but let's take a look anyway. One way to examine the question is by comparing what percentage of CHL offense translates into NHL offense for top-ten picks in general to the percentage that translates for the sixteen players in the chart above.

If we look at the drafts from 1983 to 2010, there are 123 players in total (excluding Brett Connolly and Brett Lindros who barely played in their draft year). After considering any player who played in less than 50 career NHL games to have a career PPG of zero, the median percentage of offense that translated (unadjusted draft year PPG in the CHL to unadjusted career PPG in the NHL) among those 123 players was 34.9%. Here's how our group of sixteen compares: 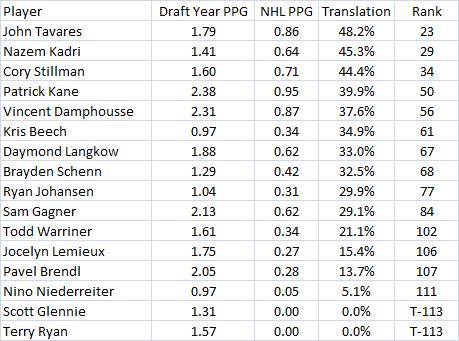 So that's a clear majority below the median and no one inside the top twenty. And yet... there are some fantastic players in the group, and some younger players like Schenn, Johansen, and Niederreiter who could easily push their way up this chart. To me it's suggestive, but far from conclusive. It would be the kind of thing that might scare me off Drouin if he was scoring at a slower pace. As it turns out, even if Drouin is only able to bring 30% of his offense to the NHL, that still works out to 0.64 points per game over his career. That would clearly be disappointing for a player chosen with one of the first three picks, but it's still pretty useful.

And the best case scenario? Let's look at Drouin's comparables. In this case, a comparable player was someone who played his draft year in the CHL, had an adjusted goals per game rate between 0.71 and 0.87 and adjusted points per game rate between 1.89 and 2.31 (90% to 110% of Drouin's production), and was selected with one of the draft's first eight selections. These were the results:

Not many players score like Drouin, and those who did tended to become stars. Any team drafting Drouin would no doubt be thrilled to see that trend continue.

Next up tomorrow morning: Aleksander Barkov