Nathan MacKinnon is currently second overall in the Consensus Rankings, but as I mentioned yesterday, there are several scouts who think he should go first. I'll state up front that, based on the information I have now, I've got MacKinnon on top myself.

I don't find this lack of improvement at all troubling. When I looked at this question a couple of years ago, I discovered that players who don't show a lot of improvement year-over-year tend to have their results translate to the NHL on a more predictable trajectory. With MacKinnon posting consistently elite results, predictable sounds just fine! In fact, that consistency is one of the main reasons that I've got MacKinnon ahead of his teammate, Jonathan Drouin.

Note: Big thanks to the QMJHL for actually tracking shots. It sure would be great if the other junior leagues followed suit!

There are a lot of fantastic players in that group, and a couple of duds in the form of Derick Brassard and Daymond Langkow. Now, those two players are the oldest in the group and are also the only two drafted lower than 3rd overall, so it's not like it's a huge concern, but even if those things weren't true, MacKinnon's 16-year-old season again provides reason for hope since neither of those guys had the kind of Draft -1 season that MacKinnon had (totals are once again adjusted for era): 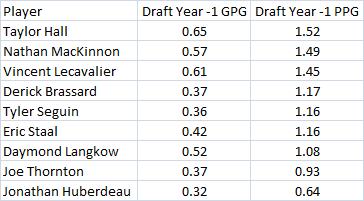 MacKinnon's best comparables from this group are clearly Taylor Hall and Vincent Lecavalier, both very deserving first overall picks themselves. I can understand that some teams might not have MacKinnon at the top of their list, but to me, he represents the best mix of safety and elite talent of any of the players in the discussion.

Next up this afternoon: Jonathan Drouin