In the last rendition of Derek's Consensus Rankings, Seth Jones is occupying the top spot. For a long while it seemed that his place at the top was nearly assured, but that no longer seems to be the case. When Corey Pronman released his list of the top 100 prospects for this year's draft, he had Jones below Jonathan Drouin and Nathan MacKinnon. After the Halifax teammates led their team to the Memorial Cup, Bob McKenzie opined that the top three players were all very close and that some scouts were shifting to MacKinnon. This apparently included some of the folks scouting for International Scouting Services who also dropped Jones into second place.

So are there concerns with Jones? The main concern relates to his position. Pronman identified the fact that defensemen tend to be less impactful (to use a MacT-ism) than top forwards early on in their careers, something that needs to be a major consideration for teams thinking of taking Jones first overall. Defensemen also tend to be more difficult to project, which can lead to teams making mistakes. That doesn't mean picking the defenseman is always the wrong move, but a quick look back at the last thirty drafts where a forward and a defenseman were both taken in the first three picks shows that the forward is usually the better pick: 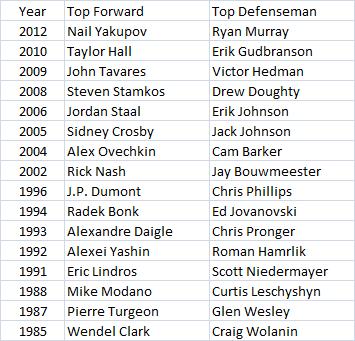 It's just a snapshot, but it's enough to demonstrate that the top forwards would need to be pretty poor -- and Jones's ceiling pretty high -- in order for Jones to make sense as a strong consideration at first overall. We'll see tomorrow that the forwards are anything but poor, but for now, let's look at some comparables to better understand how Jones might perform in the NHL. In this case, a comparable player was someone who played his draft year in the CHL, had an adjusted points per game rate (regular season and playoffs) between 0.84 and 1.02 (90% to 110% of Jones's offensive production), and was selected with one of the draft's first six selections. These were the results:

The list is actually less mixed than I was expecting, and features several older players, which is comforting given that Jones is one of the older players among the top prospects. I've highlighted the players who also had similar goalscoring, and find it very interesting that both of those players were identified by Pronman as anomalies because of their ability to make a quick transition to the NHL. Other players on this list took a little bit longer, but Jay Bouwmeester, Zach Bogosian and Karl Alzner were all playing top minutes to varying degrees of effectiveness by age 22. It's too soon to make any kind of call on Morgan Rielly, and Dana Murzyn is actually a pretty good worst-case scenario (he played over 800 games in the NHL).

As you'll see when I look at a couple of the top forwards tomorrow, I don't think it would be wise to take Jones first overall, but if Colorado (or someone else) does go in that direction, they'll probably end up with an excellent player. With one notable exception (Cam Barker), the disappointing defensemen from the top of the draft have generally been drafted out of other leagues (Erik Johnson, Jack Johnson, Ryan Whitney), which might make them more difficult to project; haven't had nearly as much offense (Luke Schenn, Rostislav Klesla); or have been off-the-board picks (Thomas Hickey). Jones doesn't have any of those marks against him, and is likely to contribute at a high level for years to come.

Next up tomorrow morning: Nathan MacKinnon