Share All sharing options for: NHL Draft 2013 - Introduction to Comparables

With the 2013 draft only a month away, I thought it was probably (past) time (judging from some of the comments to other articles) to start gathering information about some of this year's prospects. With the Oilers picking seventh in this year's draft, my focus will definitely be broader this year; instead of focusing almost exclusively on the players with a chance to go first overall, I'll be taking a tour through the top thirty players in Derek's Consensus Rankings.

Of course, there's already a lot of great information available: the major scouting services are all providing regular updates, other sites in the SBN network are providing regular profiles, and individuals like Corey Pronman are offering a lot of detailed analysis. It's a glorious time to be a hockey fan, but it does raise the question of how I can provide value for you beyond simply gathering quotes from these other sources (though I'll do some of that too).

One of the ways that I hope to do that is by looking at comparables. This is something that I've often done for players that the Oilers have drafted or acquired (most recently for Kale Kessy), but I haven't used the tool much in evaluating players leading up to the draft. Over the next several weeks, that's going to change, and my hope is that it will give us some insight into which players might have the most NHL success.

The methodology is quite simple. I'll be considering the league each guy played in (note: I count the CHL as one league), whether or not the player is in his first year of draft eligibility, where each player is projected to go in the draft, and the amount of offense each player brings to the table based on his performance during his draft year in the regular season and playoffs. Since I'll be looking at players drafted as far back as 1983, that last part is tricky. As I'm sure you all know, teams tended to score a lot more goals in the 80's and early 90's than they do today. The graph below shows how many goals per game the average team scored in the three CHL leagues over the last thirty-one regular seasons: 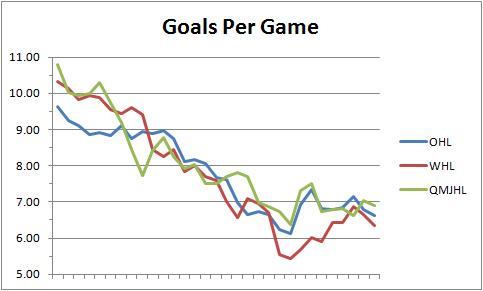 So how can I take this into account? I decided to adjust each player's offense to a league that scored 6.8 goals per game. For example, Ryan Smyth was drafted in 1994 after scoring 0.69 goals per game and 1.46 points per game, but Smyth played in a league that scored 8.44 goals per game, which is 19.4% more than the benchmark I've set. As such, for the purposes of comparing him to players today, his totals are adjusted down 19.4% to 0.56 and 1.17 respectively. I think it's a pretty reasonable way of doing things, but I'm open to new suggestions.

Of course, as we move through this exercise, it's important to remember that each player is unique. The guys with the best offense generally do well, and those with the worst generally don't become stars, but there are exceptions, especially at the top end. Sometimes a player lights things up in the CHL but absolutely craters once he gets to pro hockey. Looking at the fifteen best and fifteen worst CHL forwards drafted in the top ten in terms of adjusted points per game over the last thirty years demonstrates both points well:

This is kind of a side note, but it's interesting that the WHL is so underrepresented in that top chart with just one player, and that one player is Pavel Brendl: not good. Given that this is a thirty-year trend, and that we're already adjusting for league offense, there's no obvious explanation jumping out to me for why this is the case.

Interestingly, these lists suggest that teams are making fewer terrible mistakes. That first list has representatives from pretty much every era, but the second one hasn't seen a new member for over a decade. I don't know whether some simple statistical analysis is helping teams out, the availability of games has helped teams suss out talent more effectively, or more good hockey talent is being developed for teams to choose from, but for one reason or another, teams seem to be making fewer awful choices at the top of the draft.

First up this afternoon: Seth Jones.