Yesterday, I profiled Samuel Morin, a CHL defenseman who rose substantially in the rankings between April and June. Today, I'll be profiling the other late-rising defenseman, Mirco Mueller. Mueller actually came from further back than Morin, jumping from 56th in the April edition of the NHL Numbers consensus rankings all the way to 26th in June, one spot behind Morin.

Like Morin, Mueller has intimidating size (he's 6'4.5''), strong mobility, and merely decent offensive results. The offensive results, in particular, are awfully close. Morin scored 0.10 adjusted goals and 0.44 adjusted points per game in 2012-13 compared to 0.09 and 0.50 for Mueller, a gap to be sure, but not a large one (it's basically a four-point swing).

But despite the similarities, some scouts rate these players very differently. When I was talking about Morin I mentioned that Craig Button had Morin ranked 13th and that Corey Pronman had him ranked 60th. This time, the opinions are reversed with Button dropping Mueller to 44th and Pronman pushing him up to 26th. They're both clearly seeing some differences that aren't showing up much in the offensive results. So what's the difference between these two players?

Judging from Pronman's scouting report, Mueller is more polished defensively: "The most impressive aspect of his game is his hockey sense. He is a top-end thinker with and without the puck. He slows down the game on breakouts, making good decisions with the puck. He also makes a lot of defensive stops due to his good positioning and reads... He will deliver very good value to his team from his work in his own zone." Kyle Woodlief adds that Mueller "shows outstanding vision and passing skill" and that "he's an elite skater with terrific mobility for a big man" and yet Woodlief has Mueller tenth among defensemen and has Morin fourth.

It would be great to hear one of the scouts speak to the "Mueller or Morin" question directly, but in reading the reports, those who prefer Morin seem to strongly emphasize his potential upside (he's four months younger than Mueller), and it also looks like meanness is a big distinguishing mark. Button describes Morin as a player who will "assert physically and has a territorial mindset and as he continues to mature, will have the ability to make it very unpleasant to play against him." Kyle Woodlief echoes that, saying that Morin "plays with a mean edge that is highly appealing for NHL clubs." It's a difference that comes through in the numbers as well: Morin had four fights and 133 PiMs in 52 QMJHL games this year compared to one fight and 63 PiMs in 69 WHL games for Mueller.

I generally don't value meanness all that much, but I know that many NHL folks do, and when that meanness comes in a 6'6'' package, those who do value it are going to be salivating. Given the small gap in offense, maybe it's a sensible tiebreaker. But before settling on that, let's first look at how that small gap in offense impacts Mueller's comparables. In this case, a comparable player was someone who played his draft year in the CHL, had an adjusted points per game rate between 0.45 and 0.55 (90% to 110% of Mueller's offensive production), and was selected somewhere between 21st and 31st overall. A player with similar goal-scoring is highlighted in blue.

A lot of familiar names at the bottom of the list from Morin's comparables, but many of the names at the top are new and a lot of those provide some hope for Mueller. In the chart below I've listed each player's number of regular season games, his time on ice per game (if the NHL was recording TOI for more than half of the games he played), his points per game, and the first season he played in at least forty games. 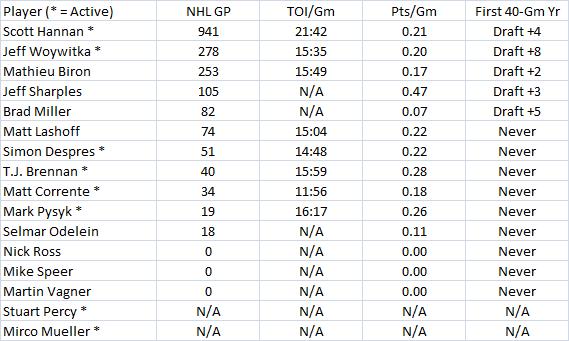 Scott Hannan is obviously the class of the group, and probably a good example of what scouts are thinking of with Mueller. But a little bit further down the list we find three defensemen who are just now starting to find their way at the NHL level in Mark Pysyk, Simon Despres, and T.J. Brennan. I wouldn't bet on all of them to pass Jeff Woywitka's GP total, but i have no doubt that their combined contributions over the next several seasons will make this list of comparables a lot more attractive.

For me, that little gap in offense, and my impression that Mueller is a little bit more put together defensively has me preferring Mueller over Morin ever so slightly.

Next up tomorrow morning: Ryan Hartman