The Predictive Value of CHL Save Percentage

Share All sharing options for: The Predictive Value of CHL Save Percentage

One player that I haven't written about who's often ranked inside the top thirty, and is currently sitting at 50th in the NHL Numbers consensus rankings is goaltender Zach Fucale. I haven't written much precisely because of his position. NHL teams aren't as good at evaluating teenagers and identifying future NHL goaltenders as they are at evaluating teenagers and identifying future defensemen and goaltenders. At least, that's what I found looking at data from 1997-2005 when I did a study on finding quality players in the draft a couple of years ago. An inspection of more recent data doesn't suggest that anything has changed. 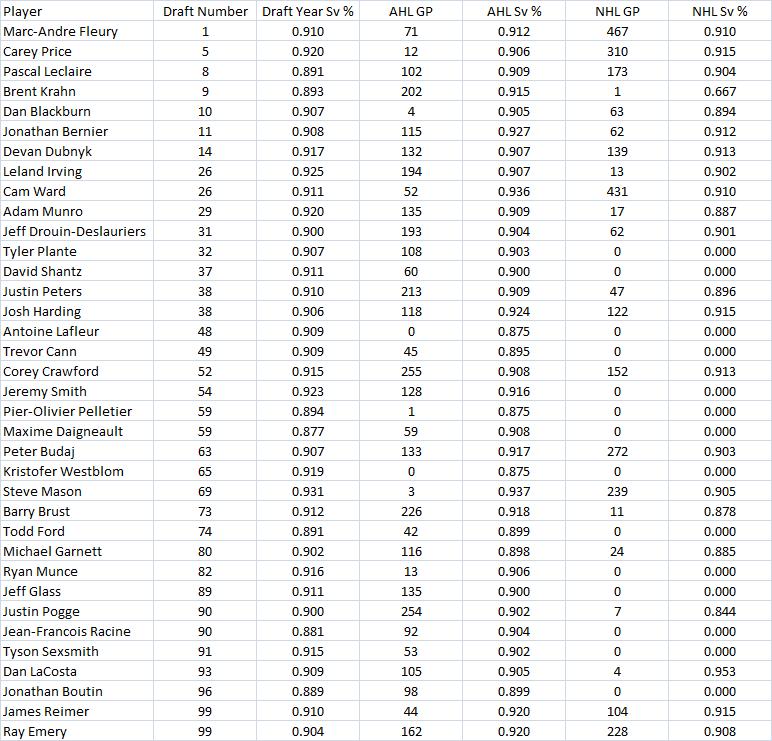 This is especially true when we compare that level of success to the success scouts have with forwards. In the even bigger wall of numbers below, I've looked at every forward who was drafted out of the CHL with one of the first one hundred picks in the draft from 2000 to 2007 (I didn't filter out over-agers because of time constraints, but that would have been a good thing to do), and presented each forward's career regular season points per game in the NHL. 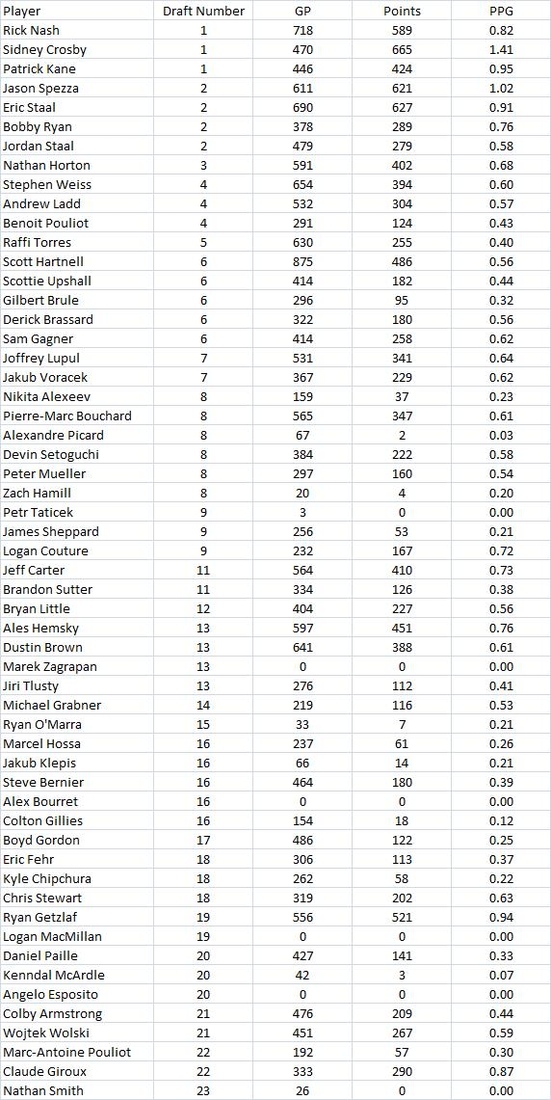 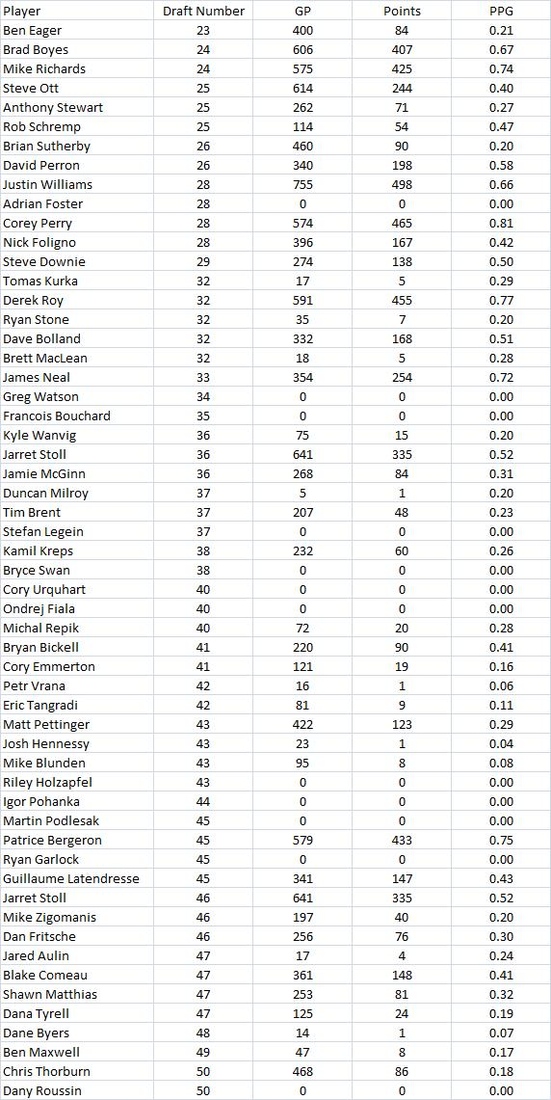 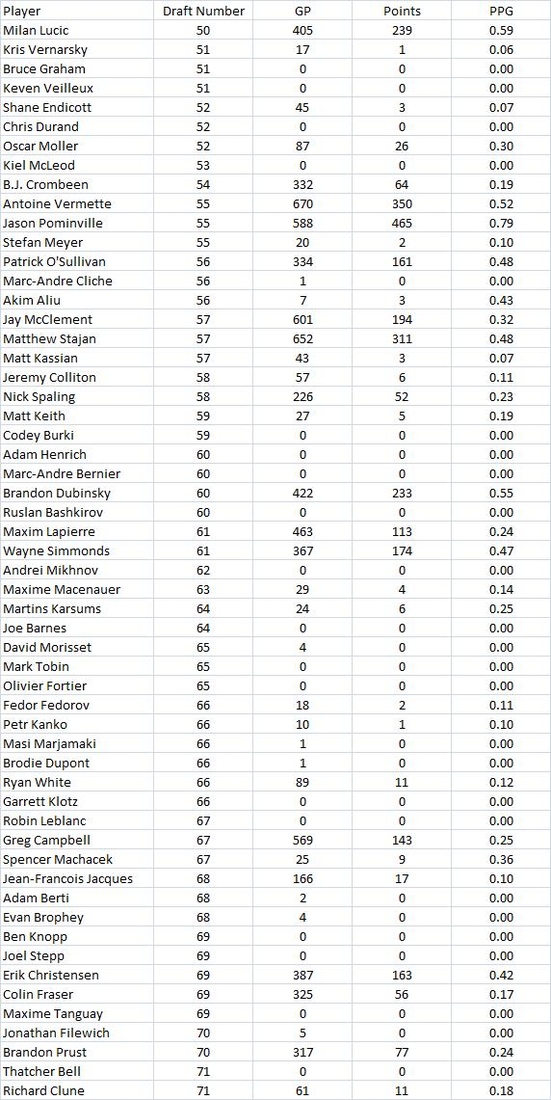 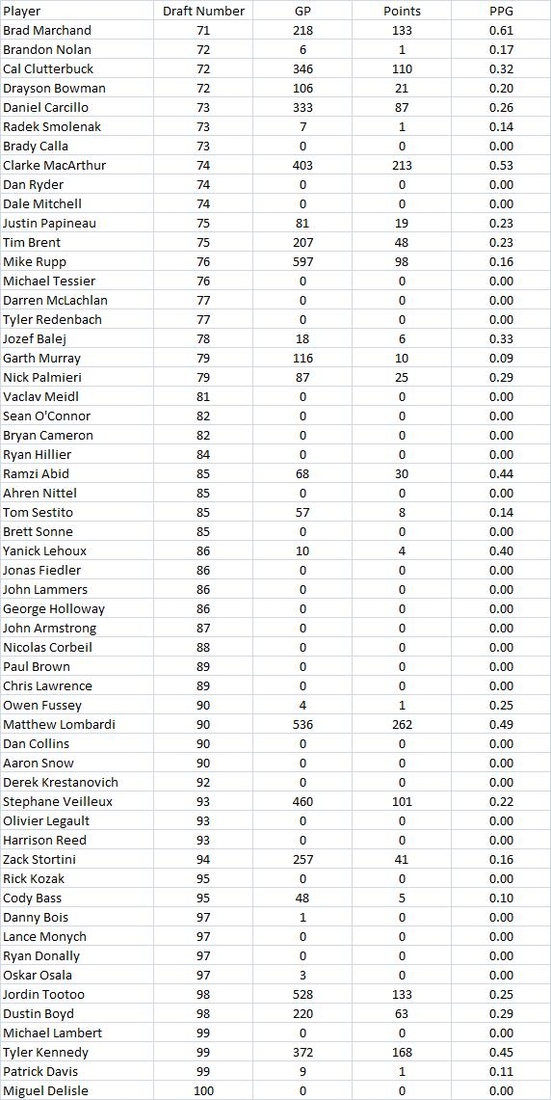 The scouts do much better here. The correlation between draft position and points per game is a much better 0.55. As with goaltenders, the correlation dips when we limit the results to forwards with at least 100 games, but it's still a relatively respectable 0.47.

This alone suggests to me that teams are better off avoiding goaltenders. Scouts just aren't as good at identifying NHL-caliber talent at the position, so you're going to get more value by focusing on the other positions, at least early on.

But there's still another reason to avoid goalies early on: they simply don't contribute much during the first six seasons after being drafted, and with a system that requires getting value for money, it doesn't make sense to be using first and second-round picks on the players least likely to provide value on their entry-level and RFA contracts. In the chart below, you'll see that just five of the thirty-seven goalies played in at least 100 games in the first six years after being drafted.

Even the goaltenders who eventually become starters aren't generally able to do so quickly, and many who do play earlier aren't really helping. Furthermore, there's a lot more risk of outright disaster playing a young goaltender to find out what you've got only to realize he's not very good than there is if you have a similar situation with a player at another position because players at other positions can be sheltered much more effectively. Taking a goaltender early is needlessly risky, and is one reason that I just won't have any near the top of my list.

Next up this afternoon: Mirco Mueller