As you know if you've been following this series, one of the key data points I use while looking for comparables is a weighted scouting average provided by Derek Zona at NHL Numbers. After Bob McKenzie released his final list, which included some significant movement from his mid-season list, I was wondering what I'd need to do to account for that new information. Fortunately, Derek made that easy for me by updating the NHL Numbers consensus rankings last night, which takes this new data into account. Thanks Derek!

And now... Morgan Klimchuk. Klimchuk has so much positive verbiage around him that I was surprised to see him only come in at 31st in the consensus rankings. Craig Button describes Klimchuk as "multi-dimensional in his play and when you combine that versatility with the IQ and the determination, you have a player who helps teams win in all of the substantive areas." Corey Pronman offers a slew of compliments before noting size as the one potential drawback, though even there he's prepared to qualify the critique saying that "Klimchuk is a bit undersized at 5'11", but he works hard in battles, will drive the net, [and] is also a committed defensive player."

So what's pushing Klimchuk out of the top 30 on many scouting lists? Size is probably part of it, and the fact that he played for such a poor team probably doesn't help, but the biggest thing is that the offense just isn't there to the same degree as many of the other top prospects. Granted, he didn't have a lot of offensive help in Regina, but he also didn't lead his team in scoring (he was five goals and four points behind 20-year-old Lane Scheidl).

It's not a long list of comparables, but it is a much better small group than I was expecting. Still, with only three players listed, it probably makes sense to expand the criteria slightly to get a larger sample of similar junior seasons. In this case a comparable player was someone who played his draft year in the CHL, had an adjusted goals per game rate between 0.46 and 0.62, an adjusted points per game rate between 0.96 and 1.30 (85% to 115% of Klimchuk's production), and was selected somewhere between 21st and 41st overall. 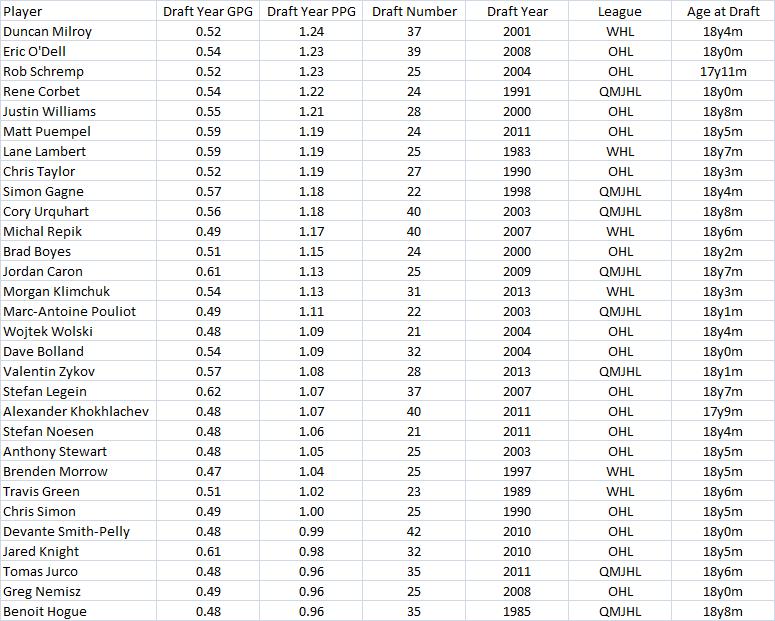 Here we have a much larger list, and as you'd expect, a much wider range of outcomes. As is so often the case when we're this deep in the draft, there are no true superstars, but there are certainly a few players who had (and are having!) excellent NHL careers. Let's see how each of these players did in terms of NHL games played during the regular season, and career points per game: 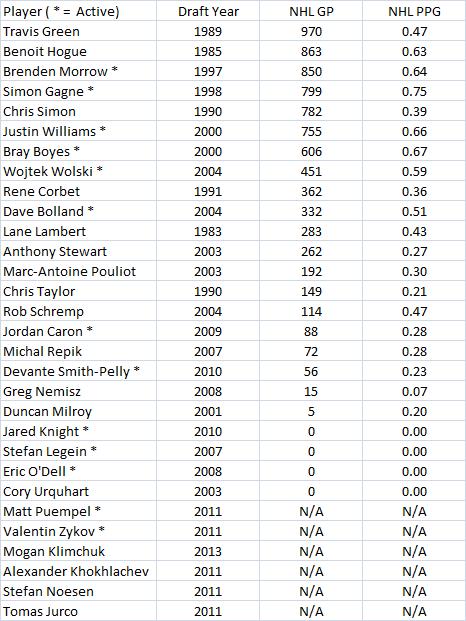 Of the players on this list drafted in 2010 or later, a third of the group has already played in at least 400 NHL games, and nearly a third have been strong offensive players (half a point per game or better). Combine that potential for offense with a scouting report that suggests Klimchuk is a reasonably strong defensive player, and it seems to me that he's generally been a touch underrated.

Next up this afternoon: Samuel Morin