Bob McKenzie released his final draft rankings yesterday, a list that tends to be very instructive about where players are actually going to be selected in the draft this weekend, largely because McKenzie's list is "a compilation based on input from various scouts around the National Hockey League." This has some rather obvious application for my draft comparables project, in which I've been using the NHL Numbers Consensus rankings produced by Derek Zona as an estimate for draft position. I'm doing so because I value the input of scouts who generally do a very good job of identifying the best talent in the draft.

It does, however, mean that what I'm using for a player's draft number will have a significant impact on the comparables that come out on the other side. I made this point when I wrote about Max Domi earlier this month:

We're now getting to the point where projected draft position matters quite a bit in terms of establishing comparables. Max Domi is ranked 15th in the consensus rankings, but several scouts actually have him ranked higher.... Statistically, Domi is slightly ahead of Hunter Shinkaruk (and Sean Monahan), who came in at 9th (and 7th) in the consensus rankings. If we look for comparables thinking of Domi as a top-ten pick, his comparables look very similar to Shinkaruk's.... It's a long list that includes several really good NHL players. But if we treat Domi as I've treated everyone else, and use his position in the consensus rankings as a basis of comparison, things are a little bit less rosy.

Since that kind of change is going to make such a big difference, I thought it might be worthwhile to compare the two lists and note any significant differences. 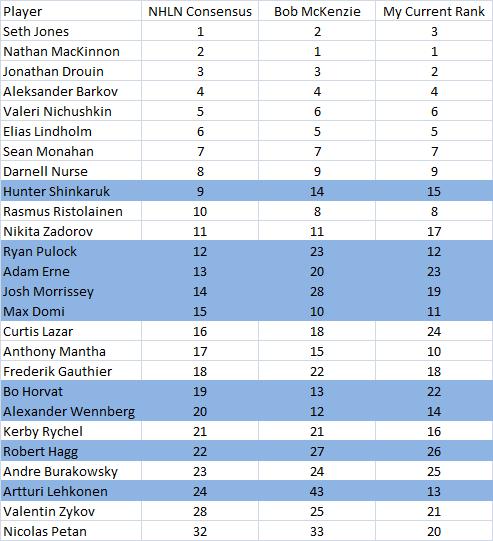 In many instances, I have (unknowingly) been moving alongside the consensus: Wennberg, Domi, and Ristolainen all moved higher on my list while Shinkaruk, Erne, Morrissey, and Hagg were moving down. In a few other notable instances (Pulock, Horvat, Lehkonen), I either didn't move with the consensus or actually moved in the opposite direction.

Nevertheless, for some of these players, the change is rather significant, and while I won't be doing a second detailed profile on these players, I thought a brief update might be in order for the players who are in a very different position on McKenzie's list, using the McKenzie number as a new estimate for the player's draft position. For the European players, this really isn't necessary since I was already taking a much more expansive look, but for the CHL players, it does seem worthwhile.

This is, unsurprisingly, a less attractive list than the first one I put together for Shinkaruk, and I think, better reflects the risks present in selecting him. That said, I feel pretty comfortable with where I've got him on my list now.

In this case, a comparable player was someone who played his draft year in the CHL, had an adjusted points per game rate between 0.71 and 0.87 (90% to 110% of Pulock's offensive production), and was selected somewhere between 18th and 28th overall. A player with similar goal-scoring is highlighted in blue.

One of the problems with Pulock's original group of comparables was their youth, and that's a problem here as well. Of the four players who have had a chance to establish themselves, Ivan Vishnevskiy came to North America but struggled to make the NHL and is now playing full-time in Russia, Jonathan Blum just started to become an everyday player in Nashville this season, and Brian Benning and Tim Gleason have both played over 500 games, several of those in a top four role. The shifting scouting consensus is startling, but if anything, I'm inclined to move Pulock the other way.

As with Pulock, this is mostly a list of younger players who haven't yet had much time to suss out what they'll be at the NHL level. Ryan Getzlaf makes the list this time to remind us that some of these players will overachieve wildly relative to how they've produced as teenagers, but Colby Armstrong offers a much more reasonable picture of the kind of player Erne can hope to be if his development goes well. I've already got Erne quite low on my list, and this new look won't change that.

In this case, a comparable player was someone who played his draft year in the CHL, had an adjusted points per game rate between 0.63 and 0.77 (90% to 110% of Morrissey's offensive production), and was selected somewhere between 23rd and 33rd overall. A player with similar goal-scoring is highlighted in blue.

Defenders who bring this kind of offense don't typically last this long in the draft, and all three players besides Morrissey in this chart have played in the NHL. Blum is still at the beginning of his career, so it's difficult to know where he might be five years from now, but both Gleason and Quint (who's still playing at a high level in the KHL) have had lengthy careers. If anything, seeing this list has me thinking about moving Morrissey up a spot because it makes him look like a pretty safe bet.

No big surprises in this chart since I already looked at a very similar situation in the original article on Domi. One thing that comes through quite clearly is that even at this early stage in the draft, there are quite a few players who simply don't work out at the NHL level. The lack of safety Domi provides is one of the reasons I had Mantha higher than him before, and this look hasn't changed that for me. In fact, this is a good reminder that a defenseman like Pulock might be a safer bet in this spot even if he doesn't have quite the same upside.

This doesn't do anything to change my mind on Horvat. The player simply doesn't have as much offense as you'd hope for from a prospect at that early stage of the draft. He probably belongs somewhere in the first round, but of the players I've profiled so far, I think he's the most overrated by the scouting consensus.

I've made a few adjustments to my rankings based on this new information, but nothing that I would consider particularly drastic, and those changes can be seen below.

Next up tomorrow morning: Morgan Klimchuk