Bob McKenzie presented his final list before the draft last night, and in some instances, it's quite different from the consensus rankings which Derek put together in April. If the consensus rankings are updated, I'll probably need to tweak a few profiles, but even if they aren't, there are a few cases where the April rankings probably aren't a fair reflection of the scouting consensus. I'll address that fact later this afternoon, but fortunately for me, Valentin Zykov's rankings are very similar (BM: 25 NHLN: 28), which allows me to use the same methodology for Zykov without too much hesitancy.

Zykov is a prospect who has taken a huge leap forward this year offensively. When I was writing about Valeri Nichushkin, I produced a list of players who spent their Draft -1 seasons in the MHL, Russia's top junior league, over the last few yeras. Zykov's lack of offense left him at the bottom of that list.

So when he arrived in Baie-Comeau this season, one probably shouldn't have expected a top line offensive player. And yet, Zykov went on to finish second in team scoring, behind only 20-year-old Petr Straka with seventy-five points in sixty-seven games, including forty goals. His shooting percentage during the regular season was a little on the high side at 16.1%, but his 3.7 shots per game is certainly a respectable total.

Both The Scouting Report and Corey Pronman have a lot of good things to say about Zykov's puck skills and physicality, a combination that often leaves teams drooling over the next potential power forward. But in the midst of all of that positivity Pronman notes that "skating is an area of concern," and skating is always a pretty big red flag for me.

A quick look at each player's number of regular season games and career points per game demonstrates that, while most of these players have made it to the NHL at least briefly, only Dave Bolland has had what might be considered a strong NHL career.

Of course, most of these players still have plenty of time to establish themselves as good NHL players. For that reason, I decided to expand the search slightly in order to find a few more players who have traveled more of their NHL road. In this case a comparable player was someone who played his draft year in the CHL, had an adjusted goals per game rate between 0.49 and 0.66, an adjusted points per game rate between 0.92 and 1.24 (85% to 115% of Zykov's production), and was selected somewhere between 18th and 38th overall. 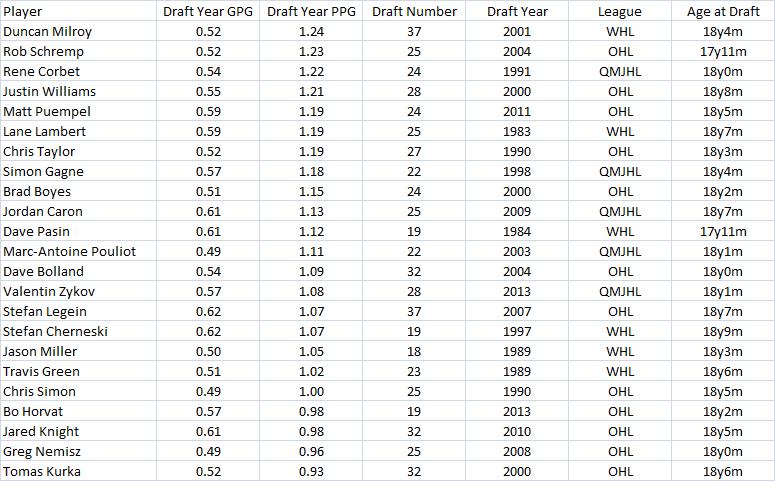 It's a much larger sample of players, and more of them have written a lot of their story, which should give a better idea of the range of likely outcomes. Below, I've again made note of each player's number of regular season NHL games and his career points per game. 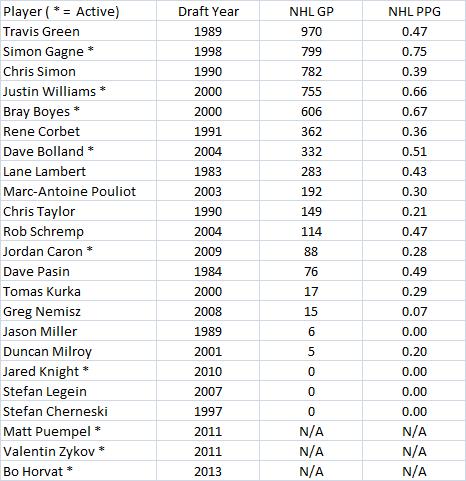 This is probably a better reflection of the possible outcomes. There are a few really good offensive players, but a lot of guys who didn't end up doing much at the NHL level. Of the 22 players drafted in 2010 or later, four of them have been able to score over half a point per game, and six will cross 400 NHL games (I'm assuming that Bolland will make it). That makes Zykov a pretty high-risk pick, which is why I've got him near the bottom of my listed players, but a guy that I'll likely have inside the first round.