CHL Forwards and Relative Plus Minus

Share All sharing options for: CHL Forwards and Relative Plus Minus

I understand that +/- is a dirty word. After all, it's counted in a goofy way and goal events are rare enough in hockey that the results are often not a particularly good indication of skills. Alas, +/- is one of the few statistics that all three Canadian Hockey Leagues keep track of, so I feel like we should at least try to find a way that it can be useful. My attempt at this is Relative +/-, a concept that I first used to analyze draft prospects before the 2011 draft.

In the chart below, I've calculated the Relative +/- for each forward drafted in the first round from 2000 through 2007, and have included their NHL points per game (regular season) as a measure of whether or not the forward in question became a useful offensive player. Any player with less than 150 (regular season) games was considered to have a points per game of zero.

With Alex Bourret hanging out at the top and Rick Nash near the bottom, we're pretty obviously not in the realm of perfection. But, there is a positive correlation between the two variables (Pearon's r = 0.47 and Pearson's r = 0.34 if we remove Sidney Crosby from the list), but if you're not into looking at correlations, just look at the chart condensed into the average scores for each of the four quarters:

It's a pattern makes good sense for a couple of reasons. Firstly, good players tend to do a better job of generating goal differential than bad ones, and in the CHL, the gap in ability between good players and bad players is larger, which should make +/- a better indicator than it is in the NHL. Secondly, good players with a poor +/- ranking often have that poor +/- ranking because they're being given many defensive responsibilities and have less opportunity for offense. It seems natural for a player being used in a purely defensive role in the CHL to probably have a similar role in the NHL, thus reducing their chances of becoming an offensive star at the NHL level.

So what about this year's prospects? I've calculated the Relative +/- of each CHL forward who played at least 50 regular season games and was ranked inside the top 50 in the last edition of Derek's consensus rankings. The four players eliminated from consideration because they didn't play enough games are Nathan MacKinnon, Jonathan Drouin, William Carrier, and Nick Sorensen. 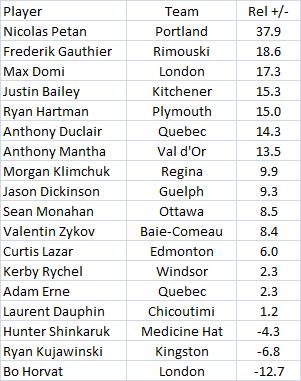 Very interesting results. I haven't profiled Nicolas Petan yet because he's ranked 32nd in the consensus rankings, but in addition to being the leading man on this list, Petan also led the WHL in scoring, so Petan is going to jump the queue and get profiled this afternoon. Other players of interest on the positive side are Frederik Gauthier and Max Domi who would both be on the edge of the first and second quarters. On the negative side of things, we've got Hunter Shinkaruk and Bo Horvat who would both be comfortably in the bottom quarter. In terms of the impact on my list, I already had Domi quite high and Horvat quite low, so they aren't impacted among the players I've profiled so far, but I did drop Hunter Shinkaruk a few spots and bumped Frederik Gauthier up slightly.

Next up this afternoon: Nicolas Petan