Andre Burakowsky is ranked 23rd in the consensus rankings and is the second player in this series who spent most of his time in the Allsvenskan. The first was Alexander Wennberg, who was able to generate a lot of offense in that league. As I mentioned in the article on Wennberg, the present incarnation of the Allsvenskan relatively new, having played its first season in 2005-06, which makes it difficult to find specific comparables. But there have been a few players drafted in the first round who played in the Allsvenskan, all of whom are listed below.

Wennberg was clear of the pack in this chart, but Burakowsky is right in line with a couple of other young Swedes who have established themselves as NHL players. Seems like a solid foundation. So what about the scouts? Well... Craig Button has Burakowsky ranked 58th overall and Corey Pronman has him 13th... so there's a range of opinions. And I get that. Burakowsky is an offensive player who didn't earn much ice time in Sweden's second division and thus didn't do much scoring. On the other hand, he's shown enough high-end skill internationally that, according to Pronman, "his game has great upside, and he can be a top-line player at his peak."

The big question is whether or not it's realistic to expect him to achieve that potential, and the data from this past season makes that a tough call. So what about looking back to last season? Burakowsky spent the 2011-12 season in Sweden's U-20 league and scored at a point per game rate as a 17-year-old. Looking for comparables should help us find out whether Burakowsky looked like a special offensive player in that league one year ago. In this case, a comparable player was someone who played his draft -1 year in Sweden's U-20 league (minimum 20 games) and had a points per game rate between 0.90 and 1.10 (90% to 110% of Burakowsky's offensive production). I've also included any forwards with more than 1.10 points per game just to see what "really good" looks like in that league, and highlighted all four (!) of the players on the chart from this year's draft. 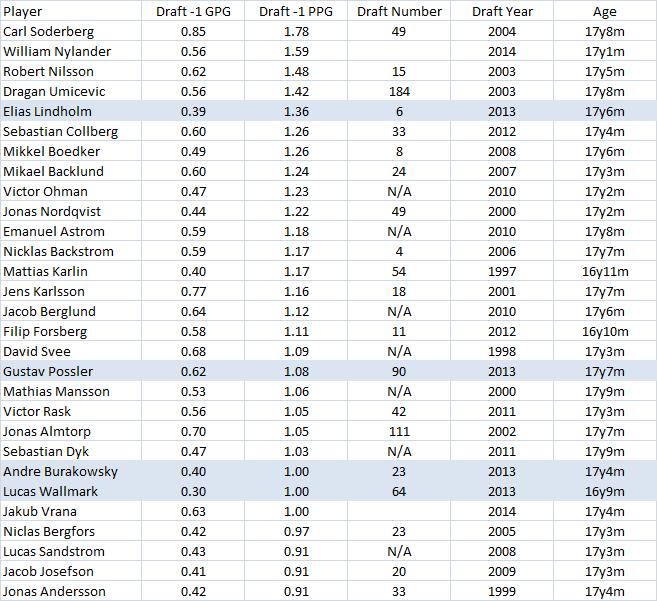 This probably doesn't provide too much by way of certainty. Some of these players performed so poorly in the year that followed that they didn't get drafted at all. Others improved enough to get drafted inside the top ten (though none of those players are in Burakowsky's comparable range). The best players aren't necessarily found at the top of the list, and the worst aren't necessarily at the bottom. In other words, the range of outcomes is very wide indeed.

Seeing the other players from this year's draft class is helpful in situating Burakowsky for me, especially if we throw in Nick Sorensen who scored 0.97 points per game in this league in his Draft -2 season. Sorensen was a point per game player in the QMJHL in 2012-13; Lucas Wallmark played in the Allsvenskan, but scored ten points in sixteen games; and Gustav Possler ran in place statistically playing in Sweden's U-20 league.

Has Burakowsky been definitively more impressive statistically than those three in 2012-13? I don't see it. And with a good-but-not-great Draft -1 season, I just don't know if it makes sense to push Burakowsky into the first round of the draft. If he had performed similarly to, say, 2014 prospect William Nylander, I'd be more inclined to give Burakowsky the benefit of the doubt. As it is, his performance in addition to some of the questions being raised about his game by scouts have me thinking that Burakowsky probably isn't a solid pick in the first round, but could be a great boom/bust selection in the second.

Next up tomorrow morning: Artturi Lehkonen