Bo Horvat is a player with quite a bit of momentum going into the draft. His team won the OHL championship, and he raised his level of play in the playoffs in order to help them out, increasing his goals per game from 0.49 during the regular season to 0.76 during the playoffs. Even though his overall statistical performance isn't jaw-dropping, that offensive improvement during the playoffs, and a solid all-around game has him moving up many lists. Corey Pronman is one scout who has Horvat ranked higher than the consensus at 14th, and has this to say about the player:

Horvat is one of the most complete forwards in this draft. He is tough, hard working, and defensively skilled, with enough offensive ability to project as a scoring line player.... His creativity progressed throughout this season, and his puck skills, hand-eye coordination, and playmaking vision all rank as above average; he can flash high-end offensive skill.

And there's more praise where that came from if you read the whole thing. But as I said above, his statistical performance isn't all that impressive. Is it so bad that it's a deal-breaker in the first half of the first round? Let's take a look a look at Horvat's comparables to try to find out. In this case a comparable player was someone who played his draft year in the CHL, had an adjusted goals per game rate between 0.51 and 0.63, an adjusted points per game rate between 0.88 and 1.08 (90% to 110% of Horvat's production), and was selected somewhere between 14th and 24th overall.

It's not exactly a murderer's row. In the chart below, I've listed each player's number of regular season games and his career points per game.

A couple of solid long-time NHL players and a couple of draft busts. If we widen the scope, do things look better? In this case, we'll say a comparable player was someone who played his draft year in the CHL, had an adjusted goals per game rate between 0.49 and 0.66, an adjusted points per game rate between 0.83 and 1.13 (85% to 115% of Horvat's production), and was selected somewhere between 9th and 29th overall. 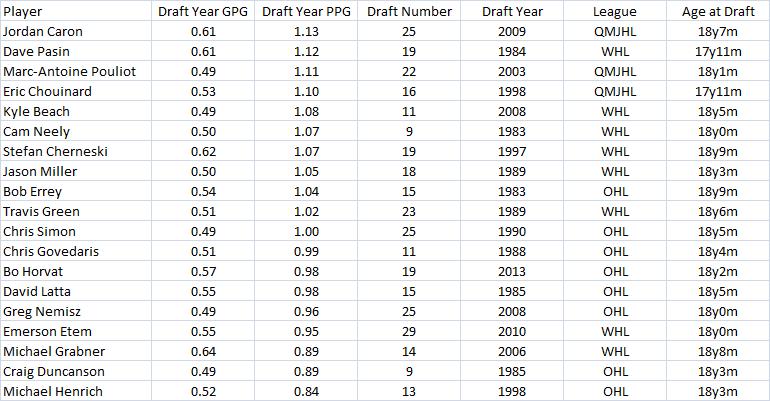 As with most of these wider looks, there's a player or two who catches your eye (Cam Neely), but in this particular case, there's also a whole lot of warning signals. I've again listed each player's number of regular season games and his career points per game in the chart below to give a sense of what I'm talking about. 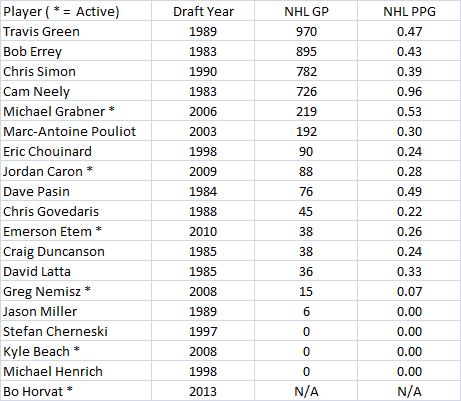 Frankly, even with the presence of Neely, this is more discouraging than the smaller list of close comparables. Just two players clock in above half a point per game in the NHL, and one of those (Grabner) just barely squeaks over the line. Players with this statistical profile in the CHL just don't generally work out as offensive players once they get to the NHL. Now, the scouting reports all suggest a player who has good skating and is solid defensively, so Horvat may have better odds than the above lists might suggest of making it to the NHL at all, but I'd peg his odds of becoming an impact offensive player as very low.

Next up tomorrow morning: Alexander Wennberg