Frederik Gauthier has a lot of tools. He's 6'4.5'' and 215 pounds, the kind of size that's going to be immediately attractive. Red Line Report describes him as "very defensively aware and responsible," Corey Pronman says that he "line[d] up against the opposition's best players and [took] a lot of defensive zone draws," and The Scouting Report points out that he has "above average skating ability" and that "his hockey sense and positional awareness is well developed." None of them have him ranked inside the top ten. Why? Offense. There just isn't enough of it.

The scouts seem to agree that Gauthier has solid offensive skills, but the results have been lacking. Some of that may have to do with a lack of opportunity on the power play as Gauthier scored just 15 of his 62 points with his team up a man. It likely also has to do with the defensive responsibilities that he's been given at even strength. But even taking those things into account, you'd hope that Gauthier would be better. He scored just 22 goals all season, and with a 16.9% shooting percentage, it's not because he was the victim of bad luck. 1.91 shots per game just isn't good enough for an offensive player, and any team drafting Gauthier is going to want to see that number improve substantially.

Can he? Let's take a look at his comparables to see what other similar players have done. In this case a comparable player was someone who played his draft year in the CHL, had an adjusted goals per game rate between 0.29 and 0.35, an adjusted points per game rate between 0.81 and 0.99 (90% to 110% of Gauthier's production), and was selected somewhere between 13th and 23rd overall.

Not a lot of hope to be found in this group, though Scott Laughton had a solid Draft +1 season, and it's far too early to make a call on how he'll end up. In the chart below, I've listed each player's number of regular season games and his career points per game, and the results aren't particularly promising.

All three of the guys we can make a call on are busts, but it is just three players. What if we widen our range a little. In this case, we'll say a comparable player was someone who played his draft year in the CHL, had an adjusted goals per game rate between 0.27 and 0.37, an adjusted points per game rate between 0.77 and 1.04 (85% to 115% of Gauthier's production), and was selected somewhere between 1st and 30th overall. 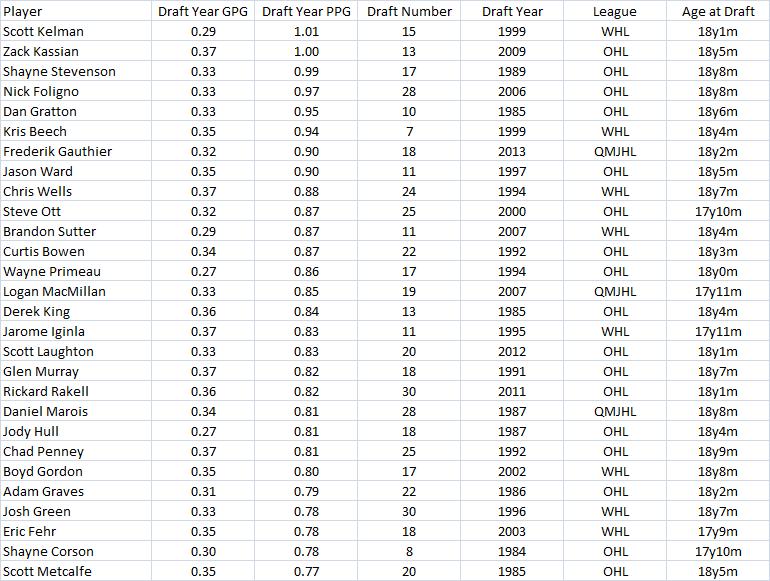 That's suddenly a very long list! And as you'd expect with such a long list of players, there are a wide variety of results once these men reach the NHL. Let's look once again at each player's number of regular season games and his career points per game. 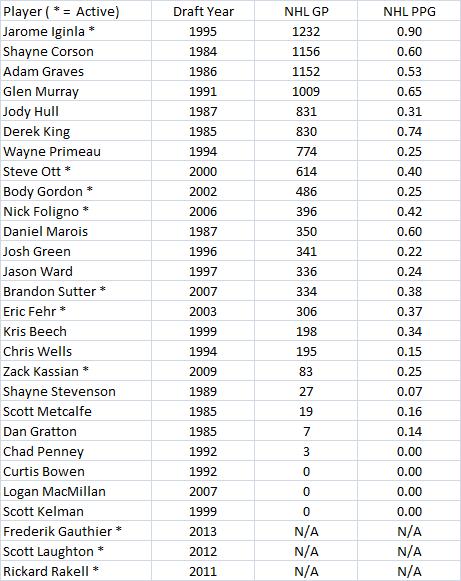 The range of outcomes is very wide. In just under half of these cases you end up with a useful player. In the rest, you end up with nothing to show for the draft pick except for wasted development time. Some folks will look at a list like this and think Gauthier has a chance be the next Iginla. I look at this list and think about how unlikely it was for Iginla to become such a great player given his performance in his draft season.

Frederik Gauthier has a decent chance of becoming an NHL player, especially given his defensive skills, but his chance of being a really impactful player isn't all that strong, and his chance of busting completely isn't negligible. As a result, I expect him to fall at least into the bottom third of the first round on my list.

Next up this afternoon: Bo Horvat