Anthony Mantha checks in at #17 in the consensus rankings after what was, by all accounts, a very impressive season. When the year began, Mantha was outside the top 30 for Craig Button and Corey Pronman, and outside (at least) the top 20 for Bob McKenzie. In September, Mantha definitely wasn't a player who was expected to go in the first round. But when a 6'3.5'' power forward scores fifty-five goals in seventy-six games, it's hard not to take notice.

Since that total came from the QMJHL, we have the luxury of checking out Mantha's shooting percentage. And though 15.2% is on the high side, it's not as outlandish as I was expecting, and is actually a slight regression from the 16.1% shooting percentage he had in 2011-12 when he scored just twenty-four goals. No, Mantha's big bump is mostly the result of an increase in shots. In 2011-12, Mantha had just 2.22 shots per game, but in 2012-13 he was able to push that number all the way up to 4.76 shots per game, more than doubling his previous output. In fact, Mantha's shot rate is better than either of the two top prospects in the draft, Nathan MacKinnon (4.62) and Jonathan Drouin (3.52). So even if Mantha was a little bit lucky, it really is just a little, and his shot rate alone is reason for optimism.

So is his scoring output the kind of thing that translates well to the NHL? Let's look at Mantha's comparables to find out. In this case a comparable player was someone who played his draft year in the CHL, had an adjusted goals per game rate between 0.64 and 0.79, an adjusted points per game rate between 1.18 and 1.44 (90% to 110% of Mantha's production), and was selected somewhere between 12th and 22nd overall.

Two busts, Bernier, and a star forward. Weird list. That there aren't very many comparables shouldn't come as much of a surprise. At this point in the draft, players who score that many goals usually just aren't available. Even among the players who are comparables, every one scored fewer goals than Mantha. His 0.72 adjusted goals per game is actually 21st among all forwards drafted out of the CHL over the last thirty years, and the guys above him are mostly pretty good company: 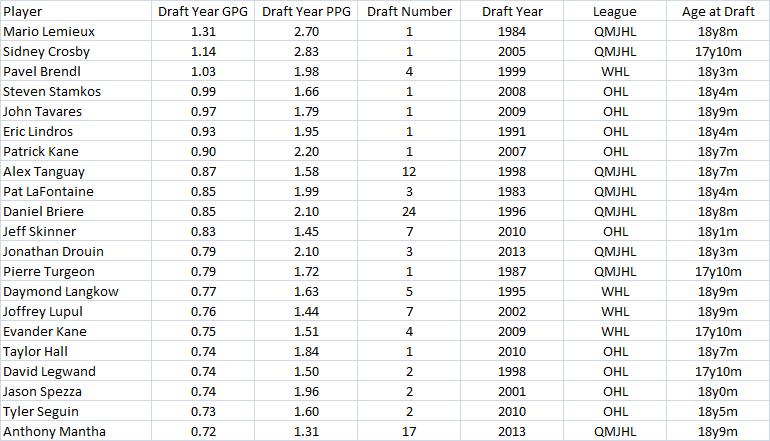 Now, Mantha's low point total stands out like a sore thumb here, but my goodness. That's a pretty good list! Of course, people really aren't worried about Mantha's goal-scoring. If they're worried about anything, it's his age. Mantha is one of the oldest players in the draft, almost exactly a year older than Nathan MacKinnon, and as I alluded to above, his 2011-12 stat line is nowhere near as impressive. But if we use those numbers to find draft comparables from the first round over the last thirty years, we'll find that players with seasons like that get drafted in the first round on a regular basis. In this case a comparable player was someone who played his draft year in the CHL, had an adjusted goals per game rate between 0.31 and 0.38, an adjusted points per game rate between 0.71 and 0.87 (90% to 110% of Mantha's production), and was selected somewhere between 1st and 30th overall. 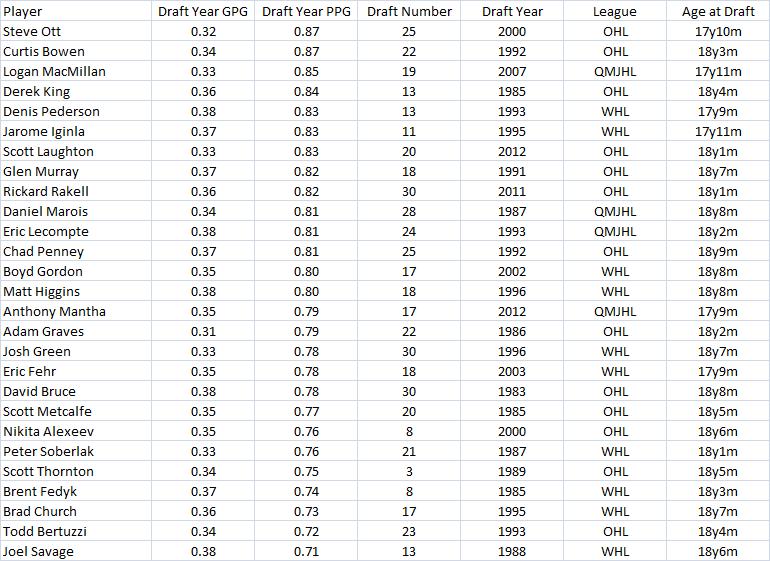 A large and varied list. But since this is Mantha's Draft -1 season, we can actually see how these guys tracked with him for two years, though since the whole purpose of this is to take age into account, it probably makes sense to first cull this list by age and look only at the players listed as 18y3m or younger in the list above. As it turns out, no one qualifies as a comparable in both seasons, but I think it's still worth looking at how these players developed:

Although it would be great to see him higher up on this list, the only men above him are having substantial NHL careers. Corey Pronman's scouting report also delivers moderately good news in its description of Mantha as "a well-above average skater for a big man" and "an above-average passer."

My ranking of Mantha is higher than pretty much everyone else out there, and I know that. Mantha's chance of playing in the NHL at all is probably lower than some of the players I've got ranked below him, but I don't think the difference is drastic, and I think he's got a better chance of becoming the kind of player that's very difficult to replace through trade or free agency than anyone I've got below him on this list.

Next up tomorrow morning: Frederik Gauthier