We're now getting to the point where projected draft position matters quite a bit in terms of establishing comparables. Max Domi is ranked 15th in the consensus rankings, but several scouts actually have him ranked higher. Corey Pronman has Domi 9th, Craig Button has him 10th, Future Considerations has him 10th. It sounds like a budding consensus... except that The Scouting Report drops him to 16th and International Scouting Services has him 25th.

Statistically, Domi is slightly ahead of Hunter Shinkaruk (and Sean Monahan), who came in at 9th (and 7th) in the consensus rankings. If we look for comparables thinking of Domi as a top-ten pick, his comparables look very similar to Shinkaruk's. In this case a comparable player was someone who played his draft year in the CHL, had an adjusted goals per game rate between 0.54 and 0.66, an adjusted points per game rate between 1.29 and 1.58 (90% to 110% of Domi's production), and was selected somewhere between 4th and 14th overall. 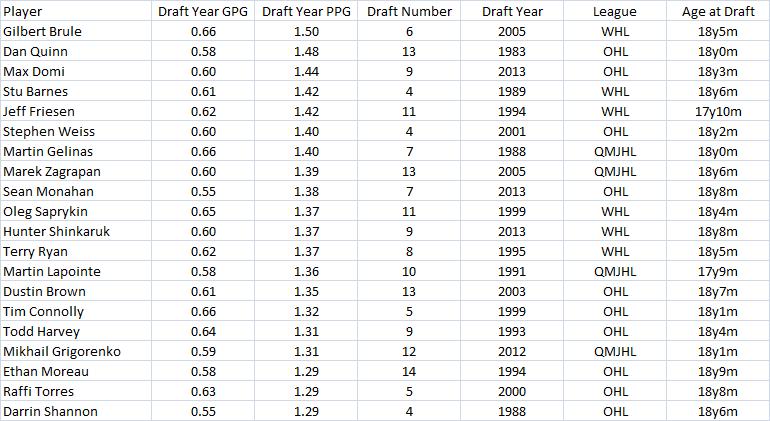 It's a long list that includes several really good NHL players. But if we treat Domi as I've treated everyone else, and use his position in the consensus rankings as a basis of comparison, things are a little bit less rosy. In this case a comparable player was someone who played his draft year in the CHL, had an adjusted goals per game rate between 0.54 and 0.66, an adjusted points per game rate between 1.29 and 1.58 (90% to 110% of Domi's production), and was selected somewhere between 10th and 20th overall.

What we've got now is a much shorter list of players, and many of the best offensive players from that first group (Weiss, Barnes, Gelinas) are gone. That shouldn't come as much of a surprise given that we're now looking at players who were drafted a bit later, but Domi's case is helpful in demonstrating the importance that draft position has on these lists of comparables. I include it because scouting consensus is, I think, a useful piece of data to consider, but in cases like this, it makes a real difference.

Anyroad, let's see how this latter group of guys did in the NHL. In the chart below, I've listed each player's number of regular season games and his career points per game, which should give us some idea of how they did offensively:

Three quarters of these players had NHL careers, and five of eight will pass 800 games unless Dustin Brown has an unexpectedly quick decline. Of course, several of these players didn't end up being counted on as offensive guys. Dustin Brown provides offense and a whole lot of physicality; Jeff Friesen had some quality offensive seasons with San Jose (and one magical playoff run in New Jersey); and Dan Quinn led the Flames in scoring during the 1985-86 season. But the other three NHL players found a different way to help their teams win. At just 5'9.5'', is Domi really capable of making that kind of adjustment?

The scouting reports are pretty encouraging in this regard with Domi being described as being "built like a bowling ball... us[ing] his low center of gravity to gain leverage in battles and drive through checkers" by Kyle Woodlief and as "having the ability to play a chippy game and win puck battles" by The Scouting Report. That ability to engage physically combined with clear offensive skills is the reason that I've pushed Domi ahead of Shinkaruk who seems to rely more on others to create offense for him.

Next up Monday morning: Curtis Lazar