After a short run of defensemen, Adam Erne comes in at #13 in the consensus rankings and begins a run of eight forwards over the next nine slots. Erne just turned 18 in April, but he's already playing at over two hundred pounds, which makes him very difficult to handle at the junior level, especially since scouts seem to agree that skating is one of his best attributes. According to Corey Pronman, Erne has been able to translate those skills into scoring chances on a regular basis in the QMJHL, but according to his boxcar numbers, Erne has had a more difficult time translating those scoring chances into actual goals.

There are a lot of young players on this list who have lots of story still to be written, but four of the five players we know more about don't suggest Erne should be expected to be a scorer at the NHL level. In the chart below, I've listed each player's number of regular season games and his career points per game. 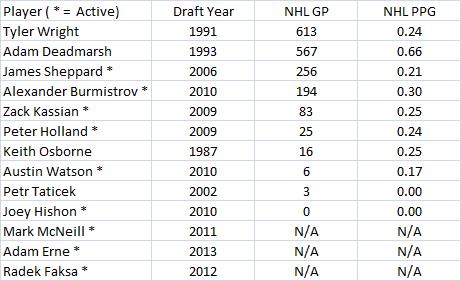 Adam Deadmarsh was an excellent player, but the rest of the group ranges from useful third line piece to complete bust. Even among the players drafted in 2009 or later, there's no single prospect that I look at and think he's likely to be a top line talent. The fact that Erne didn't improve all that much from his 2011-12 season (his adjusted offense increased by 31%) further suggests that this is his actual level of ability and that a huge step forward is unlikely.

So what is there for hope? Well, the actual skill set that Erne has seems to lend itself well to a physical third line forward, so you can at least see him filling the role well. It's not the kind of projection I'd be excited about with a top-twenty pick, but if Erne falls into the last third of the first round, I think he's probably a decent bet.

Next up this afternoon: Josh Morrissey