I began the week talking about Hunter Shinkaruk, a player who had a monster Draft -1 season, but regressed this year. At the time of writing, that regression was something that worried me, and though it still does a little, Double DD pointed out a couple of players who regressed in their draft year and still turned out to be pretty good hockey players (Daniel Cleary and John Tavares). It would be good to gather some data to look at the question more systematically, but it's fair to say at this point that the data is mixed.

That's good news for Shinkaruk, but it's also good news for Ryan Pulock. Like Shinkaruk, Pulock had a fantastic Draft -1 season offensively and then regressed this season: Pulock scored 0.83 adjusted points per game in 2011-12 and then followed that with 0.79 adjusted points per game in 2012-13. His +/- also took a huge hit, going from +33 down to -7.

As you might imagine, that latter drop had a lot to do with a change in the quality of the Brandon Wheat Kings as a team. In 2011-12, the Wheat Kings scored 271 goals and had a goal differential of +18; in 2012-13 they scored just 186 goals and had a goal differential of -94. That's a massive difference. I have no doubt that team quality was the biggest difference for Pulock's falling +/-, but how much was it a factor in his falling point totals? Defensemen aren't usually driving the play offensively, which makes them more dependent on others for creating offense than forwards. It's worth noting, then, that Pulock received a point on a higher percentage of Brandon's goals in 2012-13 (24.2%) than he did in 2011-12 (22.3%). Now, that gap isn't large enough to suggest that Pulock actually improved offensively - with fewer strong offensive players able to create for themselves, you'd expect Pulock to be in on more of the offense - but it does suggest that with a competent team around him Pulock may well have been able to put up more impressive offensive totals.

That's worth keeping in mind when you look at Pulock's comparables. In this case, a comparable player was someone who played his draft year in the CHL, had an adjusted points per game rate between 0.71 and 0.87 (90% to 110% of Pulock's offensive production), and was selected somewhere between 7th and 17th overall. A player with similar goal-scoring is highlighted in blue.

It's an interesting list. There are twelve players listed from the last thirty years and five of them were drafted in 2010 or later. Those five young players are all highly regarded. And the older guys? Not so much. In the chart below I've listed each player's number of regular season games, his time on ice per game (if the NHL was recording TOI for more than half of the games he played), his points per game, and the first season he played in at least forty games: 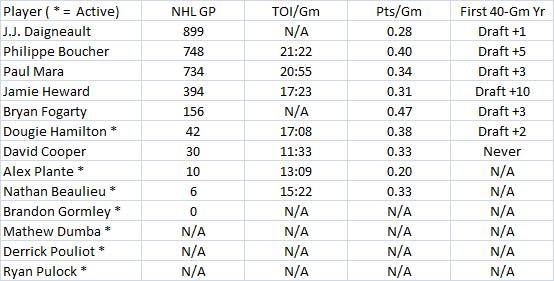 Of the seven players who have a good chunk of their story written, four are unqualified disappointments, and one of the players who had a lengthy career didn't have his first full NHL season until the fifth year after he was drafted. Though, again, the younger players are more encouraging and Pulock was ahead of this entire group a year ago. In fact, let's look at the adjusted points per game of each of these players in their Draft -1 seasons: 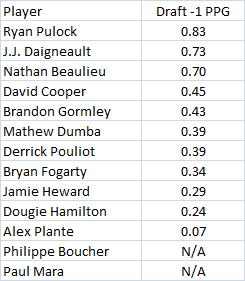 I find Pulock very tough to rank. He's a good offensive player, and has been for a few seasons in the WHL. At the end of 2011-12, he looked ready to make a big splash in the NHL, but his 2012-13 season was a clear step back, though probably in part because of his horrendous team. He doesn't draw particularly strong offensive comparables based on his 2012-13 numbers, but it's possible that his 2012-13 numbers understate his offensive ability.

The scouts seem to be having a tough time coming to an agreement too. Corey Pronman has Pulock 12th and writes that "some scouts consider him to be a top-eight player in this draft" and that "he projects as a top pairing defenseman." Craig Button has Pulock 30th and writes that "when you watch other players, you see significant strides being taken where they may have been a lot further behind Ryan at one point, their development is catching up and then you project based on that." That's a huge range. I'll probably end up somewhere in between.

Next up tomorrow morning: Adam Erne