Hunter Shinkaruk is an offensively talented player with some notable flaws: at just under 5'11'', size and strength might be an issue for him at the next level; he's one of the oldest players in his draft class, which suggests that he may have less upside than others; and his offense actually regressed from 1.41 adjusted points and 0.71 adjusted goals per game in 2011-12 (which is amazing for a Draft -1 season) to 1.37 and 0.60 in 2012-13. Despite these warning signals, Shinkaruk is ranked ninth in the consensus rankings in what everyone agrees is a very deep draft, mostly because, even though the offense fell (the gap is actually a bit larger without the adjustment), he's one of the best scorers in his draft class.

A brief look at Shinkaruk's comparables will provide us with an indication of what to expect from him at the NHL level. In this case a comparable player was someone who played his draft year in the CHL, had an adjusted goals per game rate between 0.54 and 0.66, an adjusted points per game rate between 1.23 and 1.51 (90% to 110% of Shinkaruk's production), and was selected somewhere between 4th and 14th overall. 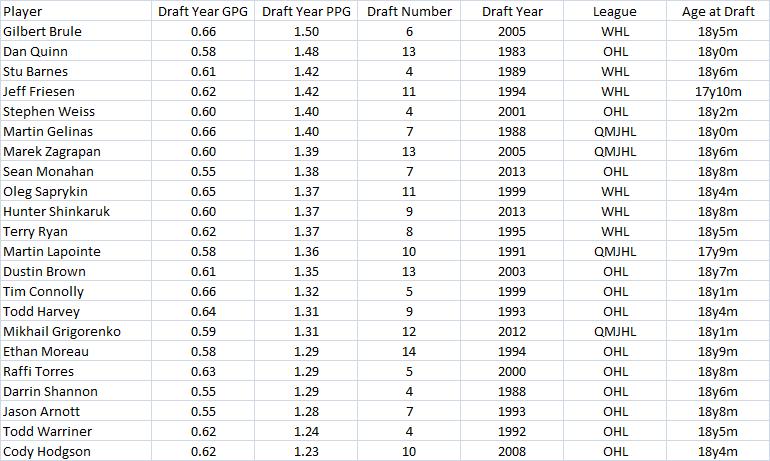 Excluding Shinkaruk and Monahan, that's twenty players over the last thirty years, and although there's some variety, the range of outcomes also has some consistency. Of the players drafted after 2008, 15 of 19 have played in at least 400 regular season games, but very few would have ever been considered star offensive players. In the chart below, I've listed each player's number of regular season games and his career points per game. Players who were listed at 5'11'' or less are highlighted in blue: 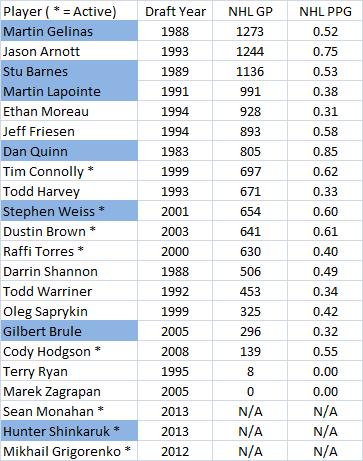 The most probable outcome for Shinkaruk looks to be a middle six NHL forward who might play on the top line so long as someone else is driving the bus. Size doesn't seem to have a negative impact, though it should be noted that most of the smaller players listed were drafted in the 80s or early 90s.

Now let's get back to that regression in offensive production from 2011-12. We know already that showing just a small amount of improvement offensively isn't a big deal so long as the results are consistently good. But that's not quite the same thing as actually getting worse. None of the players in that original study had worse results in their draft year than they did the year before, and just one guy improved less than 10%: Rob Schremp. The only other player I can think of off the top of my head who regressed offensively in the CHL and was drafted in the first round is Angelo Esposito, which... yikes.

Shinkaruk brings more offense than either Schremp or Esposito did when they were drafted, and it's quite possible that a slight regression in offense doesn't actually matter. But given that Shinkaruk's likely outcome if it doesn't matter is good-but-not-great and his likely outcome if it does is something less than that, the uncertainty is going to push him down my list.

Next up tomorrow afternoon: Rasmus Ristolainen