The Relative Importance of Forwards and Defensemen for Shot Attempt Differential

Share All sharing options for: The Relative Importance of Forwards and Defensemen for Shot Attempt Differential

Most of the folks reading my work are probably already familiar with Tyler Dellow, but if you aren't, or if you are but haven't visited his site recently, you'll want to read the work that he's done over the last couple of weeks dissecting shot attempts in Oiler games this season (Part 1; Part 2; Part 3; Part 4; Part 5).

Tyler began that series trying to figure out why the Oilers were so much worse in 5-on-5 Shot Attempt Differential in 2012-13 than they were in 2011-12, but his research is clearly going to have much wider application. This article will deal with one of the many claims he makes in that article, namely what Tyler says about the relative importance of forwards and defensemen on Shot Attempt Differential. Tyler voices his position on this issue in the third article of his series:

Intuitively, that makes a certain amount of sense. It also suggests to me that, on the Oilers at least, the forwards are the ones who drive the SAF volume, not the defencemen. I suspect that this is a principle of more general application, subject to some exceptions.

But it's not just Shot Attempts For where the forwards are driving results. In the second of his articles, Tyler also had this to say about Shot Attempts Against, which had particular application to shifts with just one Shot Attempt Against:

I’m not entirely convinced that defencemen are able to exercise a great deal of control over the number of shifts that they play on which the other team gets possession and is able to attack.

That doesn't leave a lot of room for defensemen to have an impact on the game. So is it true that forwards are much more important than defensemen in driving shot differential? I'm not convinced. If a larger spread from best to worst is what we'd expect if forwards have a larger impact on most shot attempts, that larger spread should also be present in overall shot attempt differential. In the table below, which uses data from the 2011-12 season from Behind the Net, you'll see that's exactly what we find (the numbers are 5-on-5 Shot Attempt Differential per 60 Minutes): 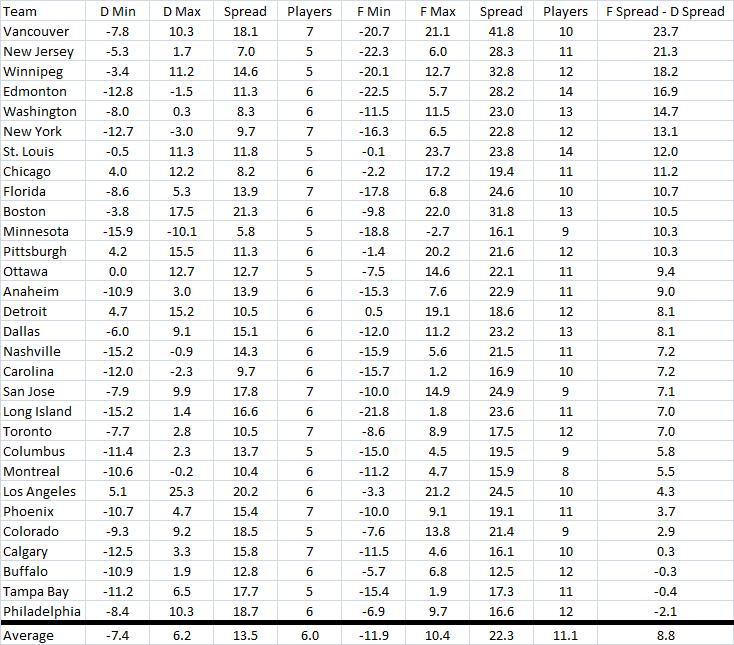 In terms of results, the general pattern of a larger gap for forwards is present. That said, the Oilers have one of the larger differences between forwards and defensemen. Since Tyler's research is focused on the Oilers, it's important to know that what we're seeing there isn't really representative of the league as a whole. One more obvious observation is that there are approximately twice as many regular forwards in the league as defensemen, and it would be interesting to know how much the greater spread is the result of that larger sample.

But before getting to that question, another thing I noticed is that one of the teams ahead of the Oilers here is the Vancouver Canucks, a club notorious for its specialized use of various forwards. In Vancouver, some forwards took over 75% of their end-zone faceoffs in the offensive zone, while others took less than 25% of their end-zone faceoffs in the offensive zone. The disparity isn't nearly that large when we look at Vancouver's defensemen. I bring this up because we know that Zone Starts have a pretty strong relationship with shot attempt differential. Noticing this with Vancouver, I decided to see whether a more extreme spread for forwards than defensemen was typical of NHL teams during the 2011-12 season (the numbers are the percentage of end-zone faceoffs taken in the offensive zone): 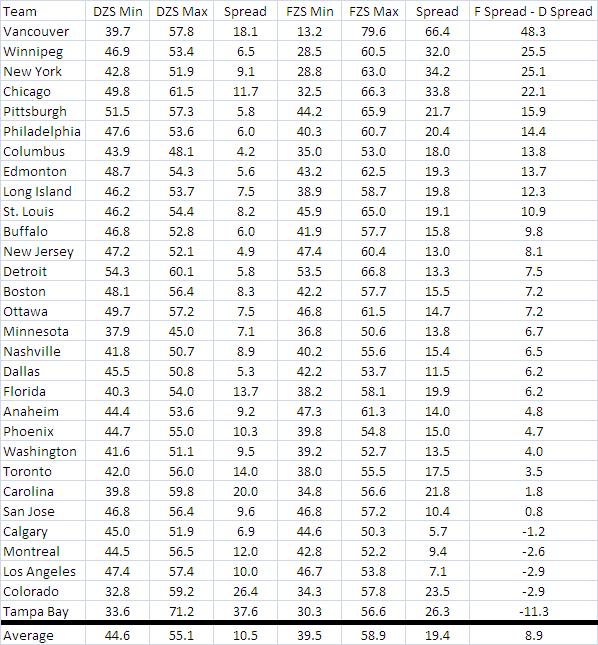 As you can see, the larger spread for forwards is, in fact, typical. This disparity should explain a good amount of the difference in spread we see in forwards and defensemen with regard to Shot Attempt Differential. In other words, without first accounting for Zone Starts in some way, I don't think the data Tyler has provided can lead us to draw conclusions about the relative impact of forwards and defensemen.

Unfortunately, the research in how to do this adjustment is not uniform. Since Eric's review (which highlighted some of the different methodologies), David Johnson and Tyler Dellow (yes, again) have both published work on Zone Starts, but the results suggest very different adjustments. As a result, I'm not really prepared to take the next natural step in this analysis right now and adjust the Shot Attempt Differential totals for Zone Starts. In his last article, Tyler suggested one possible way forward in this research:

One of the things that increasingly bothers me in thinking about Zone Start is that it's entirely possible that we should be allowing for the outcome of the faceoff in considering adjustments. It's not the fact of the defensive zone faceoff itself that's the suspected Corsi killer; it's the losing of the faceoff.

It's likely going to take some time to organize the data, but it seems to me that taking up this line of thinking would be a good step forward in teasing out the relative importance of forwards and defensemen for the creation of Shot Attempt Differential.