The Oklahoma City Barons are an offensive juggernaut so far during the AHL playoffs. Through ten playoff games, the club has scored an average of 4.2 goals per game and has generated an average of 33.4 shots per game against two of the best teams in the AHL. Mark Arcobello leads the AHL in playoff goals and points, and Toni Rajala leads the AHL in playoff shots. Both of those players are of interest for Oiler fans, but Rajala probably has a better chance for an extended NHL career just because of his age (he turned 22 at the end of March).

When I last wrote about Rajala, I described his 170 regular season shots in 51 games as "very impressive" but I made that assessment without any kind of rigorous look at data to back it up. Given that fact, I decided to take a closer look at Rajala's shot rate in the context of the AHL as a whole. The first step in that process was identifying this year's shot leaders among forwards (minimum of 120 shots; Barons highlighted in blue; players 22 years old or younger highlighted in orange): 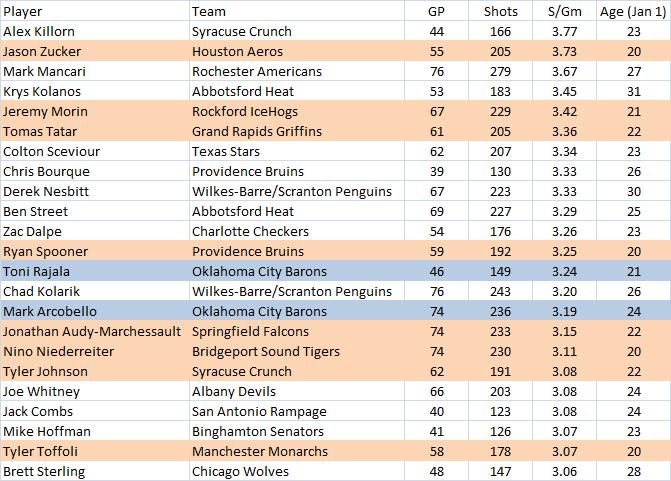 Thirteenth in the league isn't too shabby at all, and Rajala finishes fifth among guys young enough to be considered legitimate prospects. So that's encouraging, but it still doesn't really tell us whether or not Rajala is on track to find his way to the NHL. In order to better answer that question, I decided to look at all of the players who were able to generate at least three shots per game at age 22 or younger starting in 2006-07. 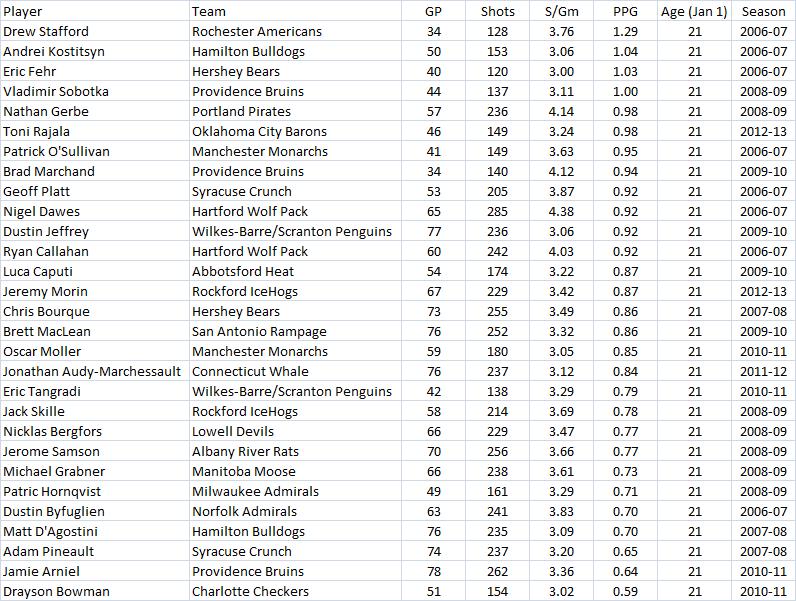 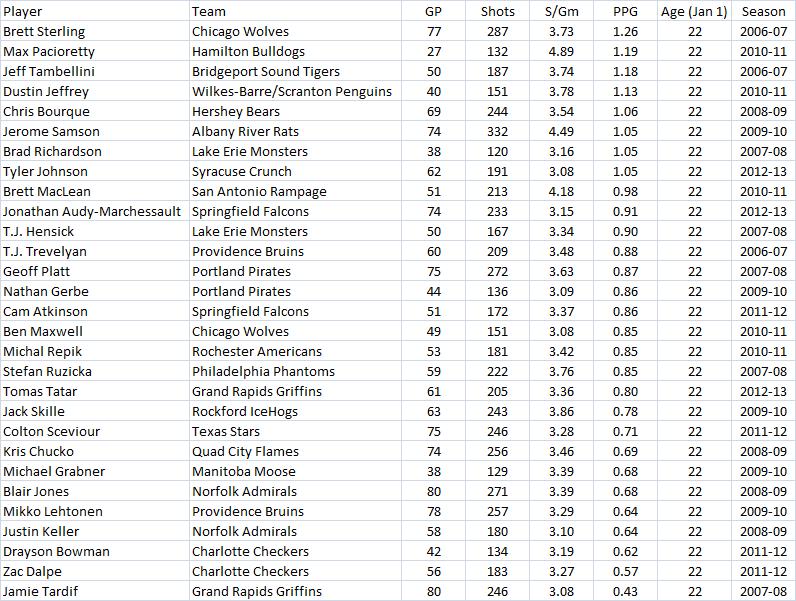 I think this list offers a pretty fair assessment of where Rajala is at the end of this season. He's still not a sure thing, but there are a lot of quality NHL players on this list, and every other 21-year-old listed has played at least one game in the NHL. Given Rajala's outstanding playoff performance, we're at the point where Rajala is very likely to get at least a cup of coffee in the NHL, and may yet turn into something more. Given that Rajala spent most of the first part of this season in the ECHL, that's a tremendous accomplishment.

Of course, Rajala's season isn't done quite yet. After beating the Texas Stars, the Barons will now face Grand Rapids in the Conference Finals, where I think they have an excellent chance to win. The Griffins are actually a step back from Texas in terms of regular season shot differential, outshooting their opponents by an average of 2.8 shots per game (30.7 to 27.9). They played just sixteen games against the best teams in the Conference -- Charlotte, Oklahoma City, Texas and Toronto -- and while their shooting numbers were pretty similar (they outshot opponents by 2.4 shots per game in those sixteen games) they had a pretty poor regulation record of 5-8-3 and a regulation goal differential of -7 (+43 -50). Those last two stats are significantly worse than OKC (13-8-5 and +7 in games against top opponents), and should provide Baron fans with some confidence.

The Barons probably also have the advantage in goal. Grand Rapids will be counting on Petr Mrazek, a rookie netminder who had a solid first season in the AHL, but doesn't have a long enough track record to give a good indication of his actual level of ability. Yann Danis, meanwhile, has a very long track record of quality play at the AHL level, and bounced back from a sub-par regular season to post a .935 save percentage through ten playoff games so far. The Barons also have the advantage of Detroit still being in the playoffs, and possibly needing to call on some players if they run into injuries. The Griffins' top scorer, Gustav Nyquist, is already in Detroit, and there could be more to come as the Red Wings continue their own playoff run.

Overall, I think the Barons are probably the favorite in this series despite not having home-ice advantage (the 2-3-2 series format helps to diminish the disadvantage there). If they're able to pull out the win, OKC will move on to the first Calder Cup final in team history, and the players will all move a step closer to employment in the NHL.