How Much Should Magnus Paajarvi Cost?

Share All sharing options for: How Much Should Magnus Paajarvi Cost?

A couple of weeks ago, I looked at what the Oilers need to do over the summer in order to make this team better. My list of necessary additions includes two new top four defensemen, one top nine forward, three depth forwards, one depth defenseman, and a backup goalie. That's a lot of shopping, and some of it will require spending a good chunk of money. Add that to the fact that Ryan Nugent-Hopkins, Nail Yakupov and Justin Schultz are going to be getting new contracts in the next couple of years, and it's obvious that the Oilers will need to be diligent in their management of the salary cap while making these additions.

One of the ways that salary cap caution should express itself is in the negotiations that the Oilers will have with players currently under team control. Magnus Paajarvi is one such player, and in the plan I laid out, I had the Oilers signing him to a two-year contract at a cap hit of $1.5M per season. The question is whether or not that figure is reasonable.

In order to answer that question, I decided to look for some comparable players and settled on the following criteria: all comparable players will have completed their entry-level contracts by age 22; will have played in at least 100 regular season NHL games over those three years; will have signed new contracts in the summer of 2008 or later; and will have a points per game mark between 0.29 and 0.43 (i.e. 80% to 120% of Paajarvi's point per game average) during their entry-level years. That criteria resulted in eighteen matches, two of whom also need new contracts this summer: 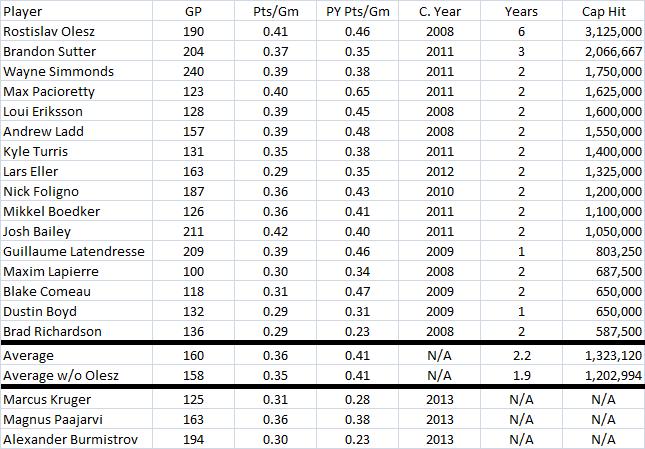 The fourth column on this chart indicates the player's points per game performance in his platform year (i.e. the year before he signed a new contract), which I've included because that's clearly going to have an impact on the player's next contract. The standard contract for this type of player is a two-year deal, and $1.5M doesn't look to have been a bad guess. It's not in the chart, but the average pay-out for contracts given out in 2011 and 2012 was about $1.47M, which is basically bang on. That said, the average of all of these contracts is about 12% less than $1.5M, and is about 20% less if you throw Rostislav Olesz out of the mix, which seems perfectly reasonable given that his contract clearly belongs in a different category. It probably makes sense, then, to set the bar a little bit lower in negotiations, say $1.2M over two years, giving the Oilers an extra $0.3M to spend somewhere else. That amount sounds trivial, but an extra $0.3M in wiggle room can make a big difference.

Finally, and I know that it's a bit beside the point of this article, looking over the list of players here is pretty encouraging. A lot of these guys are very good NHL players today, contributing to their teams in a much more significant way than they were when they signed their second contracts. Because of the success we've seen from players like Taylor Hall, Jordan Eberle, Ryan Nugent-Hopkins, and Nail Yakupov, it's easy to think of Paajarvi as a disappointment. In actual fact, he may just be developing at the pace of a quality NHL player instead of the pace of an NHL superstar.