Share All sharing options for: NHL Playoff Preview and Predictions - Second Round

The first round of the playoffs was absolutely splendid. I came away with a 6-2 record, but one of the two losers was Vancouver being swept, and an Oiler fan living in Vancouver sure isn't going to complain about that. Plus, six correct guesses feels pretty good to me considering that the higher seed won just three times. That brings my total since 2009 to 42-26 compared to a 35-33 record for the teams with home ice advantage. That's a surprisingly dismal result for teams who would generally be considered the favorites, but my gut tells me that the favorites are going to be favored for a reason in the second round.

Fortunately for me, it's not just my gut telling me this; it's also some pretty important numbers. In the following chart, I've sorted the remaining playoff teams by their regular season regulation record and goal differential against other playoff teams:

Note that, unlike in the first round, the top four remaining teams on this chart are also the top four remaining seeds, and that in three of the four match-ups there's a substantial gap in goal differential. Some of the other statistics don't make these series look quite as one-sided, but this first chart points in a pretty clear direction.

In the next table, I'll look at some key statistical categories for each of these match-ups: full regular season data for 5-on-4 shot differential, 4-on-5 shot differential, and Fenwick percentage (shots for + missed shots for / total shots + total missed shots) with the score tied, plus the starting goaltender's even strength save percentage over the last four seasons combined (regular season and playoffs). The goalies I've picked as starters are Corey Crawford, Jimmy Howard, Antti Niemi, Jonathan Quick, Tomas Vokoun, Craig Anderson, Henrik Lundqvist and Tuukka Rask. Here's how the match-ups look: 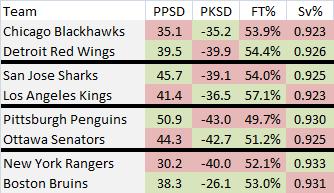 Chicago in Six: This looks like a really close series to me, but I've given the edge to Chicago because I think they've got superior depth at all positions. Chicago looks like they'll have Dave Bolland back, which should help them handle the two-pronged assault of Pavel Datsyuk and Henrik Zetterberg much better. Mike Babcock chose to make Cory Emmerton a healthy scratch in Game Seven against the Ducks, and went with three centers rotating through four lines. If he keeps that strategy up, it might help to get him some mismatches for Datsyuk and Zetterberg, but it's a strategy that betrays a lack of good options up the middle. I think Chicago's better depth on defense (so long as they don't have to go beyond their top six guys) will also be a distinct advantage. Mike Babcock was forced to make some lineup changes at the bottom of the order as a result of Danny DeKeyser's injury, and the Ducks were able to carry the play more often than not when Detroit's third pairing was out there. That problem is likely going to be made worse with against a much better Chicago team.

Los Angeles in Five: The Kings have a fantastic group of forwards, and it's their ability to create three really formidable lines that I think gives them the edge against San Jose. The Sharks can create two really fantastic lines, but even late in the game, most teams are forced to use nine forwards, and that gives L.A. a big advantage. Against Vancouver, the Sharks had one really solid line with Torres, Marleau, and Couture playing together, but were counting on Joe Thornton and Joe Pavelski to carry less worthy linemates (Galiardi/Burns and Wingels/Desjardins respectively) to form the rest of their top nine. The Kings, by contrast, can have a monster top six (Brown/Kopitar/Williams and King/Richards/Carter) and still ice a very respectable third line that includes both Jarret Stoll and Dustin Penner. That kind of superior forward depth helped the Kings to the best to the best shot attempt ratio in the NHL with the score tied during the regular season, and I think it will continue to serve them well here.

Pittsburgh in Six: In my last preview I noted that Marc-Andre Fleury could lose three games to the Islanders all by himself. He did nothing to prove me wrong in that first round series, but thankfully, Dan Bylsma did. And now that Tomas Vokoun has made his way between the pipes, I think Pittsburgh's got an excellent chance to get through the Eastern Conference. The Senators were much better than I was expecting against Montreal, and the Alfredsson/Turris duo in particular was surprisingly effective. Of course, one of the reasons they were so effective was Brian Gionta's absence from the lineup in the last three games of the series. I have a hard time seeing Alfredsson and Turris being quite that dominant against either Sidney Crosby or Evegeni Malkin, and if the Senators try to keep Turris away from those two, he'll almost certainly still have to deal with a very tough Brandon Sutter while leaving two other lines to get absolutely crushed. The Senators are counting on a lot of very young players here against a couple of true superstars in their prime. Without the big advantage in goal that Craig Anderson would have provided over Fleury, I don't see any likely path to victory for Ottawa.

Boston in Seven: That Boston-Toronto series reminded me of this great clip:

Man, that last game was entertaining. The Bruins shouldn't, of course, have been in that position. Boston is a good team, and the Leafs were a mirage, so I was befuddled the series lasted as long as it did. In the end, Boston moved on, and I think they should be able to get by the Rangers too, but New York is a much stronger opponent. The Rangers are just a little bit worse in all of the team categories I've identified above, and Henrik Lundqivst's advantage in goal is pretty marginal compared to Tuukka Rask. Furthermore, the Bruins were a much more successful team against fellow playoff teams than New York. I do think this is the closest of the four series, but ultimately, I think Boston's best players, Patrice Bergeron and Zdeno Chara, will be able to do a better job of controlling the game than anyone playing for New York.