Andrew Raycroft Is The Worst

The Not-So-Sweet Sixteen has a new champion.

Share All sharing options for: Andrew Raycroft Is The Worst

The final wasn't quite as thrilling as Louisville's victory over Michigan last night, but the feeling of satisfaction in the hearts of Leafs' fans (who followed this tournament) is perhaps just as great. It was by far Andrew Raycroft's closest contest, but in the end, his "fans" pushed him past top seed Craig Billington 63-54, and in doing so, helped him to join Rick DiPietro (worst contract) and Don Waddell (worst GM: 2005-2012) as Not-So-Sweet Sixteen tournament winners. Raycroft also becomes the first winner not to be seeded first, making his victory something of an underdog story; much like he did in the summers when he signed a new contract, Raycroft was able to overcome logic and good sense, pushing out a more deserving goaltender in the process.

And what did we learn? Despite Raycroft's victory, I learned that teams seem to be at least marginally better at sussing out goaltending talent now than they were in the 80's. None of the modern contenders had a rap sheet like semi-finalists Jacques Cloutier or Alain Chevrier where the bad was just relentlessly consistent. Of course, things aren't that much better. Raycroft, of course, won the tournament and he was in the league just last season, while ninth seed, Steve Mason, was traded for something of value at the deadline and signed to a new contract for over two times the minimum NHL salary. Depending on how he performs, Mason might eventually give Raycroft a run for his money in this category, especially if he has a stint with the Leafs.

This tournament was set to determine the worst goaltender in the National Hockey League since expansion to 21 teams in 1979. Ty Conklin was the best that the Oilers could produce, and despite a terrible moment or two, he just didn't have the stuff to overcome the top contenders. Andrew Raycroft did, and for that, we can now call him champion. 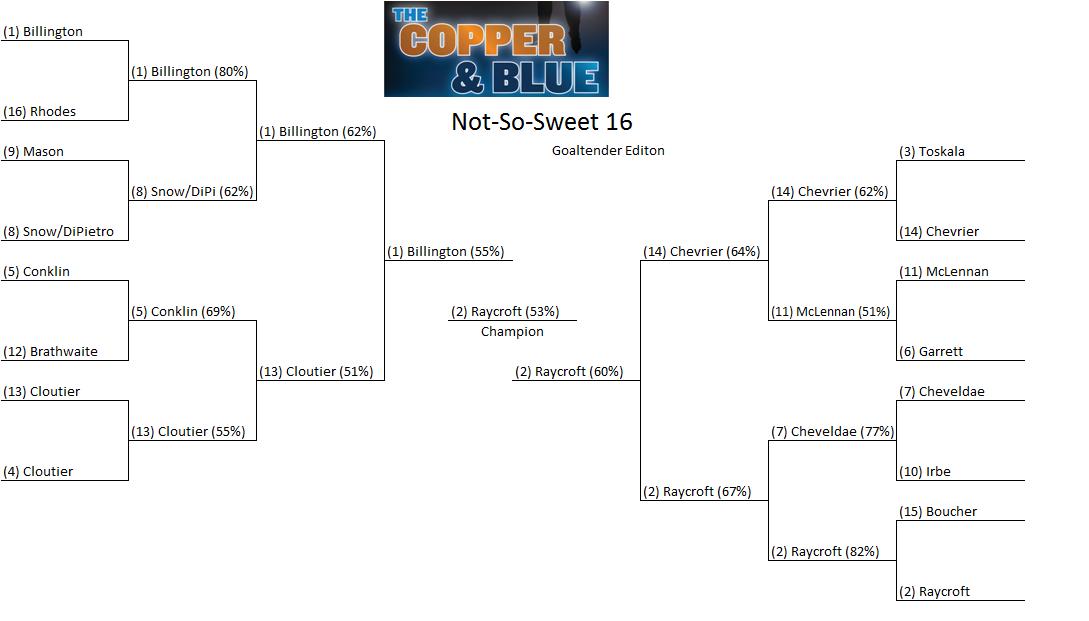