The Edmonton Oilers are still a very bad team.

People seem to be feeling pretty optimistic about the Edmonton Oilers these days. It's understandable. The Edmonton Oilers are just two points back of the final playoff spot with just one team in front of them (Detroit) and only eleven games to go. After three consecutive seasons of being out of the race, people want to think that this team has a chance. Steve Tambellini sure does, which is why he didn't move any bodies out at the trade deadline (a poor decision, in my view). The problem is, their chance really isn't very good. And I'm not talking about 27.4% not being a very good chance (though it's not). I'm talking about the fact that their chance of making the playoffs is probably much worse than that.

This team has problems, and one of those problems is that they get outshot so very badly. The Oilers are currently dead last in the NHL by a wide margin with a shot differential of -5.5 per game. Shots aren't goals, of course, but teams that get outshot that badly are generally very bad teams. Below, I've compiled a chart that lists all of teams that have been outshot by at least 4.5 shots per game since the NHL expanded to 30 teams for the 2000-01 season with all of the playoff teams highlighted in blue: 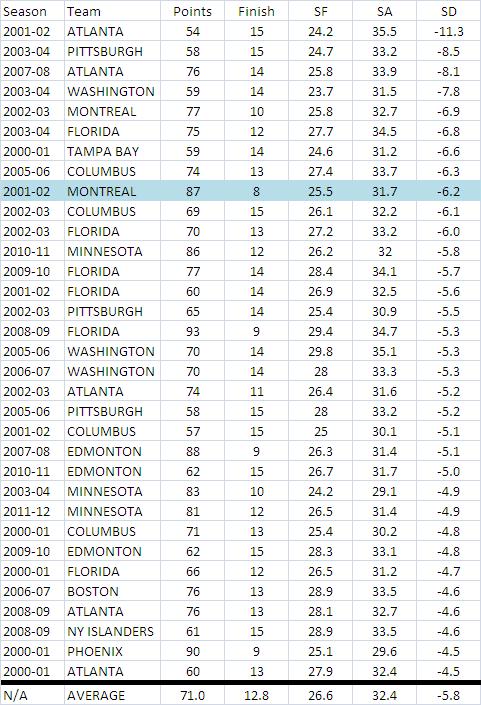 Hilariously, Montreal won their first-round playoff series in 2002. This was also the year that Jose Theodore won both the Hart and Vezina trophies, the only time since the expansion to thirty teams that a player has won without his team finishing top five in the Conference. That guy had a pretty good season.

Less hilariously, once this season is in the books, the Oilers will likely be on this list four times. There are three other organizations on this list at least four times: the Columbus Blue Jackets (4), the Atlanta Thrashers (5), and the Florida Panthers (6). Let that sink in for a second. Blue Jackets. Thrashers. Panthers. Oilers.

But let's not stray too far away from the general pattern to be observed by looking at these individual seasons. It's pretty clear: these teams all suck. They are all awful teams, including the one (of thirty-three) that made the playoffs on the back of ridiculous goaltending. Could the Oilers be the second team in this group to make it in? Sure, the 48-game schedule is a big help in this regard. Of course, that doesn't mean they're any good. In fact, whether they make it or not, this team is still really, really bad. We couldn't say that to a fan of the 2011-12 Minnesota Wild 37 games into last season without expecting scorn. I can only hope, dear readers, that we can say it to you.