Share All sharing options for: NHL Playoff Preview and Predictions - First Round

Making predictions is fun. With the sudden start to the season this year, I didn't make the time for a set of regular season predictions, but the playoffs present another opportunity for making educated guesses (emphasis on guesses), and I'm more than happy to take advantage! Since I started making public predictions in 2009, I have a 36-24 record, which is a little bit better than my control system of always picking the team with home ice advantage (that system clocks in at 33-27). Of course, my record should improve by June since I plan on being perfect this year.

To help in that endeavor, let's first look at how these playoff teams performed against other playoff teams. If you were running up goal differential by beating on teams like Edmonton (I'm looking at you Minneso... wait... the Oilers won 6-1!?), that's not particularly transferable to the playoffs. Another thing that isn't particularly transferable to playoff hockey is being really good at 4-on-4 or in shoot-outs, which is why these standings have a column for ties and include goals from regulation time only. Let's start with the Western Conference, sorted by goal differential:

The Chicago Blackhawks look really good by this measure and the Minnesota Wild look really bad. So that's one series down. The surprises (at least for me) are Anaheim and St. Louis. The Blues' had goaltending problems, and you never know when a poor goaltender like Brian Elliott is going to suddenly get consideration for the Vezina, so it's not like they're a team without hope. The Ducks are just a better team than I had expected, though Detroit isn't an easy draw.

And now the Eastern Conference:

Pittsburgh is fantastic; Washington is pathetic. The Capitals didn't win a game against a playoff team until they beat Montreal on April 9th, which is less than a month ago. The Rangers don't exactly look fantastic by this measure, but boy oh boy, Washington looks awful. The other surprises for me are Boston (I thought they'd be a bit better) and Toronto (I thought they'd be much worse). 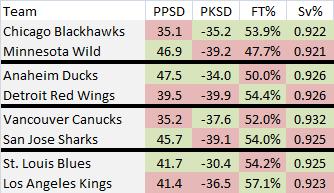 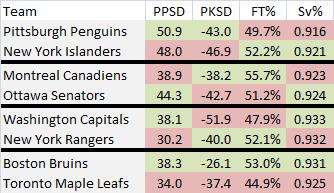 Chicago in Four: This is the best team in the West against the worst one, so I don't expect much drama. The only area where Minnesota seems a little better is on the power play, but the Blackhawks have a stellar penalty killing unit, and they tend not to take a lot of penalties (fourth fewest times shorthanded in the league). Minnesota doesn't take many penalties either (fewest times shorthanded in the league), but a lot of five-on-five play probably doesn't help them a whole lot.

Detroit in Six: The Red Wings don't have as much depth as they've had in previous seasons, and that will get exposed down the road, but Datsyuk and Zetterberg should be able to outplay Anaheim's top six, and that should give Detroit the series. I was going to say that Hiller is the wildcard (and that's still true in that goaltending is always the wildcard), but I was surprised to see that Jimmy Howard has performed just as well over the last four seasons.

Vancouver in Seven: This is a very even series. Henrik Sedin and Joe Thornton are two of the best passers in the game, and both are running out of time to turn those skills into a Stanley Cup as a featured player. Alain Vigneault crept back on his extreme zone-starts for the Sedins this year (only 65% of starts in the OZ), but may go back to a more extreme split now that Ryan Kesler is healthy. Since the Sharks use their top guys in a power-vs-power role, that will mean either a lot of defensive zone time for them or a change in strategy. I'm going with the Canucks because I think they have the edge in goal, and that they'll have an easier time dictating bench strategy, but I wouldn't be surprised to see the Sharks go through.

Los Angeles in Five: The Blues have the edge in goal in my chart, but I'd rather have Quick than Halak for sure, and there's a pretty good chance that the Blues start Elliott, which would make the gap even larger. St. Louis has the kind of depth to give a lot of teams major problems, but the Kings are one of the few clubs who can match that depth (which is why they led the league in Fenwick Tied percentage) and they have the better top-end skill too.

Pittsburgh in Seven: The Penguins are an excellent team but Marc-Andre Fleury can lose three games on his own. Fleury's numbers have been good this year (this season is like a "what if the Penguins had a good goalie" thought experiment), but I just don't trust him. You'll notice that he's last with a bullet among the playoff starters, half a percentage point behind the next-worst netminder. I think the Penguins will end up being too much for the Islanders, but Fleury could ruin a whole bunch of hockey pools in the first round.

Montreal in Five: Brendan Gallagher, David Desharnais, and Max Pacioretty have been mauling the soft minutes all season, benefiting greatly from the work put in by players like Tomas Plekanec and Brian Gionta who are driving the puck into the right end of the ice. Plekanec and Gionta against Kyle Turris and Daniel Alfredsson is likely going to be the key match-up in the series, and my bet is that Plekanec and Gionta come out on top.

New York in Six: Washington hasn't been very good this year. They made the playoffs because they beat up the Southeast division, and that's just not all that impressive. They have an-ever-so-slight edge in goaltending in the chart, but Henrik Lundqvist's .932 is way more impressive than Braden Holtby's .933 because Lundqivst put his number together on a 6,304-shot sample compared to just 1,742 for Holtby.

Boston in Four: The gap in Fenwick percentage is almost comical. Boston is better by every measure I can think of. Except truculence. Maybe. Boston's pretty truculent.