Share All sharing options for: Worse Than District 5: Oilers Lose 5-1

Not really the start Craig MacTavish wanted for his first official game as GM of the Oilers, but it was a perfect microcosm of the Oilers season as a whole. The team played exactly like the team he described yesterday: Not enough NHL calibre players.

The game got off to a rough start as the Oilers made several defensive blunders to give the Wild a couple of odd man rushes that they failed to convert on. The Oilers luck turned sour in a hurry when Brodziak converted after a couple of terrible bounces, first off the pads of Dubnyk, then off the stick of Gagner, ended up on his stick. Nail Yakupov would get his own lucky bounce when he buried a Taylor Hall pass went into and out of the pants of former Oklahoma City Barons defenseman Brett Clark.

The next 30 minutes were a train wreck for the Oilers, as the Wild completely dominated the game. It started when Ralph Krueger left his 4th line on the ice for a defensive zone face-off against the Mikko Koivu, Zach Parise and Doesn't Matter Who Because The First Two Guys Are Good Enough To Not Leave Your Fourth Line Out Against line. The 4th line was out again When Mikael Granlund (who is 20) made Ryan Smyth (who is 200) chase him around the defensive zone for 40 seconds before tiring the left winger turned centre out and breaking free to bury a feed from Torrey Mitchell to basically salt the earth of the Tambellini reign.

Just to ensure I'd be miserable, Zach Parise scored a power play goal 20 seconds into the game after Smid partially blocked a shot heading right into the crest of Dubnyk. The puck deflected to Dubnyk's right and he was forced to go into scramble mode and couldn't keep the puck out of the net. Because the Hockey Gods haven't shit on us enough, Kyle "Traded Away By The Oilers for Peanuts" Brodziak scored his second goal of the game on breakaway to send the Tier 1 fans in Rexall home and the Tier 2 fans on Twitter up from the basements of their parents.

The Oilers would get to within a field goal as Taylor Hall did his best bull in a china shop impression by driving to the net from the corner and giving Horcoff the easiest goal of his career. Magnus Paajarvi finished the scoring by burying a Nail Yakupov rebound after the rookie undressed Ryan Suter. Score effects would lead Dan Tencer and other members of the Edmonton media to ask "Why couldn't they play like this earler?"

Leaving the Oilers 4th line out against the Wild's top line wasn't even the most bizarre decision by Krueger on the day. Quinn and Debrusk talked in the pre-game how coach Krueger broke up the first line to get them going because they weren't producing, which was odd because the only Oilers line who was generating anything during the losing streak was the kid line.

Despite dressing 4 centres, Ryan Smyth centred the 4th line because, according to Debrusk and Quinn, Krueger liked the energy and chemistry of the 4th line. The same 4th line who have basically been the equivalent of baby hands around a lollipop for opposing teams. Ultimately it wouldn't matter in the game, but why play a guy out of position when you don't have to?

How bad a sign is it when your key deadline acquisition can't even get into your lineup? Hell, the healthy scratches tonight were like a gallery of failed Tambellini acquisitions. Joining Jerred Smithson were Ryan Jones and Ryan Whitney were all in popcorn alley for the game tonight. Add backup goaltender Nikolai Khabibulin and that's a lot of veterans who aren't good enough to be regulars on a bad NHL team.

Sportsnet did a bit of foreshadowing with 10:38 left in the second period as their score graphic showed the Wild leading 5-1. I joked on Twitter and by halfway through the 3rd I wish I hadn't. 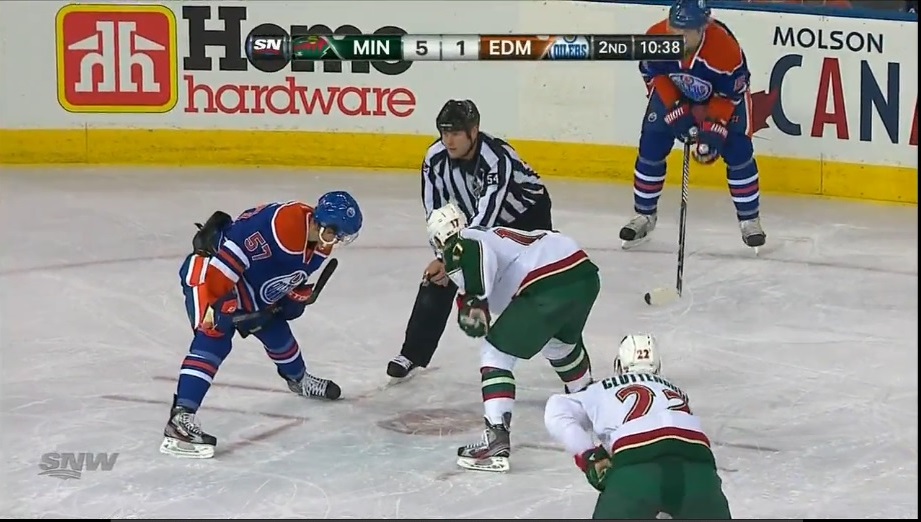