He's a veteran defencemen this team needed to rely on to have a chance to make the playoffs. It hasn't really gone as scripted.

Share All sharing options for: Ryan Whitney: A Graphical Exploration of Failure

Ryan Whitney's a likable enough fellow. He's the proud owner of a charming New England accent that would endear him to the entire cast of Good Will Hunting. He likes to rib his teammates on Twitter, even though a sizeable chunk of them were born after the introduction of Super Nintendo. He genuinely seems to not find Edmonton a deplorable place to live, difficult as it is to collect $5.5 million in salary this year.

He sits tenuously at the end of an Edmonton Oilers asset trail that began with Esa Tikkanen being selected in the 4th round of the 1983 Entry Draft and saw Doug Weight spend the meat of his prime seasons in the original Copper and Blue. He's also the only thing we have to show for shipping out just-before-their-primes Jarret Stoll and Matt Greene in order to 'win now'. There is understandably a lot riding on Whitney being a salvageable NHL player. Sadly, I think it's becoming increasingly clear that he's not a reliable NHL player anymore -- whatever was left of his hockey playing ability left with Gandalf to the Undying Lands during the seventh ending of Return of the King a long time ago.

A handy by-product of my efforts to count each game's even strength shot differential (Corsi) at Boys on the Bus is that at this point in the season, I can string them all together to see how a player's year has gone compared to his peers. Here are the general shot attempt statistics for the Oilers' six most-used defencemen.

You can see that of all defencemen, Whitney has the lowest Corsi percentage -- the Oilers only take 39.9% of all even strength shots when Whitney is on the ice. Despite being a pretty solid 5th in average even strength icetime per game, Whitney also has the lowest Corsi/Game ratio, allowing an average of 5.7 net shots against in each game he plays. His performance is clearly behind the 2nd to 5th place cluster of Smid, Petry, J. Schultz, and Potter.

This would be distressing enough if defencemen played on their own, but anyone he's played with has been infected with a degradation in play:

This is a list of any defenceman who has played more than 25 minutes with Whitney this season in zone-adjusted time and the Corsi percentages they experienced with and without him. Each player's percentages increased without Whitney, highlighted by +10% improvements by both Justin Schultz and Jeff Petry. Justin Schultz' time with Whitney coincided with a massive drop in his accumulated season averages -- if he had played the season without Whitney entirely, Justin would clearly have the 2nd highest Corsi percentages on the team.

Perhaps Whitney's season has just been torpedoed by a few bad games. Let's investigate his per game Corsi percentage ranks among the other defencemen to see how he's done relative to his peers:

Each game has 18 skaters dressed, so the first column is simply the average of each player's per game Corsi percentage ranks. Whitney's average game rank for his Corsi percentages is 11.3 out of 18 Oilers skaters, easily the worst among defencemen, and, in fact, only higher than Lennart Petrell (12.1), Ben Eager (12.1), Mike Brown (12.3), and Darcy Hordichuk (17.3) among all skaters.

I've also broken out the percentage of each player's games that they ranked in the top third of Oilers skaters and percentage of games they placed in the bottom third of skaters -- this is to get a sense of how many 'good' games relative to his teammates a player has versus how many 'bad' games he has. You can see that for Nick Schultz, his Corsi percentage is in the top third of skaters in 38% of his games played versus only 26% of his games played being in the bottom third, for a difference of +13%. Nick Schultz has a fair amount more good games than bad games.

Let's have a look at how the Oilers defencemen have done on a game by game basis: 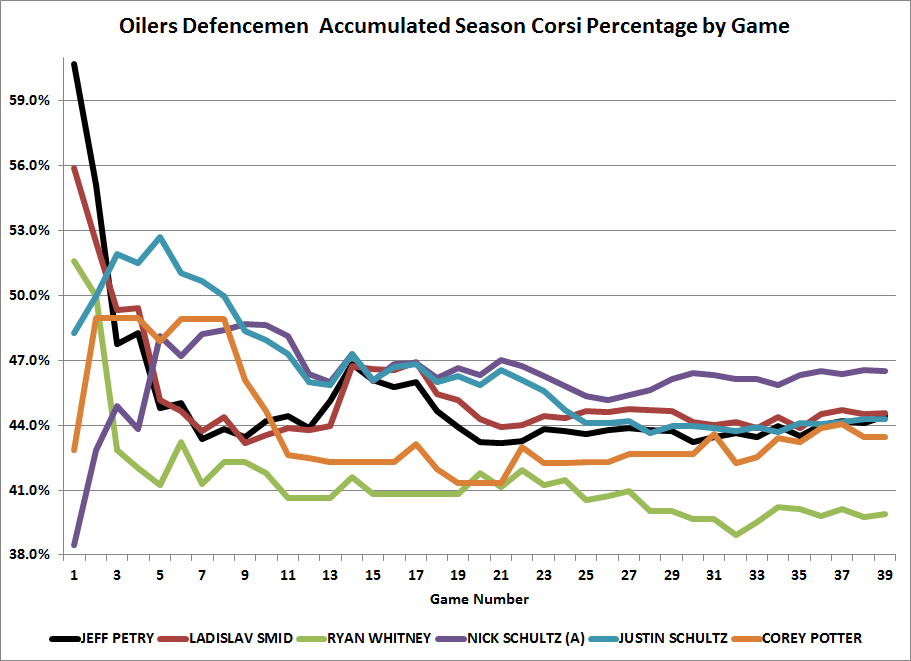 This chart shows how each player's season-to-date Corsi percentage has evolved from Game 1 to the present (Game 39). Ryan Whitney is the green line -- you can see that since a decent start, he's been firmly ensconced at the bottom of the pack of the regular defencemen. He's currently well behind the Potter, Smid, Petry, J. Schultz pack, nevermind the clear leader Nick Schultz.

Most interesting to me on this chart is how Whitney's green line and J. Schultz's blue line take concurrent nose dives between games 21 and 28 -- this was the period they played together. This period almost perfectly depicts the point where Justin Schultz went from mirroring Nick Schultz's performance to being kicked into a lower gear for the remainder of the year. J. Schultz has never recovered his season from his time with Whitney, as if he's seen a scary movie and can't get the horrific images out of his mind.

What if we take a 5 game moving average to get a sense of each player's trends throughout the year? 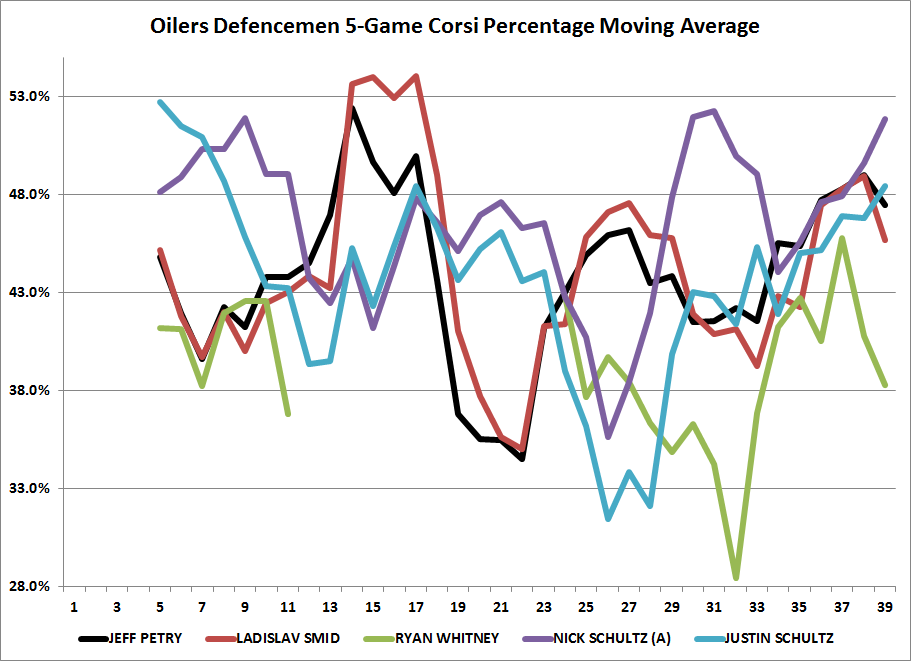 Here you see large portions of Whitney's season being unavailable because of all the healthy scratches halfway through, but what is available paints of a picture of a player who's had incredible problems sustaining any 5-game stretches of passable play. His only stretch above 43% happened during the recent winning streak, and has since tanked to be well below any of the other regular defencemen. That he could have any 5-game stretch that averaged near 28% of Corsi events should scare the hell out of any management team. That's the kind of play that should be sounding alarm bells -- and it happened well in advance of the trade deadline.

And I suppose that's the underlying point of all this. Ryan Whitney has not played like an NHL player this season. I've only analyzed his even strength attributes here, but I'd suspect it would be incredibly difficult for the marginal excellence of his power-play abilities to outweigh the deficiencies he shows at evens. I mean, if that's the only argument to keep him on the team, why wouldn't you consider him to be approximately equal in value to Marc-Andre Bergeron? Instead, we've heard rumours that the Oilers are considering signing him to a 3 year extension at $3.25M per season. Is this because they're afraid of losing the last in the line of Tikkanen for nothing? That would be a touching nod to history, but not the kind of asset management that a winning team would employ. Whitney plays hockey poorly. He makes his teammates worse and does not deserve to take a regular shift anymore. The Oilers would be a better team if Theo Peckham took his spot. Hell, they'd probably be a better team if Esa Tikkanen took his spot.