"Do You Hear the People Sing, Singing a Song of Angry Men..."

The soft whisper of the minority that have been calling for the job of Steve Tamebellini has begun to grow into a roar as they are joined by more and more who have begun to cast light on the failures of Oiler management.

Share All sharing options for: "Do You Hear the People Sing, Singing a Song of Angry Men..."

Even though I would wager there is not a great deal of crossover between NHL hockey fans and those who enjoy Broadway musicals, I don't think it is a stretch to believe that most of those who read this will recognize the title of this article as coming from "Les Miserables". I don't want to come across as pretentious in this article, but my wife is a big musical fan and there are a number of lines in this song that fit the current sentiment of the Oiler fan base, so, here we are...let's just go with it.

It should come as no secret to regular readers of this site that there are no fans of the Oilers' current management team among the current contributors to Copper & Blue.

In fact, many among us have been been calling for the dismissal of GM Steve Tambellini for months, if not years. For those of you who haven't clicked on that most recent link, it is to a post I wrote almost exactly a year ago where I stated that I had reached my breaking point with the Tambellini era in Edmonton. Needless to say, at this point I'm so far over that line that I can't see it anymore.

The unfortunate thing for those of us that have long held this opinion is that we have formed a very significant minority. The fanbase has shown near infinite patience with this group under the guise of the notorious "rebuild" while the mainstream media that reports on the team has remained focused on the future potential of the team's individual assets without holding anyone's feet to the fire as the Oilers continue to toil at the bottom of the overall NHL standings. It appears that may be beginning to change...

"Will you join in our crusade? Who will be strong and stand with me?"

The "road trip from hell" has lived up to it's name in every possible fashion. After starting well enough by being lucky enough to earn a point against the nearly unstoppable Blackhawks and getting a win against Dallas, the team has lost it's last five games, earning only a single point in the process. During that time, they have been able to amass a number of significant low points including going an entire period against the Minnesota Wild without registering a single shot on goal, being thoroughly dominated by the basement dwelling Columbus Blue Jackets (who have now moved past them in the standings), and being shut out in back-to-back games. Needless to say the growing unrest among the fanbase is reaching a fevered pitch with the team once again descending to the very bottom of the Western Conference and a tie for 29th overall.

Beyond the sentiment of the team's fans, which tends to ebb and flow with the strength of the team's performance from week-to-week, the sentiment that the time for change has arrived has begun to spread within the community of those who cover the Oilers.

During the third period of the embarrassing loss to the Predators on Friday night, I half-jokingly made the following comment in the Copper & Blue game thread.

"I think there needs to be a call that goes out to all Oiler bloggers and non-MSM types tonight to suggest that each and everyone one of them publish an article tomorrow morning calling for the job of Steve Tambellini.

We need some sort of bat signal, perhaps a flood light that shines a picture in the sky of a guy sitting at a computer in his mother’s basement.

If C&B, OilersNation, Boys on the Bus, Oil on Whyte, Lowetide, etc., etc., etc. all did so on the same day…would it make enough noise to get noticed by the Edmonton media?

I tend to doubt it, but really if I lived in Edmonton, I’d be standing on Whyte Ave. organizing a coup. People should try to do something. This cannot be allowed to continue."

While there was some discussion about the possibility of executing such an effort, it eventually got left behind...except that it didn't.

It almost certainly had nothing to do with the comment above, but something is happening nonetheless, even though it hasn't all come together on the same day.

There have already been a few stories relating to the approaching end of days for Tambellini as Oilers GM (and hopefully many others with him). Former beat reporter Robin Brownlee posted a story intimating that the time is up for the current management group earlier this week. Oil on Whyte's Jeff Chapman posted an excellent article of his own on Friday night that made the point pretty directly right in it's title: "Fire Steve Tambellini". Once again earlier today, our own Derek Zona surmised that "It's Time". I would link to a specific story from Tyler Dellow at mc79hockey about his repeated skewering's of the Oilers' Management team, but I don't know how to choose just one. Plus, I don't have to as he has branded his entire site in a way that makes his opinion of Steve Tambellini very clear.

Perhaps even better in terms of raising the profile of the discussion of Tambellini's future (or lack thereof) with the Oilers is that some more mainstream media outlets are starting to mention the issue. Jonathan Willis has certainly been vocal in his lack of approval for many of the team's decisions in the past, but got right to the point earlier today by suggesting that the current management group should pay the price for the their inability to assemble a team capable of improving their placement in the standings. That article by Willis is a perfect accounting of the reasons to support the dismissal of Tambellini & Co. simply for decisions made over the last year, let alone their past wrongdoings. It also correlates very closely with an article I wrote last July pointing out the ways in which the Oilers should act to mitigate the potential risks on their current roster. Looking back, they did almost none of the things suggested in the article and almost all of those missed opportunities have come back to haunt them.

Even some of the true mainstream media have begun to at least hint at the possibility of Tambellini's days being numbered. After Friday night's debacle, Damien Cox tweeted the following:

Just a brutal night for Alberta's NHL squads.Whoa.Both may soon be under new management.

I'm not what you would call a huge fan of Damian Cox, but a media personality with his level of exposure commenting that change may be needed in Edmonton is progress.

"Join in the fight that will give you the right to be free!" 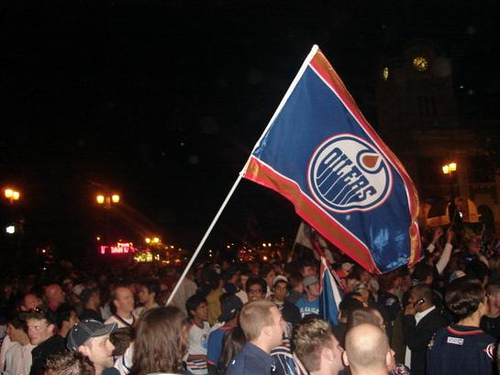 So, the whispers of the few have begun getting louder. I encourage you to join in. Already today, two of our readers have had stories posted on our home page where they have expressed their displeasure with the way their beloved team is being operated.

I encourage more of you to do the same, at this site and at others. Make noise however you see fit. Call in to one of Edmonton's many radio shows dedicated to the Oilers and call for the GM's job on the air, send messages through social media, any way (within the law of course) you can think of to express that you will no longer tolerate this degree of incompetence at the head of what was once one of the NHL's proudest franchises.

"Beyond the barricade is there a world you long to see?"

The one thing that can absolutely be said is that the continued poor performance of the team as a result of it's mismanagement has allowed the Oilers to amass a number of assets that have value. The key now is to get the right people in place to make the decisions necessary to turn a bunch of pieces into a finished puzzle. Surely Oiler fans don't want to part with any of their young talent, but by now the thought should have at least entered your minds that it may take moving significant assets in order to bring in some of what is needed to turn this team into a contender. The Oilers have enough depth in some areas to deal from a position of strength to get the players they need to address their weaknesses. Furthermore, many holes can be filled through trades, UFA signings, not to mention strategically choosing to NOT re-sign certain current players. Can this team allow Steve Tambellini another opportunity to repeat his past mistakes?

Imagine what an actual effective GM could do with some of the tools at his disposal in Edmonton? That thought alone should make you long for a future without Tambellini and Kevin Lowe.

It is my sincere hope that the voice of dissension will continue to grow in the coming days and that if this team loses the final two games of their road trip, by the time they return to Edmonton the call for change will reach a deafening roar. With the April 3rd trade deadline less than a month away, this team should not allow another significant opportunity for GMs to address the needs of their team to be left in the hands of it's current General Manager.

I leave you with one final quote from Les Mis, and I hope for the sake of Oiler fans everywhere that you get to experience it's sentiment sooner than later...

"There is a life about to start when tomorrow comes!"

1 - More fuel has been added to the fire today as Rob Tychowski tweeted the following critcism of Oiler management:

If Katz held the people who run his team as accountable as he holds his fans (taxpayers), Oilers might be in a better place

2 - The always entertaining and very knowledgeable Bruce Arthur provided some excellent analysis of the Oilers' management team today on TSN's The Reporters. Bruce McCurdy provides a write-up and analysis here. This is another great example of the criticism reaching the mainstream media.