At least nobody was seriously injured...that's the best that can be said.

The Edmonton Oilers' Performance against the Detroit Red Wings tonight was simply abhorrent.

For fans who missed some or all of this revolting display of NHL "hockey" perpetrated by the Oilers of Edmonton on this night, allow me to re-create a similar experience for you...

For our male readers, imagine getting kicked in the groin. HARD. No...I don't think you understand. Not just an unpleasing knock to the nether-region, but a professional footballer hauling off and toe-punting your scrotum. Then, imagine that the individual that committed this heinous act immediately dropped to their knees and did their best Mike Tyson impression by using your testicles as a speed bag. Finally, imagine that after collapsing to the ground in a fit of agony that this individual then proceeded to step on the same affected area and twist their foot as if they were snuffing out a cigarette on the pavement. (This may not hit home with the same impact for our female readers, but I think you get the idea.)

While I have thankfully never experienced such an event, I have to believe that it may only be marginally more painful than what I experienced tonight watching the Oilers ply their craft in Hockeytown.
For those with sado-masochistic tendencies, here are your game highlights:
Possession Report via Boys on the Bus
The few positives on this night were some decent play by goaltender Devan Dubnyk and a very solid first period by the trio of Magnus Paajarvi - Sam Gagner - Jordan Eberle before the coach inexplicably split them up in order to put together random combinations of players over the last 40 minutes.
On the opposite end of the spectrum, perhaps the piece de resistance was an utterly appalling series by the line of Ryan Smyth - Eric Belanger - Mike Brown where they did their best impression of the infamous incident known simply as "The Shift". Over the course of one uninterrupted sequence, the Oilers attempted to see if it was possible to allow every player on the Red Wings' bench to rotate through a shift without a whistle or having the puck leave the Oiler zone.
I officially lost my patience with this season following the loss to the Minnesota Wild this past Sunday, but if you had held out hope until tonight, hopefully this "effort" was the equivalent of Steve Tambellini and Ralph Krueger telling you there is no such thing as Santa Claus...because they killed him. 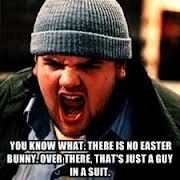 The Oilers are now two-thirds of the way through their 9-game road trip (the same road trip where Derek Zona correctly surmised that in order to remain in the playoff hunt, the Oilers would likely need to amass 11-12 of a possible 18 points) and have earned exactly one win and four points in the standings with three games remaining. The same road trip that has seen Magnus Paajarvi scratched on multiple occasions (and he failed to score tonight, so expect him to sit for Ben Eager tomorrow) and saw the team trade a 4th round draft pick for a player that may actually be worse than each and every member of the team's already under-achieving roster. Let's just say that holding out hope for them to run the table on the final three games may not be realistic.
If you think tonight's game stunk...you're right. The specific odour you're smelling is Steve Tambellini defecating on your hopes of a brighter future for the Oilers.