Eberle is in a once-in-a-lifetime slump, or is he?

One of the odd things about the debate over Jordan Eberle's underlying numbers is the sentiment expressed by dawgbone in his recap of Eberle's standing in our Top 25 Under 25, namely, that Eberle is now being "punished" by for being overly lucky last season. While part of what db says is correct - Eberle is in for a bit of a bounce from his current shooting numbers - but it's not as if Eberle is terribly unlucky right now.

After Eberle played in his 160th game, I broke his career out into 10 separate 16-game segments. His shooting percentage in each segment is reflected below. The last segment is the current one and totals only 9 games.

My takeaway from the table above centers around two things:

Below is a line graph displaying the moving average of Eberle's career shooting percentage in game-by-game format. Note the arc created by the 32 game heater. 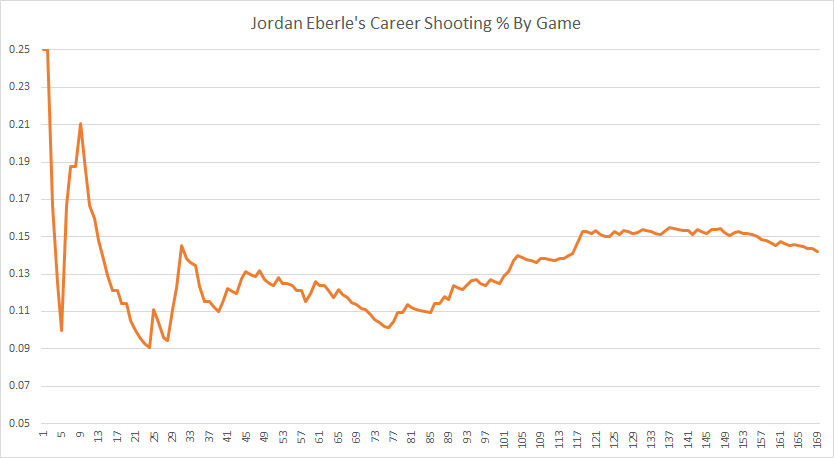 I put all of this together because of the sentiment that is bubbling up around Eberle's season. The sentiment that this run is an aberration and he'll be back to the Eberle we know in no time. "This is just bad luck." In the table below I've stolen a concept that Scott Reynolds loves: you can't toss out the exceptionally bad streaks without tossing out the exceptionally good streaks. It's sound logic. If you're looking for the predictive performance, the heart of the bell curve, you toss out the whale tails, but understand that they can happen at any time.

The segments detailed below are his two best and two worst 16-game segments. A quick, non-mathy analysis of the segments leads us to a predictive shooting percentage for Eberle:

For those of you less statistically-inclined, the exercise performed above, eliminating the tails in search of Eberle's true talent, is an extremely simple, though flawed, method of performing regression analysis without all of that complicated math mumbo-jumbo.

What's the takeaway? Eberle's 18 goals on 77 shots last season was a very rare occurrence that he will be hard-pressed to ever duplicate. His slump this season isn't the most likely outcome, but it's far from rare. In fact, he's likely to go through similar slumps in the future. Reset your expectations for Eberle to shoot between 13.4% and 14.2% and you'll have a much more realistic view of the player and the production you can expect from him for seasons to come.