RNH needs to calm down, watch 'Eat Pray Love', and let the averages kick back in...

There is no doubt that Ryan Nugent-Hopkins is the Oilers number one Centre. The Horcoff-Hemsky flirtation years aside, this team was without one since Doug Weight was shipped to St. Louis in exchange for Marty Reasoner and a crate of Cuban Lunch chocolate bars. I was onside with taking him first overall in 2011, and believe time will eventually show him to be the best pick from that draft.

That being said, I've been taking some heat from my friends lately for being a bit too hard on him on Twitter -- I will admit, I have been noting whenever he seems to have missed the net on a scoring chance or had problems entering the zone. It's not like I've gotten a tattoo in the small of my back saying 'RNH Sucks'... far from it, I think his general play has been rather noteworthy in many other respects and the possession numbers seem to bear this out.

I just wanted to take the time to diagnose what the deuce is going on with this player considering he's got the same points per game rate this season (0.35 PPG - 7 points in 20 games) as Ryan Smyth, a man who plays hockey with a self-made canoe paddle. What could possibly explain this? Let's start with his shooting percentage: 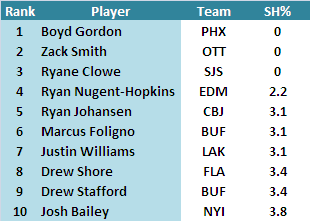 Above is a list of NHL forwards who've played in at least 10 games this season with more than 15 minutes of ice time per game sorted by worst overall personal shooting percentage. After the last three players in the NHL yet to score under such parameters, RNH has the 4th worst shooting percentage in the entire league. I think it's safe to say that RNH isn't the 4th least accurate shooting in the entire league and that the small sample size of this season is wreaking havoc. Brad Marchand is shooting 29.7% right now -- do we really believe Marchand is 13 and a half times more accurate than RNH? No, of course not. This rate will come up. If RNH had been shooting at anywhere near league average right now, he'd have created another 3 goals.

It's a well-known fact that the Oilers are having problems scoring at even-strength this year, but that can't really be said of their top line in general. RNH's rate of 'goals for' while on-ice at even strength is decidedly mid-pack compared to other forwards in the NHL even though only 6.59% of all even strength shots go in the net while he's on the ice. This is a further reflection of how the Oilers top line is out-shooting the opposition. So if the Oilers' top line is ok at producing at evens, how come he doesn't have many points? Well, he simply doesn't get in on the scoring when it happens... 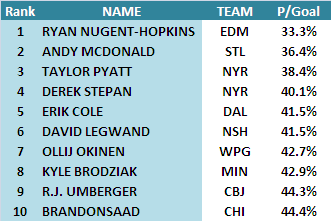 This list shows the percentage of goals that a player got a point on while he was on the ice at even strength -- listed are the bottom 10 players in the NHL in this metric who've played at least 10 games with more than 11 minutes of even strength ice time (this whittles the list to about the top 8 forwards on each team). RNH sits right at the top, only getting a point on a third of the goals scored while he's on the ice at even strength. A quick rule of thumb seems to be that the average forward gets in on two-thirds of the goals scored when he's on the ice, meaning RNH is at about half the average. This fact alone has short-changed him out of about 4 points this season.

How does RNH do while on the powerplay? 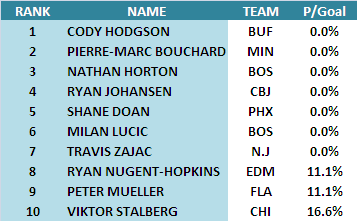 Add these all up, and RNH could have had 11 more points this season just by being at league averages. Added to his 7 points, this would be a very respectable 18 points in 20 games played, or 0.90 PPG. This would have placed him 3rd on the Oilers behind Taylor Hall (1.00 PPG) and Sam Gagner (0.95 PPG).
I wrote a post earlier this year suggesting that RNH would have to score greater than 0.84 points per game this year to have a shot of eventually becoming a 100 point player. His 0.35 PPG so far this season is obviously a huge, huge disappointment, as he's half a point per game shy of that. But hopefully this post has put you in a better mood -- if he had hit league averages so far this year, he would be well within range of the mark.
RNH is still a very, very good hockey player. I wouldn't feel a whit of surprise if his production started to normalize very soon. He's due.